Tubridy goes from bland to bitter and a little bit creepy

Radio review: Tubridy's not bothered about projecting a mainstream image while on 2FM Conor McGregor’s friends and foes get in the ring 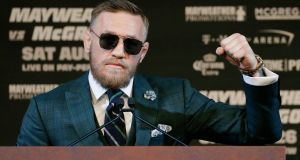 He may be RTÉ’s best-paid broadcaster, but Ryan Tubridy doesn’t seem unduly bothered about projecting a wholesome mainstream image. During his opening monologue on Tuesday (The Ryan Tubridy Show, RTÉ Radio 1, weekdays) he informs listeners that he finds “horror clowns” funny. As if this revelation isn’t odd enough, he adds for good measure, “You know what else I love? Creepy ventriloquists’ puppets.” Tubridy tells us all this in a flippant tone, but it all seems a bit, well, creepy.

In fairness, these admissions are prompted by the forthcoming screen remake of It, the film based on Stephen King’s horror novel about a murderous clown. Nevertheless, it makes for a decidedly weird moment. But at least it’s good-natured, unlike his mini-rant about Instagram.

He proclaims his disdain for the images of quotidian minutiae that clog the photo-sharing app. “Unless I’ve got it completely wrong, and the pictures of your food and children are enlightening and hilarious and are going to enrich my life. But I don’t think so.” Again, this is meant to be witty, but in this case merely comes across as sour. (Then again, he is a fan of horror clowns.)

It’s an example of how Tubridy, who used to be charged for being both too clever and too bland, increasingly seems bitter as he bemoans the mores of modern life.

This tendency even creeps into his otherwise enjoyable interview with Noah Hawley, novelist and screenwriter of the television drama Fargo. Referring to a character in Hawley’s novel Before the Fall, Tubridy applauds his guest for being “the first person to fillet hipster phenomenon”, which is akin to congratulating someone for shooting fish in a barrel. Hawley demurs, preferring to look beyond the surface superficialities – what Tubridy describes as “the beard and the craft beer” – of a character who is, after all, fictional. Their conversation yields some perceptive observations – “Opinion is replacing everything else,” Hawley notes – but Tubridy’s focus on the annoying behaviour of his guest’s fictional millennials is notable.

In fairness, Tubridy isn’t a kneejerk anti-PC curmudgeon. He also talks to author Angela Nagle, to discuss how hostility to political correctness has fed into the rise of the alt-right in America. Nagle is careful not to lump the bulk of Donald Trump’s electoral base in with the white supremacist movement, while Tubridy, for his part, is disparaging about the misogyny of many of the “dispossessed fellas” who rooted for the US president.

But he still characterises those on the opposite side of the alt-right as “snowflakey”. “I need my safe space, you bring down that statue, you can’t order that food because it offends my worldview,” he riffs, by way of characterisation. As a man who values “moderation” and displays an instinctive decency in his encounters, Tubridy will surely know that sensitivities about diet or ethics, however strident and po-faced, are not as poisonous as racism or misogyny.

He remains an engaging interviewer, particularly with guests as stimulating as Hawley and Nagle. And he can be genuinely funny, even on delicate matters: the alt-right march in Charlottesville, he says, was “just short of the sheets and the pair of scissors”. But in venting his irritations, he shouldn’t lose touch with his wholesome side.

Politeness and civility aren’t traits automatically associated with Conor McGregor, the Dublin-born mixed martial arts (MMA) superstar and now professional boxer. With the Dubliner’s much-hyped bout against Floyd Mayweather looming on Saturday night, MMA: Love it or Hate it? (2FM, Thursday) took the opportunity to debate the frequently brutal sport in which McGregor made his name.

From the outset, it’s obvious that rhetorical subtlety is unlikely to be the hallmark of the debate, which can also be found on 2FM’s new digital hub, the Collective. For one thing, as host Keith Walsh informs listeners, the programme is being recorded in a boxing ring: he even has a bell to hand in case things get out of hand. Things start disappointingly, at least for those listeners hoping for a scrap, with documentary-maker Mike Sheridan and MMA fighter Ash “the Bash” Daly making the case for the sport in almost reasonable terms.

As for the doubters, Olympic silver-winning boxer Kenneth Egan praises the dedication of MMA fighters, even as he admits to knowing little about the sport’s technicalities. Egan is a bit more forthright about McGregor, criticising his swaggering style and his profane language in particular: “The way he carries himself is a bit harsh.”

The arrival of former MMA fighter Paddy Holohan warms proceedings up further. Holohan, who is friends with McGregor and trained with him regularly, takes issue with a mocking tweet that Egan posted about MMA after McGregor’s first professional victory in the sport. “It wasn’t a joke, it wasn’t nice, it was horrible,” says Holohan. Given the epic level of offensive (and racially-charged) trash-talking in the build-up to the McGregor-Mayweather fight, Holohan comes across as easily hurt, but his wounded note stems from the fact that he had previously cheered on Egan “because he was Irish”.

Egan, for his part, feels that McGregor “insults” the sport of boxing, even as he concedes that “Mayweather is a scumbag as well”. Holohan, in turn, picks up Egan for his telling “as well” comment. For a moment, it looks like Walsh might need to clear the ring.

In the end, Egan and Holohan have made up sufficiently to give informed predictions for the fight. And though it finishes in an inconclusive “agree to disagree” stalemate, the debate is decidedly respectful, though it conspicuously dodges the troubling racial and homophobic aspects surrounding the McGregor-Mayweather fight.

Still, when you have to look to professional fighters for good manners, you know things are bad.

Part history, part whodunnit, the Documentary on One: An Unholy Trinity (RTÉ Radio 1, Saturday) delves into the murky 1923 murder of Dr Paddy Muldoon in Mohill, Co Leitrim. With a plot worthy of a conspiracy thriller, Tim Desmond’s documentary starts with the abandonment of a baby by a devious local priest, Fr Edward Ryans, which leads to a killing that pulled in the Catholic church, the IRA and the newly founded Free State, shattering several lives along the way. It’s a shadowy snapshot of Irish society at the time, while telling a poignant family story. Utterly riveting.