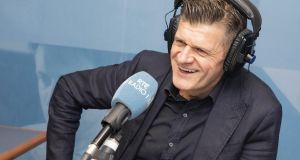 Over the years Brendan O’Connor has dialled down the sardonic sneer [...] and he’s now an empathetic interviewer who wears his knowledge of books, culture and history lightly. Photograph: Kinlan Photography

A friend recently lamented to me that he appeared to have moved abruptly from “promising” to “veteran” without an intervening middle period. That experience may become more common in future, as deferred adulthood and increased longevity stretch the definitions of “young” and “middle-aged” beyond their traditional breaking points.

Recent US political developments notwithstanding, it’s likely to remain the case that much of the heavy lifting in society will continue to be done by those between 35 and 55. So it may seem odd to ask whether their voice is being heard. But if, like RTÉ Radio One, you’re seen as the voice of middle Ireland, it’s an existential question. If the station isn’t recruiting thirty-somethings in sizeable numbers, it’s in trouble.

For traditional linear broadcasters, finding the right balance and tone across the day is vital for maintaining listener loyalty in a fracturing media landscape. The tricky bit is knowing when and how to effect a changing of the guard without alienating older listeners. Public service broadcasters with multiple channels have the advantage of being able to develop talent in niche slots before moving them to prime time. At least that’s the idea. Historically, RTÉ hasn’t always managed this process very well, but it has recently used its Late Debate programme as an effective proving ground.

And last year, two events, one predicted (the retirement of Sean O’Rourke), the other unexpected (the sudden death of Marian Finucane), have afforded the opportunity to undertake a profound shake-up of the schedule. The reshuffle has seen changes in the key mid-morning and drive-time slots, as well as in the increasingly important weekend schedule.

These changes have made a difference. The voice of Radio One now feels more in sync with the perspectives and concerns of the people we used to call middle-aged. For a start, the new crop, unlike their predecessors, appear to have some knowledge of the popular culture of the last 20 years; they are not astonished by the internet; some of them have young children. In their cultural references, life experiences and even their manner of speaking, presenters such as Sarah McInerney, Cormac Ó hEadhra, Katie Hannon and Brendan O’Connor have definitely left the ranks of the promising but have some way to go yet before they become veterans.

It might seem absurd to suggest that these broadcasters, some of whom have decades of experience in print and other media behind them, were only on the foothills of their careers until last year, but the fact is that they now, for the first time, find themselves fronting the most important shows on the country’s most popular station (Claire Byrne, who has been at or near the top for longer, is of the same generation). It’s hardly a youthquake, but the baton has clearly passed on from the baby-boomer generation.

In some cases, to be honest, it should have happened sooner. Tributes have rightly been paid to the great broadcasting career of Marian Finucane, but the show which bore her name had long passed its sell-by date. Under O’Connor, who had been Finucane’s regular stand-in for some time before he took over, the format hasn’t changed much but the quality has.

Weekend radio tends to get reviewed less than the weekday variety, for no other reason than the production schedules of newspapers, but the Brendan O’Connor Show is very good.

Over the years O’Connor has dialled down the sardonic sneer he favoured in earlier broadcast outings, and he’s now an empathetic interviewer who wears his knowledge of books, culture and history lightly. He has, in short, grown up (a welcome development, since he’s now in his 50s).

Unlike their predecessors, many of the new crop of household names have done stints with RTÉ’s rivals, Newstalk and Virgin Media, as well as with national newspapers. Which raises the question of how rivals will respond to the challenge, particularly if RTÉ’s new approach starts paying dividends in listenership figures (it’s too early yet to judge whether this is the case).

Outgunned when it comes to production resources, independent talk radio programmes have traditionally differentiated themselves by being more nimble, more irreverent and more personality-driven than the staid public service broadcaster.

That model – established way back in the 1990s by Eamon Dunphy and his team on Today FM’s the Last Word – looks harder to achieve against a younger, feistier Radio One line-up. In particular, the new fizzy version of Drivetime energetically presented by McInerney and Ó hEadhra must surely be causing collywobbles in Newstalk and Today FM. Interesting times ahead.