Five of the best TV shows to watch this weekend 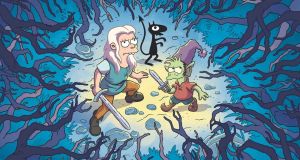 Disenchantment
Friday, Netflix
Imagine a fairy tale without a happy ending, in which Jack gets eaten by the giant, Cinderella doesn’t go to the ball, and Sleeping Beauty never comes out of her coma. If that sounds like your kinda fairy tale, then Disenchantment could be for you. Matt Groening’s new series is set in the medieval kingdom of Dreamland, a place that has seen better days, and follows the misadventures of princess Bean, her elf companion Elfo and her personal demon Luci. Potential princely suitors should be warned: princess Bean might have a teensy weensy drink problem. Groening insists that Disenchantment is not going to turn into a parody of Game of Thrones, although there’ll be a few GoT gags thrown in.

It’s a busy summer, what with all the barbies, beers and beaches. Time to take a break to reflect on the important thing in life (er, I thought they were the important things in life). Brendan O’Connor’s new three-part series – basically a holding series until the return of his Cutting Edge series in the autumn – has a simple premise: he pulls up a chair, sits down with a celebrity or public figure, and has a nice aul’ chinwag about the things that really matter. Sounds not a million miles away from Gaybo’s The Meaning of Life. Can Uncle Brendo get under the skin of his guests and bring out their real selves? His guests are Majella O’Donnell, Michael Harding and Chic guitar legend Nile Rodgers. We’ve been promised no bells and whistles, although the Rodgers interview takes place in the legendary Abbey Road Studios. I’m impressed.

After the Beast from the East and one of the hottest summers since 1976, the effects of climate change are at the forefront of many people’s minds. Of course for others, such problems never went away. When the hole in the ozone layer was discovered years ago, scientists faced a race against time to warn two of the biggest figures in world politics in the hope they’d take action. This documentary examines how experts spotted the giant hole in the stratosphere and persuaded unlikely eco-warriors Ronald Reagan and Margaret Thatcher to do something about it.

In 1980, Noel Edmonds took over as host from Angela Rippon of a modest BBC series called Top Gear. Decades later, Edmondsis still passionate about cars, as this series proves. However, there should be an interesting dynamic as he will be taking part in the Endurance Rally Association’s Road to Saigon event. That kicks off in northern Thailand and travels 3000km through Cambodia and Vietnam. Edmonds will be joined by his wife Liz in a MGB GT. Also taking part are Martin and Shirlie Kemp in a 1972 Mini; mother and daughter Andi and Miquita Oliver in a 1959 Morris Minor, and friends Tinchy Stryder and Jordan Stephens in a Hillman Imp.

There have been several Superman-related TV series over the years. Some were great, like Smallville, and others less good. It remains to be seen whether the latest is as super as fans hope. Set a couple of generations before the destruction of Superman’s eponymous home planet, it follows Seg-El, the Man of Steel’s grandfather, who is faced with a life-and-death conflict: to save his home planet or let it be destroyed in order to restore the fate of his future grandson. The cast includes rising Brits Cameron Cuffe and Bafta-winner Georgina Campbell.