Nailed It!: The perfect show for terrible bakers

Reality TV: The US hit is like the worst bits of ‘The Great British Bake Off’ – but it works 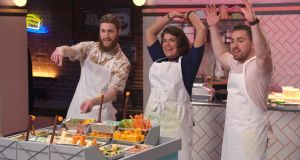 Nailed it! No, they really didn’t

Perfection is overrated: this is the premise of Netflix’s baking show Nailed It! (now on its second series), which gathers together a group of severely average home bakers and tasks them with replicating a selection of extravagant cakes and fancy goods, gleefully documenting their rubbish attempts and glorious failures.

Every part of Nailed It! is like a montage of the worst bits of The Great British Bake Off imaginable. It’s an entire series of Iain emptying his sodden Baked Alaska into the bin. It’s the oversized, gaudy, shouty id hidden within Bake Off’s genteel, harmonious goodness, a discount packet of Mr Kipling stuck next to the towering buttercream constructions from the divine tent of dreams.

Presenter Nicole Byer and French pastry chef Jacques Torres (aka Mr Chocolate) barely keep a pretence of professionalism, acting like a pair of giddy kids. Torres’s solemn facade constantly cracks like badly made icing as he cannot help but giggle at the ludicrousness of the shambolic contestants’ ideas, while Byer, rather than offering encouragement, distracts the competitors with comments about how terribly they are doing.

This may seem harsh, but the participants are truly awful. From hapless Chris filling his cupcakes with salt instead of sugar to Christina mashing all the layers of her wonky unicorn cake together into one purplish mush, replete with an obligatory hair. “I’m happy there’s no hair in here. There’s usually hair in everything I make,” she laughs dementedly while leaving her long red tresses recklessly dangling about her shoulders.

Texan housewife Leanne is so cack-handed she even manages to burn a packet of microwave popcorn, almost smoking out the studio. Her fellow contestants struggle to melt cheese or chop vegetables correctly.

Viewers and critics alike may sneer at Antoni from Queer Eye’s basic efforts assembling crudités and simple guacamole for the “heroes” on their show, but upon seeing the Nailed It! culinary catastrophes, it makes sense that he wants the preparation to be easy for those not au fait with the inside of an oven.

Nailed It! could be accused of being a continuation of the cavalcade of cruelty that constitutes a large part of reality TV, with cheap laughs at the expense of others. There is the irony of the would-be bakers having to reveal their usually monstrous creation from under a cloche and shout “nailed it!” as their radioactive effort sits oozing alongside a picture of the perfect original. But there is something about these epic fiascos that makes it more human and appealing. There is no “wow factor” or smirks of smugness from contestants but more of a “Will this do?” relatable shoddiness.

No one is better than anyone else. Everyone is united in cheering for the cast of underdogs, just hoping that the set’s kitchen doesn’t burn down or that someone ends up losing their finger in the blender.

There is no educational value to the show, no Bake Off boring bits where a woman makes madeleines in an oven from the 18th century. No one truly improves or learns anything. There are a few cookery tips spattered about to make it look like there is a point to it all, but nothing substantial enough to be properly useful. It’s the Generation Game of baking shows, slicing away at the talent until all you are left with is a bunch of people covering themselves in dough screaming at each other.

The comical cultural difference in the way it chooses to reward its winners is part of its brash brilliance. Being an American show, the successful baker can bounce off with $10,000 for not poisoning anyone, whereas on Bake Off they get handed a bunch of flowers at an imaginary village fete after spending nine hours sculpting the Mona Lisa out of profiteroles.

Nailed It! possibly promotes the exasperating modern trend where everyone is rewarded for taking part – it is a celebration of the utterly mediocre – but its winning formula is the way it elevates the best of a bad bunch. In a landscape dominated by chefs and amazing amateur cooks with perfectly manicured marzipan and sensational sugar-craft, Nailed It! is feel-good telly for those who are constantly made to feel bad about their limited abilities.