11 of the best TV shows to watch this week 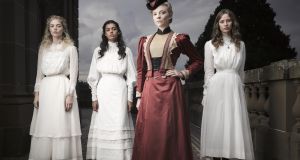 Picnic at Hanging Rock: this six-part adaptation will set out to find the answers to what really happened

Puppy Love
Monday, BBC1, 7.30pm
Some mutts would much rather roll around in something smelly or run through a muddy puddle than subject themselves to a bath. But there are dogs who have a taste for the finer things in life and enjoy being well turned out – which is where Mucky Pups, Wales’ first and the UK’s biggest, doggy boutique and spa business Wales’ first doggy boutique and spa, comes in. It offers “pawdicures”, blueberry and vanilla “furcials” and for the discerning pooch, the full-day “Dogfather” treatment, complete with a massage and canine cologne. This documentary discovers how its owner Leanne has become one of Wales most successful young female entrepreneurs, and meets some of the staff and customers.

Sharp Objects
Monday, Sky Atlantic, 9pm
Amy Adams stars in this dark crime drama based on the book by Gone Girl author Gillian Flynn. Adams stars as a troubled, alcoholic reporter working for a newspaper in St Louis. When the paper sends her back to her rural hometown to cover a series of unsolved child murders, she soon finds herself pulled back into her own traumatic past. With Little Big Lies director Jean-Marc Vallee at the helm, and the producers of Get Out behind the series, Sky is expecting nothing less than another True Detective.

Stonemouth
Monday, RTÉ One, 10.40pm
Eyebrows arched in 2015 when the BBC decided to adapt the novel by Iain Banks in just two hour-long parts. Many felt the Beeb could have stretched the story to at least six episodes, but budget constraints were blamed for the short running time. Still, here’s another chance to catch this mini-mini-series, and sure it won’t detain you long. Christian Cooke stars as Stewart Gilmour, a man returning to his small Scottish seaport home of Stonemouth for the funeral of his best friend. The verdict was suicide, but Stewart is not convinced, so he sets out to find out the truth. Things are a bit complicated, however: Stonemouth is run by two rival gangs, the Murstons and the MacAvetts, and Stewart used to be engaged to one of the Murston clan. That was before he had to suddenly skip town following a sexual indiscretion at a wedding. Now he’s going to have to tread softly on old ground and avoid stirring up any hornets’ nests.

John Curry: The Ice King – Storyville
Monday, BBC4, 10pm
One of the joys of documentary films is the speed with which they arrive on TV, and while ice skating drama I, Tonya stole a lot of critical thunder earlier this year, this non-fiction offering proved just as compelling. It reveals how the Birmingham-born ice champ turned a dated sport into an art form. John Curry also made history by becoming the first openly gay Olympian in an era when homosexuality was not fully legal. The archive footage might be hit-and-miss, but the interviews with his family, friends and collaborators are fascinating.

The Rise and Fall of Nokia
Tuesday, BBC4, 9pm
In its pomp, the Finnish company Nokia not only made the world’s best and most innovative mobile phones, it also boasted an annual budget larger than that of the Government of Finland — and everyone who worked for the company got to share in the windfall. Yet in 2016, phone production in Finland ceased. This documentary explores Nokia’s story, asking if global domination hampered the company’s original pioneering spirit, and hears from some of the people who experienced the rise and fall first hand.

The Split
Tuesday, RTÉ One, 10.40pm
Another chance to catch this legal drama, first aired on the BBC a couple of months ago, and following the courtroom twists and turns of a family of feuding divorce lawyers. Nicola Walker stars as Hannah Defoe, a brilliant divorce lawyer who, with her mother Ruth and sister Nina, helps the rich and famous of London whose marriages have broken down. But when a row breaks out between the three women, Hannah is forced to leave the family firm and set up in rivalry to her mother and sister.

It will come as no surprise that Hannah’s new job puts her back in contact with an old flame, and of course her estranged father will choose this particular time to come back on the scene after 30 years. If you can ignore the many legal inaccuracies that allegedly riddle this series, you might enjoy the learned sibling rivalry. The BBC have recently announced that season two of the series will air in 2019, so now’s your time to catch up.

Picnic at Hanging Rock
Wednesday, BBC Two, 9.05pm
Joan Lindsay’s 1967 bestseller was made into a hit movie by Peter Weir in 1975, and now has been reimagined as a six-episode TV series, but instead of leaving the mystery hanging there, this adaptation will set out to find the answers to what really happened at Hanging Rock. Natalie Dormer (Game of Thrones) stars as Hester Appleyard, the headmistress of a school for privileged young ladies. The three star pupils, Irma (Samara Weaving), Marion (Madeleine Madden) and Miranda (Lily Sullivan), are on the brink of womanhood and showing a rebellious streak – which will soon clash with their headmistress’s sadistic streak. Expect sexual subtexts, class issues and red herrings as the pupils and staff of Appleyard College, the wider community, and the local law enforcement try to unravel the secrets of Hanging Rock.

Keeping Faith
Thursday, BBC1, 9pm
It may be new to some viewers, but this drama has already broken records. When Keeping Faith aired on BBC Wales earlier this year, it became Wales’ most-watched nonnetworked drama in 20 years, while there have been more than 9.5 million requests to watch it on iPlayer. So, it’s no surprise that the BBC has already commissioned a second series and is now showing the first run to a wider audience. It stars Eve Myles as lawyer and mother Faith, who is forced to cut her extended maternity leave short after her husband and business partner disappears. She takes on the case of a vagrant accused of shoplifting, while also searching for answers about her spouse.

Celebrity Sextortion
Thursday, C4, 10pm
In November 2016, former ITV breakfast host Dan Lobb was shocked when a secretly-recorded video of him committing a sexual act leaked online. The video was taken from a Skype sex session he’d had years before with a girl called Staci, a Twitter follower he’d been flirting with online. And Dan soon discovered that he wasn’t the only one: dozens of other British male celebs had had similar videos leaked as well. But who was Staci? Did she even exist? And if not, then who had recorded him — and why? This extraordinary film follows Dan on a mission to find out the truth behind his own video. His investigation takes him into an unknown world of online sextortion and celebrity sex-tape collectors, and finally brings him face to face with the people responsible for leaking the sex tape online.

First Night of the Proms
Friday, BBC2, 8.30pm
At London’s Royal Albert Hall, the new season launches with a feast for the eyes and ears in the world premiere of Five Telegrams, with music by Anna Meredith and stunning digital projections by 59 Productions marking the centenary of the end of the First World War. The all-British programme also features Vaughan Williams’ pre-war choral masterpiece Toward the Unknown Region, along with Holst’s evergreen Proms favourite The Planets – the first piece Mars, Bringer of War, famously anticipates the onset of mechanistic warfare. The BBC Symphony Orchestra, under conductor Sakari Oramo, is joined by the combined forces of the BBC Symphony Chorus, the National Youth Choir of Great Britain and the BBC Proms Youth Ensemble. Presented by Katie Derham.

8 Out of 10 Cats Does Countdown
Friday, C4, 9pm
Regulars including hitherto perennial host Jimmy Carr are nudged to one side as Canadian comedian Katherine Ryan hosts an all-female and the first edition of the new series of the words-and-numbers quiz, inviting Roisin Conaty and Jessica Hynes to take on Sara Pascoe and Lolly Adefope, as part of a celebration of 100 years of women’s suffrage. As usual, Rachel Riley is at the letters and numbers board, while Morgana Robinson appears in character as EastEnders’ Natalie Cassidy alongside wordsmith Susie Dent in Dictionary Corner.