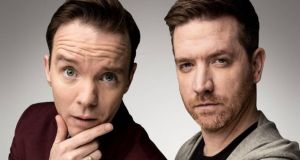 The old notion that a broadcaster should be a role model of probity and integrity seems quaint in an era of institutional distrust, fake news and Operation Yewtree, the investigation by British police into historic sex offences.

In fairness to Dermot Whelan and Dave Moore, they don’t normally discuss X-rated movies for their audience. The reason for highlighting this particular online video is that it has an Irish connection. In the audio clip played by the presenters, the plot (if that’s the right word) involves a woman in a car being pulled over by a guard, or as Moore puts it, “an upstanding member of the gardaí”.

The hosts leave what happens next to the imagination, though presumably the video doesn’t do so. But just in case anyone is curious, the pair direct listeners to their show’s website, where a non-pornographic excerpt of the video has been posted to facilitate further investigation.

Leaving aside the dubious ethics of pornography, this may be harmless enough, no more than saucy seaside postcard fare for the digital age. After all, Whelan and Moore have built their brand as raucously irreverent presenters, and their regular listeners are likely to share those sensibilities. They’re laughing at the ludicrousness of the video, not recommending people to watch it. But there’s still something icky about the item, symptomatic of a general coarsening of tone.

Where Today FM’s mid-morning slot once had Ray D’Arcy holding court in his would-be everyman fashion about everything from pop to politics, now it is essentially one long jokey conversation on trivial topics padded out with a generic chart soundtrack. By normal standards, Wednesday’s show is actually a busy one. There’s the usual ration of filler, such as Moore’s gleefully useless factoids about Ikea, and a good-natured conversation with a Cork schoolgirl called Mary who is applying for a “space scholarship”. But the hosts also interview comedian Tommy Tiernan, which is the closest the pair get to heavyweight subject matter.

This largely consists of Tiernan chatting about his chat show, and joking about Mary’s ambitions to travel to outer space. “I think she’d be better taking a fistful of magic mushrooms and heading to the Burren,” Tiernan says. One assumes he’s making a misfiring crack rather than advocating schoolchildren use hallucinogens, but it captures the self-satisfied air of the interview.

All in all, one expects something slightly better from a flagship show on a mainstream station. That the pair helm such a high-profile slot underlines the gradual shift in direction on Today FM, where music and patter have all but replaced more substantive speech content, Matt Cooper’s drivetime show, The Last Word, being the exception.

Still, Whelan and Moore can deliver the odd good gag, as when they ponder the prospect of interplanetary travel. “You have to laugh,” says Whelan, “Elon Musk says by 2040 we’ll be on Mars. In Ireland, we’re saying that by 2040 Roscommon will have broadband.” At least Dermot and Dave can let listeners there know what they’re missing online.

The air also turns blue on Tuesday’s edition of Lunchtime Live (Newstalk, weekdays), though, this being former GP Ciara Kelly’s show, it’s for medical reasons. Psychotherapist David Kavanagh joins Kelly for the programme’s regular slot on relationships, to talk about the problem of erectile dysfunction. It’s a serious subject, but one which nonetheless has the frisson of the forbidden so useful for grabbing audience attention. “This is a grown-up slot,” Kelly says, as she cautions parents to turn young ears away from the radio, and by implication to keep older ones glued to it.

Kavanagh has some useful advice for those dealing with sexual performance issues, including highlighting how psychological pressures can exacerbate the problem between couples. But after a while, such is the stream of euphemisms – “standing to attention”, “rock solid” – that it sounds less like an advice slot than the script for a Carry On film.

“We didn’t get to do premature ejaculation,” says Kelly in conclusion. “We’ll have to do that another day.” Such tittering remarks ensure the casual listener remains as engaged as those who have to deal with the unfortunate condition.

At least Kelly’s discussion with Kavanagh is memorable, albeit in a guiltily puerile way. There are other times when her show seems like one long succession of advice slots.

On Wednesday, Kelly has guests answering questions on skincare and transport, while chef Gary O’Hanlon makes his regular appearance for what the host calls “my favourite time of the week”. Taken individually, each item is fine, casual in manner but practical in intent, much like a consultation with a good doctor. But the cumulative effect is to tamp down interest or anticipation for the programme. Being a responsible role model is fine and good, but Kelly could do with a few more entertaining or thought-provoking items. Just don’t ask Dermot and Dave for advice on videos to spice things up.

It’s a truism that after seven years of civil war in Syria, people here have become numb to news of atrocities there. But Wednesday’s edition of Morning Ireland (RTÉ Radio 1) provides a jolting reminder of the suffering behind the headlines. Reporter Aisling Kenny speaks by phone to Hamdan, a resident of East Ghouta, the Damascus suburb under appalling bombardment by Syrian government forces.

Hamdan talks of the despair felt by those living there as well as his grim determination to stay. But as he describes huddling in the corner of his house, his two-year-old daughter can be heard crying. “Don’t cry, don’t cry,” he says, before explaining to Kenny that “she is so afraid”. It’s terrifying and heartbreaking. Listeners here can simply turn off the radio, of course. Hamdan and his family aren’t so lucky.