British actor and TV presenter Stephen Fry has announced that he has had his prostate removed following a cancer diagnosis in late 2017. Video: stephenfry.com 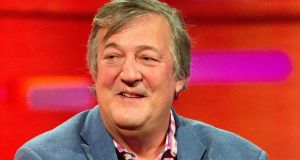 Actor Stephen Fry had his prostate removed in January after being diagnosed with cancer in December, and he has said “it all seemed to go pretty well”. File photograph: Isabel Infantes/PA Wire

Actor and TV presenter Stephen Fry (60) has urged “men of a certain age” to get themselves checked for prostate cancer as he revealed he has recently undergone surgery for the disease.

Fry had his prostate removed in January after being diagnosed in December, and said “it all seemed to go pretty well”.

Fry shared the news in a video posted on his Twitter page, alongside which he wrote: “For the last 2 months I’ve been in the throes of a rather unwelcome and unexpected adventure.

“I’m sorry I haven’t felt able to talk about it till now, but here I am explaining what has been going on.”

He said it was “all very personal and undignified so I might as well bite the bullet”, before explaining that he had seen his doctor in December in order to get a flu jab, but that it was discovered that he had cancer.

He said: “They took the prostate out, they took 11 lymph nodes out, the various bits that were taken out were examined and it turned out I had a Gleason Score of nine after considering 10 is the maximum – it was clearly an aggressive little bugger.”

Fry, who pulled out of presenting the Bafta Film Awards this year after more than a decade, said he wanted to keep out of the public eye “because you want to get better without strangers sending you cards and letters”.

He paid tribute to his family and his “divine and darling” husband Elliott Spencer, who he said “were just marvellous, and those few friends who have known have been very discreet and kind about it”.

The former QI host said that “as far as we know it’s all been got” and that he is “fit and well and happy” at the moment.

He continued: “It wasn’t a fight, I just submitted and let the surgeon [proceed].

“I generally felt my life was saved by this early intervention, so I would urge any of you men of a certain age to get your PSA levels checked.”

He said he is “fortunate” to have caught the disease, and added: “Here’s hoping I can get another few years left on this planet because I enjoy life at the moment and that is a marvellous thing to be able to say, and I would rather it didn’t go away.”

Prostate Cancer UK thanked Fry for “speaking about his personal experience”, because “awareness like this is so important”.

Angela Culhane, chief executive at Prostate Cancer UK, said: “Prostate cancer is the most common cancer in men. There are over 47,000 men in the UK who, like Stephen Fry, are diagnosed with prostate cancer every year.

“However, despite the numbers, it’s a disease that, due to its nature, is often swept under the carpet.

“We salute Stephen for his courage in speaking out about his personal experience and wish him all the very best for his recovery.

“As Stephen says, one in eight men will get prostate cancer in their lifetime, and it’s now the third biggest cancer killer.

“But if it is caught early, it can more often than not be treated successfully, which is why awareness like this is so important.

“It is crucial for every man to acknowledge the threat that prostate cancer can pose to his life.

“Some men in particular face a higher-than-average risk and so if you are over 50, black, or have a family history of prostate cancer, it’s important that you speak to your GP about the disease.” – Press Association