Netflix: The 10 best new shows and films to watch in February

Nightcrawler director Dan Gilroy once again teams up with Jake Gyllenhaal and Rene Russo in this acerbic art-world horror story. 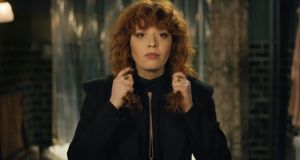 Alex Lehmann’s Netflix film Blue Jay was a small but beautifully formed indie-flick about intimacy and the necessary disintegration of first love, it’s follow-up Paddleton is also concerned with dissecting the minutiae of relationships but this time it’s a platonic one. Mark Duplass and Ray Romano star as two oddball neighbours, best friends who end up on a physical and emotional journey through America putting their breezy bromance to the test when one of them is diagnosed with terminal cancer.

Nightcrawler director Dan Gilroy once again teams up with Jake Gyllenhaal and Rene Russo in this acerbic art-world horror story. Gyllenhaal plays revered and feared art critic Morf who becomes entangled in the lives of a domineering, ex-punk singer, gallery owner Rhodora (Rene Russo) and her assistant Josephina (Zawe Ashton) When Josephina discovers a trove of artworks made by her dead neighbour, the mysterious, undiscovered artist, Vitril Dease she transforms him into a posthumous celebrity with his haunting works becoming sought after by the tastemakers of the L A art-scene. Unfortunately for these new owners, the pieces appear to be supernaturally possessed and begin to malfunction, murdering anyone who comes in contact with them.

A comically, unsubtle commentary on the insidious nature of commodifying art, Velvet Buzzsaw is an exaggerated take on the insular, delusional artworld. A cynical look at those easily lampooned connoisseurs and critics whose preconceived notions and pretensions ultimately prevent them from understanding the true value of art.

Described by its writer, George R R Martin as “Psycho in space”, Nightflyers is a sci-fi horror series set in 2093 when the Earth is on the verge of destruction. A team of scientists and a trusty telepath head out into the galaxy to try to make contact with alien life in a bid to save mankind from oblivion. The crew are soon exposed to mysterious outside forces and must adapt to the claustrophobic atmosphere, fostering a sense of paranoia within the Nighflyer ship as the strangers and misfits are forced to depend on each other.

Starring the electrifying Natasha Lyonne, Russian Doll is the story of Nadia, a tough talking, uncompromising video games creator who is doomed to continuously relive her death on her 36th birthday, returning to the moment just before her demise again and again. Like Groundhog Day, the series sees Nadia attempting to figure out the rules of this demented Chinese puzzle version of her life, using it to her advantage and eventually beginning to understand herself more through its looping repetition.

Concocted by Amy Poehler, Lyonne and playwright/director Leslye Headland, it’s an absurdist comedy flecked with melancholy. Tackling a range of big themes from grief to loneliness to debilitating insecurity with a burning intelligence, it’s a series that crackles with energy, a thrilling meditation on the flawed game of life.

As with all Soderbergh films there is a heist-style, fraudster element to the tale with Ray trying to placate the white, millionaire team owners whilst convincing Erick to stay with his agency. Like Erin Brockovich and Magic Mike it’s the story of a scrappy underdog coming up against an old institution and their struggles to dismantle it. Shot on an iPhone 7 (Soderbergh’s preferred format) its gritty, lo-tech, renegade style suits Ray’s urgent machine-gun patter and his rapid fire movements across the city, enduring the hustle so he can live the dream.

ReMastered is an investigative documentary show that re-examines some of the most perplexing mysteries and high-profile events in music history. Recent episodes have focused on the murder of Run DMC’s Jam Master Jay, the political shift and transformation of Johnny Cash and the rumoured CIA involvement in the shooting of Bob Marley.

The Two Killings of Sam Cooke explores how the musician who was deeply involved in the Civil Rights movement became an influential figure to other black musicians which led to him being seen as a dangerous agitator by the white establishment within the record industry. The show delves into the circumstances and conspiracies surrounding his untimely death aged 33. Seeking to understand if his outspoken beliefs and political activism caused him to become a target, an advocate that the industry wanted to suppress.

Based on the hit podcast, it follows the true story of Debra Newell and John Meehan. Meehan (Eric Bana) is a charismatic anesthetist who charms his way into the life of interior designer Debra Newell (Connie Britton) commencing a whirlwind romance which sees the couple marry in Vegas soon after meeting. As her daughters become suspicious of this new man in their mother’s life, secrets are revealed and shocking truths come to light.

A paranoid Hollywood thriller that ratchets up the tension to Revenge levels of craziness, fans of surprise Netflix sensation You may have found their perfectly creepy follow up.

What better way to spend Valentine’s Day than watching (and cringing at) a poor nervous singleton embarking on five blind-dates in the hopes of finding someone not entirely repulsive to ask on a second date. This may sound like a very low-concept premise but in this era of rapid rejections, the ‘one and done’ dating culture fostered by apps that constantly promote the idea of the next encounter, pursuing a second date seems almost quaint. Dating Around may be Netflix’s answer to First Dates but it’s up to the audience to see if they’ve captured the right chemistry that makes it worth a second look.

Paris is Us
February 22nd

Suffering from PTSD following a near-death experience as a result of a plane crash, Anna (Noémie Schmidt) now lives her life in a half-world somewhere between fantasy and reality where the past and the present combine and memories dissolve into dreams. This hallucinatory French film fuses the incendiary political climate of contemporary Paris with Anna’s growing confusion and frustration as she tries to navigate a tumultuous relationship amidst a city that is steeped in tragedy.

After smacking her head off a bollard in a subway station when escaping a  mugger, cynical, disenchanted architect Natalie (Rebel Wilson) becomes magically trapped in her own rom-com.  This all-singing, all-dancing, candy coloured version of her life is strictly PG, Natalie is bleeped and censored when she tries to swear (in a nod to the Good Place) and any steamy encounters with Mr. Miley Cyrus (Liam Hemsworth) are sadly left on the cutting room floor. Natalie soon realises that she must endeavour to find real love somewhere in amongst the saccharine mawkishness to break the spell.

A lighter, less troubling version of Amy Schumer’s I Feel Pretty mixed with the sweet silliness of 13 Going on 30,  Isn’t It Romantic is another cute, charming rom-com to add to Netflix’s ever increasing catalogue.

Indecisiveness led to home of The O’Rahilly being demolished
6