Netflix UK and Ireland reveals its most-watched releases for 2019 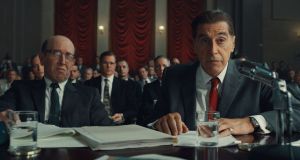 Netflix has revealed its most popular shows and films for 2019 releases – and there are some big names missing from the lists. Most notably, British royal family drama The Crown – the third series starring Oscar winner Olivia Colman premiered in October – failed to make it into the top 10 of the most most-watched releases or of the most popular series.

6 Underground, Murder Mystery and The Irishman were the most-watched movies of the year.

In the series category, there was good news for Irish actor Robert Sheehan. Umbrella Academy, in which he plays a central role, came in at No 5. The top three most-watched series were The Witcher, Ricky Gervais’s After Life, and the much-lauded Stranger Things 3.

Gervais posted on Twitter: “I still can’t quite believe that #AfterLife beat things like #StrangerThings & #You. “What a year.”

The programme also came sixth in the most popular releases overall.

While the platform did not provide exact audience numbers, it said it determines its figures by looking at “the number of accounts choosing to watch at least two minutes of a series, movie or special during its first 28 days on Netflix in 2019”. – PA, agencies

The Disappearance of Madeleine McCann

Conversations with a Killer: The Ted Bundy Tapes

Jumanji: Welcome to the Jungle

The Disappearance of Madeleine McCann

Conversations with a Killer: The Ted Bundy Tapes

The Devil Next Door

I AM A KILLER