A Christmas Carol on BBC review: Guy Pearce’s Scrooge is cruel, but still kind of hot

In this gritty reboot, Scrooge is a mass killer and the Ghost of Christmas Past is Irish 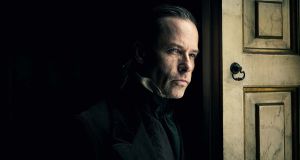 Guy Pearce as Ebenezer Scrooge in the Dickens classic, A Christmas Carol

Everybody knows the story of A Christmas Carol (BBC One, Sun, 9pm): It’s an indelible classic about one brave iconoclast, an irreligious captain of enterprise and profaner of mint sweets, whose vigorous work ethic and high expectations of those around him marks him out among the bleating, lock-step sentimentalists of mandatory Christmas cheer.

Yet, in a stinging critique of how the individual must be ground down by mass-mentality and conspicuous consumption, Charles Dickens has his free-thinker hounded, bullied and psychologically tortured by three vengeful spirits. Finally, tragically, he succumbs: shaken, hysterical and penny-tossing, he joins the throng of the merrily mind-washed. It’s basically Orwell’s 1984 in reverse. God bless us everyone!

Hey, if you’re going to “reimagine” A Christmas Carol, at least have some fun with it. In Steven Knight’s <sigh… > dark and gritty retelling of the Christmas staple, though, Dickens gets the Peaky Blinders treatment, but with neither the excitement nor the fun. Bah! Humdrum!

We begin in a snowy, grey graveyard, where an aggrieved urchin full of hatred with an even fuller bladder unleashes a gush of scorn upon the headstone of one Jacob Marley (Stephen Graham). The camera plunges into the ground, down inside the coffin with him, to find Marley conscious, perturbed and vociferously aggrieved by the trickle. “The inscription clearly reads, ‘Rest in Peace’,” he complains, blinking away the drops, before the screen thickens into a frost that bears the title. Chilling …

Cut to London, 1843, where streets crowd with extras yelling street hawker things with the accents and volume of a hundred exasperated John Bercows. Here Ebenezer Scrooge (Guy Pearce, severe, curmudgeonly, but still kind of hot), rations out four coal pieces for his sole employee Bob Cratchit (pained, class-conscious, but still kind of hot), while demonstrating various signs of conservatism, nihilism, autism, and depression. “How many ‘Merry Christmases’ are meant,” he muses, mostly to himself, “and how many are lies?”

Truth, though, spills from the mouths of Cratchit, another purgatorial blacksmith who begins Marley on his quest, and the Ghost of Christmas Past (Andy Serkis), who has decided to try out an Irish accent. This corresponds, to some degree, with a stridently postcolonial critique of Scrooge and Marley, no longer merely overlords of a counting house, but imperial industrialists whose workers have died in in vast numbers in factories from Manchester to Bombay to Honduras.

Thus is Scrooge given a scowling socio-economic historical context. And, with his compulsive counting, helpless verbalising and his nephew’s understanding that “he’s just in pain”, thus is he given a glum modern psychology. Filmed in profound darkness, thus is he also very hard to see past the glow of your Christmas tree lights. And, with all of these embellishments, thus is one of Dickens’s rare pithy works padded out to three hours across three episodes.

How padded? Well, by the end of the first instalment, Scrooge has not yet received the Ghost of Christmas Past, which is to say we’ve barely covered the novella’s first 26 pages worth of plot. In that time we have so elaborated Scrooge’s backstory as to make him, essentially, a corrupt mass murderer and the epitome of all the sins of British industrial capitalism.

Now, I don’t know how radical Knight intends to be, but it would take more than three visitations to push that kind of protagonist even close to redemption. So why bother? God damn him, everyone!

Bored at home? How about becoming a classic movie character?
7