Love Island: Laura Whitmore a favourite to take over as host 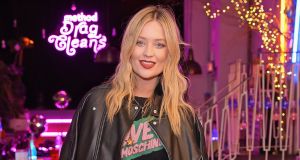 The Irish television presenter Laura Whitmore has been tipped as a favourite to replace Caroline Flack as host of the reality show Love Island.

Whitmore, who is from Bray, Co Wicklow, is also reportedly a favourite to cohost its spin-off series, Aftersun, with her boyfriend, Iain Stirling, the narrator of the dating show.

Also in the running to take over as Love Island host is its Irish former contestant Maura Higgins, one of the break-out stars of the 2019 series of the show. Higgins won fans for her flirtatious behaviour and frank conversations about sex. She has since landed a presenting job on the ITV show This Morning and will take part in Dancing on Ice next year.

Caroline Flack has confirmed this week she will not host the forthcoming winter series of Love Island following her assault charge.

The 40-year-old TV presenter was charged “following a private domestic incident” that allegedly involved her boyfriend, Lewis Burton. She then made an announcement on Instagram, saying: “Love Island has been my world for the last five years, it’s the best show on telly. In order to not detract attention from the upcoming series, I feel the best thing I can do is to stand down for series six. I want to wish the incredible team working on the show a fantastic series in Cape Town. ”

Flack also said: “There have been a significant number of media reports and allegations in regards to my personal life. While matters were not as have been reported, I am committed to co-operating with the appropriate authorities and I can’t comment further on these matters until the legal process is over.”

The presenter was charged on Friday with assault by beating, the Metropolitan Police said. She was arrested in Islington, in north London, after an incident at about 5.25am on Thursday following reports of a man being assaulted. Police said the man, whom they did not name, was not seriously injured. Flack’s boyfriend later spoke out in her defence, saying she has become the subject of a “witch hunt” after her arrest.

ITV said: “ITV has a long-standing relationship with Caroline and we understand and accept her decision. We will remain in contact with her over the coming months about future series of Love Island.” – PA, agencies

‘He’s so strapping and virile’: Patrick Stewart at 80, by Shatner, McKellen, Grammer and more
3

Dermot Kennedy: ‘I won’t let anyone take advantage of me or my music’
6

‘The beaches are open and people are having a wonderful time’: Why Jaws is still so scary
8

Go back to Dublin with yourself Dermot Bannon. We’re grand here in the dark
9