TV review: Ross Whittaker’s documentary is really the story of Lowry vs Lowry 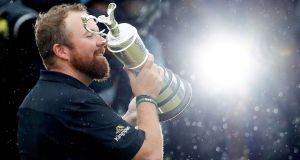 Shane Lowry – Open (RTÉ One, Monday, 9pm) is less a documentary than a souvenir: something made in commemoration of a fantastic accomplishment in sport, presented as a gift to keep the memory vivid, intended to bring warmth and cheer.

That accomplishment – which even those agnostic towards the sport can tell you – was to win the Open Championship last July, when it was held in Portrush, Co Antrim; just a stone’s throw (followed by a decent three wood, then maybe a lucky pitch), from Lowry’s birthplace in Clara, Co Offaly.

Anyone keen to wring a double meaning from the title of Ross Whittaker’s programme might expect Lowry, a man of gentle demeanour but not a big talker, to be more candid about himself, his sport, his philosophy and his emotions than usual. On one level, they may be disappointed: you don’t ever get the sense that Lowry enjoys talking about himself.

On another, though, they ought to respect the programme’s wider access – to Lowry’s family members, principally, including his parents, his siblings, his wife, and his grandmother, but also to his comrades and competitors in golf. The picture is better formed through composite views.

That may be a practical solution, but it also seems like a necessary corrective, because professional golf seems like a lonely undertaking. Lowry, independent in direction and obsessive in pursuit from an early age, takes to golf in spite of a family background in GAA. Rather than follow his father, Brendan, into the sport, his father, finally worn down, follows Shane, along with his younger brother, Alan, with whom competition is fierce.

“I actually thought at one stage there was something wrong with him,” remembers Lowry’s mother, Bridget, of his exclusive focus.

That is usually a fair assumption to make of prodigies, and the programme traces the upset Lowry caused, as an amateur, by winning the Irish Open in 2009, announcing his talent with a flourish.

His ascent continues near enough unimpeded until his first crack at a Major, at the US Open at Oakmont, in 2016, at which Lowry began his final round with a four-shot lead. He ended it tied for second place, with his confidence entirely shot. How much of a tragedy it is to come second, only winners will fully understand, but it’s startling to see Brendan abandon the interview now, overcome with emotion at the memory of his son’s devastation. “I was the only one with him,” says Brendan, before his voice cracks.

It’s a cliché to say that a sports star’s biggest opponent is themselves, but golfers seem especially vulnerable to the gusts of self doubt, self recrimination and self sabotage. “I’m not enjoying my golf at the moment,” Lowry says at the time of his slump, missing out on the Open for three straight years, “and my golf is not enjoying me.” (His mother, who seems to absorb her son’s stresses, prefers not to attend. “I actually hate the Open,” Bridget confesses, “because he never seems to play well.”)

Lowry’s transformative Golf Whisperer comes in the form of his caddy Brian ‘Bo’ Martin, a man so bearishly and beardily similar to him, that I suspect Lowry may actually have sent himself back from the future. “I don’t like when he’s right,” Lowry laughs of Bo’s sage club selection advice, which, if I’m right, is simply to maintain the rouse.

Lowry’s redemption hinges on overcoming the demons of Oakland: in Portrush, he again begins the final day with a four-shot lead over Tommy Fleetwood.

Like Rory McIlroy, Pádraig Harrington and all the golfers who contribute to the film, Fleetwood is magnanimous and generous. Whittaker doesn’t spare the details of the day: the weather, the bunker, the crisis-moment three-putting, the wobbles and spins of fate. But the story is Lowry vs Lowry, and Bo’s reading of the situation is as paradoxical as it is understandable: “I’ve this won,” he says of Lowry’s thinking, “the only thing that can happen is I can lose this.”

Instead, of course, Lowry prevails, and to watch the phalanxes of supporters, friends and family charging over the fairway behind him, cheering and chanting, is to see another refreshing antidote to the isolation of pro golf. That is the appeal of the programme: It’s his win, of course. But it’s everybody’s victory.