We invariably look in the wrong places for inappropriate content 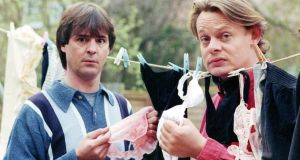 Thirty years ago, I worked at a theatre box office in London’s West End. Of an evening, staff from rival houses would gather for drinks in the “Italian End” of the Coach and Horses. This fellow was designing a board game. This lady was planning to escape to Australia. Many were doomed to tend Soho’s graveyard of ambition until the time came to enter a less metaphorical resting place.

One bloke from the Prince Edward Theatre (if I recall correctly) really was going somewhere. He was called Simon and he’d had a novel accepted by Penguin. The book came out to decent reviews and respectable sales, but Simon didn’t immediately become a media player. The later TV adaptation made that happen. The book was called Men Behaving Badly.

This all came back to me recently when the series landed on Netflix. Every now and then, that streaming service opens up such a window onto a distant era. The show is now often discussed as a typical manifestation of an unhealthy movement in pre-millennial popular culture.

Nothing about Simon Nye (for it was he) - a University of London graduate who translated books on Matisse and Wagner - suggested a herald of “Lad Culture”, but the series has been mentioned in all studies of the phenomenon. You remember. Loaded, Oasis, FHM, Lock, Stock and Two Smoking Barrels. All that pony and trap.

The cultural burp was so loud it drowned out all traces of the “New Man” against whom it was supposedly reacting. It’s as if The Council of Trent and all the other Counter-Reformation stuff had successfully written Martin Luther and his Ninety-five Theses out of history. As the Thatcher era receded, the notion was put about that the 1990s was going to be the caring decade.

These New Men would do the dusting, compose lullabies for their children and weave tampons for their lucky partners. Some of that may have happened. But nostalgic TV programmes on the era have more to do with the celebrations of Donkey Kong in Maxim than the growing popularity of Sylvia Plath among older male teenagers.

Too many male writers play unconvincing homage to feminism by having “sensible” women make fun of their partners’ brainless, sexist excesses

For all these reasons, one now approaches Men Behaving Badly with trepidation. We are supposed to be savouring Buffy the Vampire Slayer and My So Called Life. Those shows conjure up healthier spirits of the age. Right?

Well, the first thing to say is that Men Behaving Badly is less at home to the scolding-women trope than Judd Apatow’s work would be a decade and a bit later. Too many male writers play unconvincing homage to feminism by having “sensible” women make fun of their partners’ brainless, sexist excesses. Look. The women are smart. The men are idiots. The problem is that the female characters often come across as nagging bores with no sense of humour.

There is some of that in Men Behaving Badly. The series casts Martin Clunes as Gary, an office manager who lives first with Dermot (Harry Enfield, briefly) and then Tony (Neil Morrissey) beneath an uncertain young woman called Deborah (Leslie Ash throughout).

Dorothy (Caroline Quentin), Gary’s girlfriend, is certainly not backwards in pointing out the degradation that too many cans of Belgian pilsner have wrought, but her lines are consistently funny and the actress delivers them with incomparable venom. Indeed, the jousting between Quentin and Clunes is magnificent.

Of course, the series is pretending to disapprove of Gary’s uselessness while revelling in every seedy leer

They should teach their exchanges in the Timing Module at the National Institute of Comedy. Of course, the series is pretending to disapprove of Gary’s uselessness while revelling in every seedy leer. That’s how popular entertainment works. A veneer of moralising excuses the gratuitous violence, explicit sex and anarchic lawbreaking in all sorts of culture. The bad guys got punished at the end of Titus Andronicus.

What does shock now is the relationship between Tony and Deborah. Unrequited love (too often requited in later seasons) has long been a staple of situation comedy, but Tony’s behaviour in Men Behaving Badly is that of a criminal stalker. Let me be clearer. He’s not “a bit like” a criminal stalker. He doesn’t do the “sort of things” stalkers do. He is a criminal stalker.

He breaks into Deborah’s apartment and steals her underwear. He plants a listening device in her bedroom. He lurks sinisterly outside her door. Men Behaving Badly ended just two years short of the millennium, but this stuff now plays as uncomfortably as The Black and White Minstrel Show.

Nobody much noticed this at the time. If there is a moral here - beyond that Clunes and Quentin are awesome - it’s that we invariably look in the wrong places for inappropriate content. We have little idea what will seem unacceptable in a few short decades.

Much of the show is, nonetheless, still queasily funny. Simon escaped. Others are still at the Italian End.