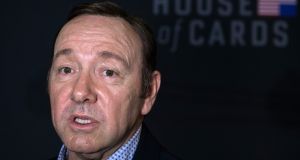 Kevin Spacey’s political thriller House of Cards is coming to an end after its upcoming sixth series.

However, it is thought that the decision to end the Netflix drama was made prior to Rapp’s claim about Spacey.

He said: “But if I did behave then as he describes, I owe him the sincerest apology for what would have been deeply inappropriate drunken behaviour.”

Spacey announced that he is living “as a gay man” in the same message.

Netflix and House of Cards producer Media Rights Capital have also released a joint statement about the allegations.

“In response to last night’s revelations, executives from both of our companies arrived in Baltimore this afternoon to meet with our cast and crew to ensure that they continue to feel safe and supported.

“As previously scheduled, Kevin Spacey is not working on set at this time.”

The final series of House of Cards is due to air in 2018.