In Home of the Year, three experts pass judgment on architecturally ambitious houses 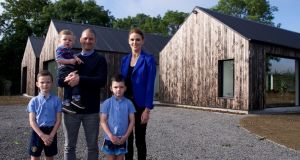 Freud once said of the Irish: “This is one race of people for whom psychoanalysis is of no use whatsoever”. He was essentially wrong, of course (oh and the quote is apocryphal). We do like to analyse one another. It’s just that we choose to do so via the medium of property-based light entertainment.

Irish TV is bad at lots of things. Comedy, soaps, police procedurals – we could go on (RTÉ often has). But golly it is prodigious at churning out early evening docudramas that revolve around ogling other people’s kitchens, master bedrooms and quirky stairwells. And thus, no sooner have we bid farewell to Dermot Bannon and His Wraparound Windows of Terror – marketed in some territories as Room To Improve: Dermot’s Home – and Dr Eva’s Great Escape, than it’s time to welcome back Home of the Year (RTÉ One).

The premise is simple and so very Irish. Each week a trio of experts scrutinise three architecturally ambitious houses and then pass judgment. It’s essentially a gamefied version of our great natural pastime of snooping on our friends and neighbours’ places of abode. At the end the judges rate the homes – just like the rest of us do in the car on the way home.

As is mandatory, the adjudicators present a study in contrasts. Hugh Wallace is an architect who tries to see the good in people, open-plan kitchens and walk-in wardrobes. If avuncular was a scent, he’d lather it on every morning.

Bringing a more holistic outlook is interior designer Deirdre Whelan. She attempts to imagine what a property might look like with people inside it. And the Simon Cowell role of resident baddy is filled, sort of, by another architect, Peter Crowley. He will say things such as “as I look around there are hats on walls, an encyclopaedia, tigers … very distracting”. (To be clear, he’s talking about a bedroom, not the next Jumanji movie.)

Their first stop-off is a house in Dublin which seems to have been carved from the inner workings of Lewis Carroll’s brain. There’s a library with a secret passageway behind a bookshelf. And an open plan kitchen with a multi-coloured SMEG fridge. Upstairs the kids’ bedroom has its own fireman’s pole. The judges are impressed, though we aren’t told the final score yet so as to build tension.

Then it’s off to Co Dublin and a busy new build. Crowley thinks it’s too dark; Wallace approvingly likens it to a “cubist’ painting.

But the best, by which we mean the scariest, is saved for last. In Co Meath they inspect a structure so minimalist it resembles a set from a Stanley Kubrick movie. The master bedroom looks like the command module from 2001: A Space Odyssey. “I feel like I’m on a retreat,” says Whelan, not entirely approvingly.

And then come the final tallies. The Dublin city residence is voted through to the final. Five more homes will join it in the weeks ahead.

The true winners, however, are we, the viewing public. For the next month and bit, we get to indulge in our favourite hobby of gawping at other people’s houses and passing silent judgment.

Don’t fight the feeling. It’s who we are.

Lewis Capaldi: ‘I’m not Justin Bieber or Ed Sheeran – I’m not getting chased down the street’
10