The special episode is a cut-price version of the Titanic movie, with added melodrama 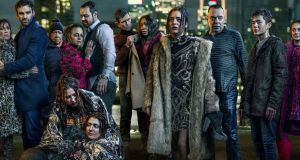 We have achieved Peak EastEnders

No other soap opera does bleak and nasty quite like EastEnders. If Coronation Street is the equivalent of a quiet pint with an old friend, its BBC rival is a thundering domestic that wakes half the neighbourhood.

So it is a given that the deafening show-stopper at the end of a week of episodes marking Albert Square’s 35th anniversary would be grimmer than a River Thames booze cruise in February.

The big reveal as the storyline reaches its agonising apex is that the character to go under with the sinking ship as a boat party goes fatally wrong is juvenile bully Dennis Rickman (Bleu Landau). But is this really a turn up?

The outlook was grim for “Denny” Rickman (or Denny Mitchell as he become when mother Sharon married Phil Mitchell) after Ian Beale locked the teen below deck. He did so as revenge for the hate campaign waged by the adolescent against Beale’s son Bobby, which led to Bobby being beaten up for converting to Islam.

Ian quickly realises he’s done a terrible thing as the boat begins taking on water. He tries to free Dennis by breaking the door with a fire extinguisher. Alas and inevitably, it’s too little too late.

However, EastEnders leaves us guessing as to the 13-year-old’s fate for as long as is plausible (longer arguably). Indeed for most of an instalment that unfolds like a Poundland version of James Cameron’s Titanic, it is heavily implied the victim will be either Linda Carter (Kellie Bright) or her pub landlord husband Mick (Danny Dyer).

Such a turn of events would have constituted a super-sized helping of melodramatic irony (and what is EastEnders about if not melodramatic irony?). After all, the disastrous cruise up the Thames Estuary was to celebrate the Queen Vic being crowned London’s finest boozer. To have one or both of the Carters literally perish as of result of their pub winning a prize would be so very EastEnders

It’s a bit of a cop-out by the writers, then, to instead bump off B-grader Denny. Yet his death is milked to the max. As Ian (Adam Woodyatt) tries to save him amidst rising waters, Denny’s mother Sharon is giving birth to the child conceived with bad-boy lover Keanu (Danny Walters).

Keanu, as it happens, is on board the boat too. Once rescued, he dashes straight to hospital to a) gaze into the adoring eyes of his infant child and b) tell the mother that her other son has perished in a horrific drowning. For now and ever after, we have here achieved Peak EastEnders.

Soaps are always extra-absurd when attempting to pull off a blockbuster finale. Remember the Coronation Street tram crash? This EastEnders show-stopper is less over the top than Corrie’s, which is to be expected given the muscle memory for communicating human suffering.

Still, fans might grumble it’s all slightly underwhelming. Dot Cotton (June Brown) has left Albert Square offscreen and won’t be back for a big farewell (and is not mentioned). And once the two Carters make it out it’s obvious none of the A-list characters are for the heave-ho.

Moreover, the episode shows its hand by playing up the juxtaposition between Sharon’s birth pains and Ian’s struggles to free Dennis. One side of this coin, it’s clear, is going to turn out to be a bad penny.

But of course EastEnders has always preferred tragedy over thrills. As the boat goes under and Dennis is bundled into an ambulance and off to the mortuary, there is the strangest sense of a TV institution cruising through familiar waters.