Netflix: 10 of the best new shows and films to watch in February

Look out for Locke & Key, Horse Girl, I Am Not Okay with This, and Queen Sono 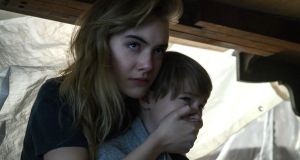 February 5th
The Pharmacist is the heartbreaking true story of Dan Schneider, who after his son’s death channels his grief into probing the opioid epidemic that plagues communities across the United States. He discovers a painful world of addiction where bogus pharmacists dole out prescriptions for OxyContin to healthy young people, creating a society of addicts. As he challenges big pharma and the anonymous decisionmakers who have flooded local towns and cities with this scourge, his crusade to prevent any other children from dying becomes a national talking point.

February 7th
Another addition to Netflix’s spooky-house genre, Locke & Key sees the three Locke siblings move back to their ancestral home after the murder of their father. Key House is a standard creepy manor filled with mysterious locked doors and magic keys that grant various powers. As they unearth more about the history of the house, and try to locate the all-important Omega key, the family become entrapped in a supernatural battle they may never return from. Based on the wildly popular horror-fantasy comic by Joe Hill (son of Stephen King), and more than a decade in development, the highly anticipated series has been created by Carlton Cuse (Bates Motel), Meredith Averill (The Haunting of Hill House) and Aron Eli Coleite (Daybreak). With work on season two already beginning, Netflix is clearly confident the show is worth the wait.

February 7th
Alison Brie’s screenwriting debut is the tale of Sarah (whom she plays), an isolated, delicate young woman who whiles away her days taking care of her beloved childhood pony and working at a local craft shop with her cheerful colleague Joan (Molly Shannon). What could be an average twee indie film about her lonely life develops into something more surreal and devastating as Sarah’s mental health deteriorates after she fixates on the life of her dead grandmother and sinks into a psychotic state. With Brie’s performance echoing Kristen Wiig’s dark turn in the bizarrely underrated Welcome to Me, Horse Girl is a surprising meditation on mental illness and the fear of succumbing to an idea of the self.

February 7th
The historian and activist Abdur-Rahman Muhammad delves into the murky events surrounding the assassination of Malcolm X and its subsequent investigation. Featuring interviews with witnesses to the murder and associates of the civil-rights leader, as well as unprecedented access to his declassified intelligence files, it’s a comprehensive look at the mystery of his death at the height of his popularity and why it has remained one of the United States’ greatest unsolved crimes.

To All the Boys – PS I Still Love You

February 12th
Arriving just in time for Valentine’s Day, this is the second instalment of the adorable romcom based on Jenny Han’s bestselling novels. Lara Jean (Lana Condor) may have bagged the high-school hottie Peter Kavinsky (Noah Centineo), but things are about to get more complicated for the couple. Familiar teen tropes of self-consciousness, social anxiety and awkwardness are woven into Lara Jean’s narrative as she realises what it’s like to date one of the most popular boys in school. Things become more complex when another recipient of Lara Jean’s old love letters, John Ambrose McClaren (Jordan Fisher), shakes things up, making his feelings for Lara Jean clear and leaving her confused about the nature of their relationship. The sweet original film became a word-of-mouth hit; this sequel will see if there is enough intrigue to sustain the would-be franchise. With the powerhouse charisma of its two main leads and its relatable, hopeful storylines, To All the Boys may be the love letter to romcoms that we sorely need.

Continuing the story of Miguel Ángel Félix Gallardo (Diego Luna), now the godfather of the Guadalajara drug cartel, Mexico’s first, as he tries to control his empire and deal with the treachery of his inner circle (as well as growing paranoia, heat from the authorities, and crooked politicians). Featuring a blizzard of cocaine, some upset Colombian gangsters, Shakespearean double-crossing and a chained-up tiger as a clunky visual metaphor, Narcos Mexico hurtles towards its inevitable catastrophic end.

I Am Not Okay with This

February 26th
This coming-of-age drama, based on the comic book by Charles Forsman and made by the director of the hit Channel 4 series The End of the F***ing World, tells the story of Sydney (Sophia Lillis), who is trying to navigate family dramas, pesky emotions and the hormone-driven terrain of teen life while trying to avoid the burgeoning superpowers that are beginning to erupt within her (and cause even more havoc). It’s a darkly comic offering that focuses on the horrors of those teenage wilderness years when not even superpowers can save you from the humdrum humiliation of adolescence.

Restaurants on the Edge

All the Bright Places

February 28th
This adaptation of Jennifer Niven’s bestselling young-adult novel features Elle Fanning as Violet Markey, a troubled young teen who meets Theodore Finch (Justice Smith) when they are both battling mental-health issues and contemplating suicide. The two strike up a close relationship as they deal with each other’s emotional scars and past tragedies. It’s a story of the exciting, beguiling nature of first love, the feeling of being understood and the small joy of shared experiences – but shot through with darkness and pain and the nagging sense that this fragile happiness could evaporate at any moment.

February 28th
A tough, no-nonsense, hard-drinking, hard-partying woman spy (think a less psychotic Villanelle) on a covert peacekeeping mission attempts to outrun her past demons and her debilitating PTSD in this thrilling crime drama. Starring the luminous Pearl Thusi, and written by the comedian Kagiso Lediga, Queen Sono is a sharp, exhilarating trip with the bitter flavour of Jessica Jones and the spirit and humour of Killing Eve. Netflix’s first foray into original African programming could just become a worldwide hit.

True History of the Kelly Gang: How an Irish bandit became Australian antihero
9