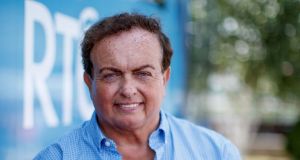 As a new decade begins, a spirit of resolve and hope for the future permeates the airwaves, if only because January’s arrival means not having to listen to any more obituary shows or end-of-year reviews for another 12 months. The last week of 2019 is peppered with pre-recorded round-ups such as Legacies with Joe Duffy (RTÉ Radio 1, Monday), in which the host pays respect to the lives of those people who have died during the year while trying not to forget anyone.

This combination of morbidity and rapidity doesn’t so much resemble eulogising as speed dating, as Duffy mentions the name of a recently deceased notable, asks his guests for a summation and moves on after 20 seconds. (In fairness, there are more substantial contributions for higher profile figures.) One becomes so inured to the ubiquity of such programmes that it comes as a pleasant surprise to discover that despite its rather ominous title, the Final Whistle (Newstalk, Monday) is a round-up of sporting highlights rather than a litany of the lately departed, presented with efficient good humour by John Duggan.

So, after all the obligatory looking back, New Year’s Day brings the prospect of fresh beginnings, in the form of Reasons To Be Cheerful (RTÉ Radio 1, Wednesday), in which Marty Morrissey and guests look ahead at the coming year. Lest the Ian Dury-derived name leave any doubt about the programme’s upbeat brief, Morrissey sounds as though he’s about to collapse into paroxysms of helpless mirth as he opens the show.

The jolly mood doesn’t survive the host’s opening question, however. Morrissey asks his panel if people are obsessed with personal happiness, only for Senator Marie-Louise O’Donnell to reply, “I prefer the state of melancholia”. Not to be outdone, comedian Bernard O’Shea states his belief that “happiness is a complete and utter myth”. It’s soon clear that the promised cheer may be more elusive than expected.

Within minutes, the discussion has taken a sombre turn, as the panellists discuss the homelessness crisis before turning to the always-calming issue of immigration. O’Donnell suggests a kind of pecking order in terms of necessity for immigrant visas, while fretting that even voicing such ideas risk her being seen as “prejudicial”. “It’s very hard to argue about this without it veering somewhere else,” she says about the topic. Sure enough, the atmosphere is decidedly more tense than is usual on a lighthearted seasonal gabfest.

Morrissey, who largely keeps his head beneath the parapet during the charged conversation, eventually attempts to cool the temperature. “Let’s chill out for a moment,” he says, inviting guests to name a favourite piece of music. Perhaps mindful of how quickly things escalated earlier, the host largely skirts around potential controversy by pitching a series of increasingly bizarre questions. “Do you have any thoughts on the British royal family?” he asks his bemused guests.

As for the host himself, he sounds more comfortable when the conversation turns to the familiar territory of sport

“When did you last have a good belly laugh?” he later inquires. “Is comedy a laughing matter or is it more serious?” he asks of O’Shea, whose own material on the day doesn’t obviously belong to the former category, largely consisting as it does of cracks about him appearing alongside Morrissey on various TV series.

As for the host himself, he sounds more comfortable when the conversation turns to the familiar territory of sport. Even here, however, there are contentious moments, as when fellow RTÉ sports broadcaster Damien O’Meara wonders whether sport brings people together any more than, say, book clubs. This might not be an especially transgressive idea, but seems like heresy when uttered in the company of Morrissey, for whom, like many others, the GAA is not so much sport as a way of life. Still, such moments raise a wry smile.

For a sports show that tries not to take itself too seriously, Second Captains (RTÉ Radio 1, Tuesday) also deals with intense themes when the team of Eoin McDevitt, Ken Early and Ciarán Murphy talk to Samantha Power, the Irish-born US diplomat and writer. Power is ostensibly competing for the show’s title of “Ireland’s greatest non-sportsperson sportsperson”, an honour currently held by Kenyan-born British politician Peter Hain, which suggests the hosts have even laxer criteria for nationality than the Ireland rugby team. All this is, of course, an excuse for McDevitt and co to indulge their trademark formula of irreverent attitude and deceptively intelligent conversation.

The latter trait is more in evidence in this New Year’s Eve edition. As McDevitt and Early quiz Power on the evolution of her political philosophy, it sounds less like a larky sports programme than a wonkish discussion on US foreign policy. Early in particular isn’t shy of putting in the odd hard tackle, comparing Power’s occasionally-favoured option of military intervention to an elephant trampling all around it.

It’s a stimulating and enjoyable listen, right down to the novel scoring system devised by Murphy, the show’s resident jester

Power is a regular guest on Irish radio, but it’s rare to hear her interviewed at such length, in an unusual milieu to boot. She comes across as a determined, serious-minded figure, but one shaped by the loss of her father when she was a teenager: “I’m still living in the shadow of that event.” Just as revealing is Power’s youthful dedication to track and field sports, where she first exhibited the traits that served her well in later life. “There was spirit and grit in my dedication to sport,” she says, which doubtless helped her bond with her old boss, Barack Obama, “a big sports guy”.

It’s a stimulating and enjoyable listen, right down to the novel scoring system devised by Murphy, the show’s resident jester. It’s uplifting too, with Power saying that the chaos of the Trump presidency has made her seek out positives: every day, she says, she emails a friend with three things that have made her grateful in life. It’s a time for hope, after all.

On the face of things, the historical and genetic links between Ireland and Iceland might not seem like the most poetic subject for a documentary, but the Lyric Feature: Mother’s Blood, Sister Songs (Lyric, Sunday) proves an absorbing experience.

Presented by composer Linda Buckley, the two-parter features contributions from academics, but filters its story about how Irish women were taken to the far northern island by Viking invaders through a musical lens, aided by a soundtrack of atmospheric Irish and Icelandic folk. Buckley also discovers that Iceland’s strong literary heritage has Celtic roots, as she hears “the status of poetry was much higher in Ireland than Germanic culture”. Far from being icy or cool, it’s a warmly evocative exploration of history, gender and culture.