Larry Gogan obituary: ‘He was the greatest ... Simple as that’ 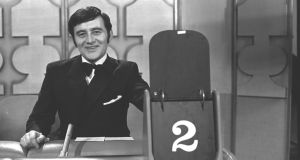 Larry Gogan, who has died in Dublin aged 85, was for nearly six decades the voice of pop radio in Ireland. In his career as a disc jockey for RTÉ Radio and, later, RTÉ 2FM, Gogan, dubbed “the man with the golden voice”, presented a series of popular shows that mixed chart singles with Irish music and old hits. His infectious enthusiasm and easy charm made him one of the country’s most beloved broadcasters.

The longevity of his career was astonishing, starting out in 1961, when RTÉ Radio broadcast for a few hours a day, and finishing in late 2019, hosting his show on a digital channel. In between, he worked as a radio and television presenter, before sealing the easygoing public persona for which he was best known on 2FM.

During his 40 years as a 2FM DJ he hosted segments that became much-loved radio institutions, the Golden Hour and the Just a Minute quiz. More importantly, the station gave him a platform to do what he loved best: play music and talk about it for a radio audience. “I prefer to be called a DJ rather a presenter,” he once said. The outpouring of sadness that greeted news of his death underlined the affection and admiration in which Gogan was held by people in Ireland.

One of eight children, he was born Lorcan Gogan and grew up on Maxwell Road in the Dublin suburb of Rathgar. His father, John, who owned a chain of newsagents and sweetmakers, died when Gogan was 10 years old, after which his mother, Mary, took over the family business. As a schoolboy at St Mary’s College in Rathmines, Gogan had wanted to become an actor, inspired by the example of his uncle Paddy, a theatre manager. As a teenager, he appeared in shows at the Gaiety and the Olympia theatres, sharing the stage with a young Gay Byrne at the latter venue.

His goals changed after listening to Radio Luxembourg, the only station where rock’n’roll could be heard by Irish audiences in the 1950s. Gogan loved the music of Elvis Presley, but he was really taken by the people playing the records. Resolving to become a DJ, he studied the technique of Radio Luxembourg presenters such as Alan Freeman, particularly his direct style.

He was determined in pursuing his new ambition. One of the regular customers at his family’s Fairview newsagent shop was Maura Fox, an advertising executive who worked on sponsored shows prevalent on what was then called Radio Éireann. After discovering this, Gogan “pestered” Fox for work, as he recalled it. His persistence paid off. Fox got him a part in a radio series called The District Nurse, sponsored by the toiletries company Cussons – it was a true soap opera, Gogan would later joke. Moreover, Fox put him in touch with Fred O’Donovan of Eamon Andrews Studios, which produced many sponsored shows, and his brother (and future 2FM boss) Bill O’Donovan, who encouraged Gogan to practise, prompting the would-be DJ to purchase a tape recorder to hone his craft.

He joined RTÉ in 1961, on the same day as Terry Wogan. Gogan’s innate broadcasting gifts, from his ease behind the microphone to his naturally warm voice, ensured that as the decade progressed, so did his career. As well as working on the ubiquitous sponsored shows – one of the few places where pop could be heard in Ireland – he took over from Gay Byrne as presenter of the radio show The 17 Club, dedicated to the country’s thriving showband scene.

Gogan further consolidated his popularity when he hosted the television show Picking the Pops, again taking over the role from Byrne. He went on to helm the Go 2 Show and other TV programmes. At a time when RTÉ was the only television station in the State, Gogan became a household name. “It was incredible; you couldn’t go anywhere,” he recalled.

While his fame grew, his home life kept him firmly anchored. When on a family business errand as a young man, he had met Florrie Duffy, whose father was also a newsagent. They became sweethearts, eventually marrying in 1963. They would go on to have five children, Gerard, Orla, David, Gráinne and Sinéad. (David followed his father into the music business, becoming vice-president of EMI Ireland.)

Gogan’s family commitments were one of the reasons he never left Ireland, despite his talents’ attracting offers from abroad. Both Radio Luxembourg and the BBC approached him at different stages. Gogan recalled that Florrie wasn’t keen on leaving Ireland for Luxembourg; the BBC offer was deemed too uncertain with a young family to support.

During the 1970s, his professional focus returned to radio, with his weekly show Discs-a-Gogan a rare bright spot for rock and pop in a moribund RTÉ Radio environment. Keenly aware that the national broadcaster was losing young listeners to the pirate stations mushrooming around the country, Gogan joined others, such as the late Vincent Hanley, in urging Montrose management to set up a dedicated pop channel. So it was on May 31st, 1979, that RTÉ Radio 2 was launched, with Gogan fittingly playing the first song, Like Clockwork, by the Boomtown Rats.

The new station, later rebranded 2FM, would become Gogan’s most enduring home. Gogan was a veteran in an operation largely staffed by young DJs recruited from pirate radio, such as Marty Whelan and Gerry Ryan. But while Whelan and Ryan took a chattier, more irreverent approach, Gogan made his new daytime show his own with his passion for music.

He was also a consistent champion of upcoming Irish acts, starting with U2

Though current chart hits were central to his show, Gogan was always listening out for new music. A freelancer rather than a staff member at RTÉ thoughout his career, as well as his own producer in later years, he picked his own tunes, rather than relying on station playlists. He was also a consistent champion of upcoming Irish acts, starting with U2 in their earliest days. (U2 were his favourite band, while the band’s drummer, Larry Mullen, became a fast friend.) He wasn’t alone in this: his more cultish colleague Dave Fanning pushed new Irish sounds on his late night show. But, crucially, Gogan introduced these new acts to a much broader daytime listenership.

Just as important to Gogan’s success was his willingness to play music of every type and era. His daily selection of classic hits and overlooked oldies, entitled the Golden Hour, became a crucial part of his show. Far from wallowing in nostalgia, however, Gogan introduced the songs he played with a freshness that belied their – and his – vintage.

Another much-loved segment was the Just A Minute quiz, which Gogan and his then-producer Cathal McCabe created for his first 2FM show. It soon attained cult status, largely due to the bizarre answers that contestants could give, such as the Great Wall being located in Crumlin or the Taj Mahal opposite the Dental Hospital. (Both landmarks shared their names with Dublin food establishments.) The myths about the quiz were just as potent. Gogan regularly had to debunk the tale that one person had completed the phrase “happy as . . .” with a line about porcine manure.

But the key element was Gogan’s upbeat yet unassuming personality. Unsuccessful quiz contestants were never mocked, but sent off with the comforting catchphrase, “they didn’t suit you today”. His relaxed yet gracious manner was aided by his warm delivery. “His voice was as smooth as a billiard ball,” according to Dave Fanning. Gogan wore his immense musical knowledge lightly, but his main concern was to bring music to his public. He embraced the term disc jockey, saying his job was “to jock the disc”, even as music formats turned digital.

His on-air friendliness was mirrored outside the studio. “Over the years in Radio Centre, nobody was loved as much as Larry Gogan,” according to Dave Fanning. “He was genuine, self-deprecating to a fault, always a smile.”

It was a slot he filled with typical gusto until January 2019, when his retirement from 2FM was announced

Gogan projected an ageless persona when broadcasting, always remaining elusive about his real age. But he faced health challenges and personal loss as the years went by. He underwent major heart surgery in December 2001, only for his beloved wife Florrie, the woman he called his “rock”, to die in January 2002 from breast cancer. In later years, he suffered from kidney ailments which necessitated dialysis, while arthritis limited his mobility.

Meanwhile, having kept his weekday show over many line-up changes at 2FM down the years, the arrival of new station boss Dan Healy marked Gogan’s move to the weekend. It was a slot he filled with typical gusto until January 2019, when his retirement from 2FM was announced. The esteem in which he was held was evident in the tributes that flowed after he left the station. Even then Gogan wasn’t finished. He continued to host a show on digital oldies station RTÉ Gold, working up until a couple of months before his death.

Gogan’s easy manner belied his huge influence. President Michael D Higgins, a fellow music fan, summed it up well in his tribute when he said that Gogan “made an indelible impact on Irish music, having promoted both up-and-coming and more established Irish musicians and sharing his infectious enthusiasm and passion for pop and rock music of all kinds.” Dave Fanning was more succinct: “He really was the greatest, it’s as simple as that.”

Gogan is survived by his children, Gerard, Orla, David, Gráinne and Sinéad, and by his 12 grandchildren.

Don’t Be Evil: The Case Against Big Tech: Important book on corporate giants
9