Amazon’s Lord of the Rings will have plenty of elves but will there be any hobbits? 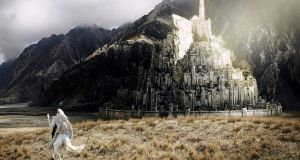 The series is set in the “second age” of Middle-Earth, long before the events in the JRR Tolkien classic, which spawned three hit films. File photograph

So, what news from Middle-Earth? Unless you’ve been living in a dank Gollum-cave deep beneath the Misty Mountains, you’ll have heard about Amazon’s hugely anticipated megabudget TV series based on The Lord of the Rings.

Details of this latest foray into the world of elves, hobbits and orcs have been sketchy, but it’s set in the “second age” of Middle-Earth, long before the events in the JRR Tolkien classic, which spawned three hit films. Tolkien fans – a rather excitable lot – have been quivering with anticipation over this “prequel”, wondering if any of the familiar characters and locations will return, and casting their gimlet eye over plot details in search of deviations from the sacred Tolkein canon.

Production on the first series has been completed, on location in New Zealand (where else?), but we still don’t have a release date, and we know precious little about the storyline. On Wednesday, however, fans were thrown a few crumbs when Amazon released a synopsis of the series: “This epic drama is set thousands of years before the events of JRR Tolkien’s The Hobbit and The Lord of the Rings, and will take viewers back to an era in which great powers were forged, kingdoms rose to glory and fell to ruin, unlikely heroes were tested, hope hung by the finest of threads, and the greatest villain that ever flowed from Tolkien’s pen threatened to cover all the world in darkness.”

There’s also an “intimacy” co-ordinator, suggesting that this iteration of LOTR might veer a little closer to Game of Thrones-type rumpy pumpy

The journey will take viewers “from the darkest depths of the Misty Mountains, to the majestic forests of the elf-capital of Lindon, to the breathtaking island kingdom of Númenor” and will feature characters “both familiar and new” who will “confront the long-feared re-emergence of evil to Middle-Earth”.

You can take it there’ll be lots of elves, since this was pretty much their time, but will there be any hobbits, and will we revisit the bucolic idyll that is the Shire? No mention of halflings yet, but as Lindon lies just west of the Shire, chances are we’ll be passing by Hobbiton somewhere along the way.

So which characters are we likely to see when the first series is released, most likely later this year? As the storyline goes back a few thousand years, we can rule out most of the LOTR characters, but we will see the return of the elf-queen Galadriel, and Elrond the half-elf, both of whom were knocking around during the second age. Cate Blanchett and Hugo Weaving won’t be reprising those roles, however, with a young Galadriel being played by Morfydd Clark. And Sauron himself will also return – and not just as a giant, fiery eye.

There are also a couple of interesting names among the cast, including the comedian and actor Lenny Henry and the Scottish actor and film-maker Peter Mullan.

Already, some fans have complained about the “diversity” of the cast list

Amazon bought the television rights to the Lord of the Rings for a whopping $250 million (€205 million) in 2017, and the five-series epic is reported to be costing up to $1 billion. The network has wisely decided not to replicate the main story, already told in Peter Jackson’s blockbuster trilogy. Instead, Amazon has drawn from Tolkein’s epic prequel, The Silmarillion, for much of its material, thus avoiding comparisons with Jackson’s trilogy, and also minimising the prospect of pedantic fans pointing out inaccuracies, as few of them are likely to have waded through these unwieldy annals.

The Tolkein scholar Tom Shippey, one of the world’s authorities on the works of JRR, will be on board to ensure that the series keeps in line with the Tolkein canon. There’s also an “intimacy” co-ordinator, suggesting that this iteration of LOTR might veer a little closer to Game of Thrones-type rumpy pumpy, so this one may not be suitable for very small elves.

Already, though, some fans have complained about the “diversity” of the cast list, claiming that including actors of colour somehow betrays Tolkein’s vision of a mostly white Middle-Earth. You could say Middle-Earth fits many folks’ ideals of “middle England”, but let’s ignore this underlying rumble of racism. For fans of epic swords and sorcery of all shades, the prospect of five series of epic LOTR action can only be a good one. Having sat through the extended trilogy for the umpteenth time with my kids over Christmas, though, I might just pass on this return to Middle-Earth.