Is that Ivan Yates or an ostrich with its head in the sand? 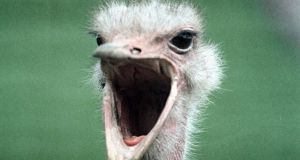 “If the dodo goes, maybe we’ll get a better-looking ostrich”: Ivan Yates’s attitude comes across as indifferent rather than inquiring. Photograph: Michael Mac Sweeney/Provision

It’s been one of those harum-scarum, and we’re not just talking about the ghouls Halloween. Far scarier than any horror movie you may have watched is the news that 60 per cent of wild animals worldwide have beenwiped out since 1970, according to a World Wildlife Federation report. But far from being worried by this decline, Ivan Yates sounds jocular when he discusses the issue on the Hard Shoulder (Newstalk, weekdays) with environmentalists Eanna Ní Lamha and Kieran Flood.

Rather than viewing this information as a harbinger of catastrophe, Yates wonders if it isn’t just “alarmist nonsense”, musing whether people would care “if a few auld snails were missing?” Alpha male irreverence is a key part of Yates’s shtick, of course, but the entire conversation is conducted in this spirit. The presenter variously suggests it’s a “third-world problem” and puts the changes down to a singular interpretation of evolution: “If the dodo goes, maybe we’ll get a better-looking ostrich.”

Yates’s attitude comes across as indifferent rather than inquiring, undermining his image as a maverick heavyweight. Like an ostrich, he prefers to put his head in the sand. But while we can comfort ourselves with little fictions, it won’t change the harsh facts.

Indeed, never let the facts get in the way of a good story. Depending on whether one is a natural raconteur or an impartial witness, it’s a phrase that can be either high praise or damning indictment. (It can also be a political credo if you’re the current US president, but that’s for another day.) Determining the actual facts of a story is often easier said than done, however, particularly with the passage of time. More to the point, it can seem like a pedantic exercise unless you’re a barrister or a historian.

Such nit-picking certainly doesn’t seem like a promising basis for a radio play. So kudos is due to the makers of the Drama on One: James’s Story (RTÉ Radio 1, Sunday), which deconstructs a personal anecdote with a rigour that would shame a French post-structuralist philosopher, but still manages to be absorbing piece of aural theatre. Written and directed by American-born author David Zane Mairowitz, the play revolves around a 1968 visit to Co Kerry by real-life English protagonist James Rooke, or more precisely his recollection of a couple of incidents that occurred during his time there.

On the face of it, this sounds about as inviting as a tome by aforementioned Gallic thinker. Luckily, the man dissecting James’s account is the Story Poacher, an enigmatic narrator played with typical deadpan charisma by Stephen Rea, who lends a wryly playful quality to proceedings. This is just as well, because the material itself is thin. Rooke recalls his encounter with an old farmer (Páidí Mharthain Mac Gearailt), who claims to have killed an Englishman (Richard Smallwood) during the War of Independence. He then goes to a Dingle pub where the otherwise taciturn locals sing and dance in apparently spontaneous fashion. End of story.

Despite their apparent inconsequentiality, these events are subjected to intense scrutiny. Rea’s character conjures up alternative scenarios for each incident and pokes fun at the English interloper’s perspectives: “Oh, for f**k’s sake, folk memory,” he scoffs at James’s take on the pub singing. More concretely, local historians poke inconsistencies in the anecdotes.

It’s a perilously slight foundation on which to build a drama, as Rea’s character self-consciously admits: “Aren’t you just paring the raw fingernails of James’s story?” But the result is greater than the sum of its parts. Drawing together anecdote, music and history, it undercuts James’s tale, yet ends up as a mercurial portrait of both a person and a place. Neither fact nor fiction, it ends up in a space redolent of the late German writer WG Sebald, if not of quite the same quality. Underneath it all runs the idea that a story’s resonance can remain undimmed even in the face of contrary evidence, a grimly familiar theme in our post-factual age.

The manner in which stories are told is at the heart of the Documentary on Newstalk: Propped Up(Newstalk, Sunday & Monday). Produced and narrated by Pavel Barter, the programme uncovers the history of three films made in Ireland by focusing on a crucial prop from each movie. It’s a novel approach, leading to an eclectic selection of films. So the listener hears about a schoolhouse specially built in Dingle for David Lean’s epic Ryan’s Daughter, the eponymous mobile chipper in Stephen Frears’s celluloid adaptation of Roddy Doyle’s The Van and a monster mask used in obscure horror flick Rawhead Rex.

We learn that the hatch in Roddy Doyle’s chip van was used to frame the actors on camera, even having the same ratio as widescreen: designer Mark Geraghty called this “Chip-O-Vision”

The documentary strives to avoid becoming a compendium of geeky trivia. Bookended by narrative device in which Barter seeks advice from a fictional video shop owner, it looks not only at the film productions but also the wider contexts in which they were made, such as the rural Kerry of the 1960s (again) or the grimy Dublin of the 1990s. Even so, it’s the small scale detail rather than the big picture that works best.

Hence we learn how Irish-speaking pupils in Dingle had to learn their tables as Béarla for the schoolhouse scenes, and how the hatch in Doyle’s chip van was used to frame the actors on camera, even having the same ratio as widescreen: designer Mark Geraghty called this “Chip-O-Vision”.

Most entertaining is the segment on Rawhead Rex, a low-budget film which aimed to install fear but mainly prompted ridicule. As imagined by screenwriter Clive Barker, the monster was supposed to resemble a befanged phallus. Instead, it ended looking like “Miss Piggy in combats”. Needless to say, the movie has gone on to attain cult status.

These vignettes are relayed with affable enthusiasm by Barter, whose knowledge of and affection for his subject is palpable, right down to the gleefully daft twist in the tail. All in all, an enjoyable storehouse of anecdotes: props where props are due.

Radio Moment of the Week: Dunne plays it cool

On Tuesday, as Tom Dunne stands in for Sean Moncrieff (Newstalk, weekdays), he notes that it’s a much-loved TV star’s birthday. “On this day in 1945, the Fonz was born,” says Dunne, referring to the leather-jacketed character in 1970s sitcom Happy Days. “In every show he’s been in, he has a surname that’s very hard to pronounce,” Dunne adds, citing subsequent roles such as Saperstein and Mittleman. Underlining the point, Dunne mispronounces the name of the iconic Happy Days character as “Arthur ‘Fonzie’ Fonzerella”. (As any child of the era knows, it was Fonzerelli.) More pertinently, Dunne neglects to pronounce or even mention the name of the actor who played all these parts, Henry Winkler. But Dunne gets away with it: like the Fonz, he stays cool.

Steve Coogan: ‘Come Out, Ye Black and Tans is two fingers to the British’
8

Blood: A disappointing journey into the Irish psychosphere
9