The first teaser for the final season of House of Cards has been released, the last series of the hit Netflix show will not feature Kevin Spacey who had starred in the previous five seasons. Video: Netflix 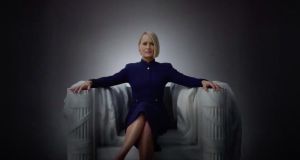 The secret weapon of the political drama now takes centre stage in the final season of House of Cards as Robin Wright’s formidable Claire Underwood usurps her husband Frank, pushing the show to its Shakespearean limits. Now ensconced in the womb of the White House, Claire sinks further into self-created isolation, without allies and proving unpopular with the public she strives to become even more entrenched in her solitude, furthering the paranoia of the already anxious administration.

Although the trajectory of the final series has been thrown off course due to the firing of Kevin Spacey, it is a chance for Wright to be given the space to expand and reveal more nuances to the character of Claire Underwood without Spacey’s somewhat off-putting, excessive monologues, which mostly amounted to winky-faced scenery-chewing.

As expected, Frank’s death haunts the series with his spectre hanging over Claire’s presidency, smothering her ambition, bringing forgotten characters out of the shadows who are eager to take a slice of the political pie they now feel they are owed.

Not only has Netflix acquired Orson Welles’s experimental final film, The Other Side of the Wind (released on the same day), it has also snatched up the compelling behind-the-scenes documentary that accompanies the “lost” feature. Showing Welles in the final years of his life as he attempts to make a comeback, it’s a fascinating look at the director’s state of mind at a time when he was revered but also seen as a relic of the past rather than the vital force he once was.

Holed up in European hotels and later in Peter Bogdanovich’s mansion, the artist attempts to recapture his former glory while trying to dismantle his mythical reputation and create something truly original.

Filmmaker Morgan Neville (20 Feet From Stardom) lovingly pieces together footage, interviews and adds his own narrative twists to the story with visual nods to the redoubtable director himself. They’ll Love Me When I’m Dead is a tricksy tribute that aligns with the shadowy image of the unknowable Welles.

To quote the wise words of Alyssa Edwards, “the wig of a drag queen is like the cape of a superhero, ” Super Drags, the new Netflix animation, takes this maxim literally. Featuring the voice talents of RuPaul’s Drag Race alumni Ginger Minj, Shangela and Willam as a trio of queens who team up, using their unique powers to “slay”’ those shady forces of evil who are preventing the world from being a more fabulous place.

It’s a sweary Powerpuff Girls, it’s an even more camp version of Johnny Bravo, a dragged-up Charlie’s Angels stuffed full of ribald visuals, salty clapbacks and dubious double entendres. These modern superhero divas are ready to work those capes, beat some face and lip-synch to save humanity, all while looking sickening of course.

The first season of this anthology series was a surprise hit for the streaming service with Jessica Biel earning praise for her turn as a stabby housewife whose recovered memories are the key to solving her crime. It may have descended into an exploitation soft-porn farce, (think True Detective produced by Playboy) but the series ended up featuring at the Emmys and Golden Globes and was quickly renewed.

The second season sees Bill Pullman’s detective Harry Ambrose called back to his hometown to investigate a shocking crime where an eleven year old boy is accused of murdering his parents. Harry is forced to confront the darkness at his doorstep fighting against the town’s more macabre residents who want to prevent these traumatic secrets from being revealed. The Sinner’s flagrant sensationalism may be hard to stomach for some but with a strong supporting cast including Carrie Coon (Fargo) and Tracy Letts (Homeland), series two sees it somewhat maturing from the adolescent preoccupations of its previous incarnation.

Not only does Star Trek’s Chris Pine tackle the notoriously difficult Scottish brogue but he has also caused a cinematic commotion with his full blooded and (briefly) full frontal performance as Robert the Bruce. Such is the scarcity of the male form on screen, that this Braveheart-style tale of medieval machismo has been somewhat overshadowed by a peek at Pine’s anatomy.

Director David Mackenzie (Hell or High Water) continues his line in ultra-masculine storytelling with this historical epic where Bruce and his army of willing subjects attempt to defend their land, freedom and sovereignty from the threat of the English.

When not bathing in lakes, or giving rabble-rousing, inspirational speeches, Pine’s Robert the Bruce is no brute, he’s a sensitive soul full of respect for his wife Elizabeth (Florence Pugh) in an early scene they do not consummate their marriage due to her fears, giving the clear message that if a hairy warrior in feudal times can ask for consent it should be no problem for modern men. These contemporary flourishes make the usual shouty, sword-fighting, swashbuckling story a tad less cliche even if the depiction of the gruff but fair Bruce amounts to nothing more than the stock Hollywood heroics of everyone from Robin Hood to Russell Crowe’s Maximus Meridius.

Westside is Netflix’s latest bid to capture the reality TV. market from the clutches (or should that be klutches?) of the Kardashian built empire of the E! Network. It’s an intriguing “unscripted series” that follows a group of wannabe singers and their struggles to make it in Hollywood. Cleverly combining successful elements from all over the pop culture map –- the professional travails of La La Land, the perky, musical theatre enthusiasm of Glee and the stylised cinematography and addictive drama of The Hills, it looks like they could be on to a surefire hit. The only caveat that may prevent Westside from turning into the latest bingeworthy sensation may be the bizarre tendency the show’s genetically blessed starlets have for liberally bursting into song as they clean the toilet or order a Big Mac. One can only hope that this will inspire someone to transform the iconic Lauren and Heidi fight into an auto-tuned duet.

This collection of cowboy vignettes from the Coen Brothers was supposed to be their first foray into episodic television but has instead been stitched together as a film which will have a limited theatrical release. Concentrating on the misfortunes and misadventures of various misfits, rogues and dust bowl charmers attempting to cheat death or make a fast buck, the film, like O Brother Where Art Thou?, fits snugly into the Coens's wryly observed, Faulkneresque vision of Depression era America. With turns from James Franco, Liam Neeson, Zoe Kazan, Brendan Gleeson and Tom Waits, it’s a star-studded affair that could push Netflix further into the all important Academy Awards race.

Netflix’s much vaunted, drug-trafficking drama, Narcos, finally gets its highly anticipated origin story. Narcos: Mexico takes the series back to its beginnings, exploring the creation of the Guadalajara cartel and its foundations in the modern drug war as the independent growers and dealers fight for supremacy.

Chuck Lorre (The Big Bang Theory) brings his sitcom about the growing pains of aging to Netflix. Starring Michael Douglas and Alan Arkin it’s the story of two friends, one a veteran Hollywood star, the other his long suffering agent navigating their twilight years in the youth obsessed, unforgiving terrain of modern Los Angeles.

The eight episode series is  a departure for Lorre who is the current king of primetime, not only is the show more of a filmic affair using a single camera rather than the multi-camera studio set up, it’s also devoid of the ever-present audience reaction, instead it’s imbued with silence as the more realistic humour is seasoned with a subtle sense of melancholy.

That time of year is rapidly approaching, the time to fully switch your brain off and let the rot set in. Last year, A Christmas Prince became a strange word-of-mouth sensation for Netflix which even used one subscriber’s repeat viewing of the film as a negging social media ad. Its cosy cornball delights is befitting of the season of schmaltz and sentimentality – the plot is entirely ludicrous and the acting as comical and creaky as any school nativity but there is something about its fluffy frivolity that acts as a comfort blanket for the brain. This newest instalment centres on Amber and Prince Richard’s royal wedding. The cheap Christmas cracker version of Harry and Meghan will no doubt reign supreme this festive season.

Lockdown mid-term guide: Get over the midweek hump