Podcast of the Week: Death in the Afternoon

Featuring stories about the end of life, Death in the Afternoon makes a remarkably troubling topic somehow light. Not too light. Just human 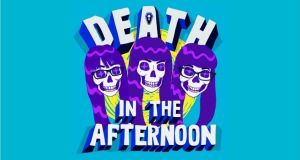 Death in the Afternoon: fascinating listen about how people cope, or don’t cope, with death

Death In The Afternoon

Because of the almost limitless scope of the form, there are podcasts about every subject one could imagine. I try to keep coverage varied between fiction and science, food and culture – leaning away from politics and sport, because those subjects govern mainstream radio. I’ve listened to podcasts about art heists and Oprah, about deep space and the far future – about food, addiction and climate change.

The only podcast I’ve listened to about death so far is a work of fiction, Wooden Overcoats. Death in the Afternoon is my first foray into listening to a conversation and stories about the end of life – and it makes a remarkably troubling topic somehow light. Not too light. Just human.

The three hosts are as fascinating as the show itself: Caitlin Doughty is a mortician and funeral-home director, Sarah Chavez was raised witnessing fake-deaths on soundstages in Hollywood, and Louise Hung is the video editor of Ask A Mortician. Together, they run The Order of The Good Death, which this podcast is a production of – and they are dedicated to having conversations about death and grief and how strange it can be. The tone of the podcast is buoyant without being flippant – respectful without being stilted, as they step confidently into strange and difficult subject matter from minute one.

The first case examined is one of an elderly woman who keeps her deceased husband and sister’s corpses in her home, and initially concerns that things might descend into a slightly perverse mocking of what people do when they’re grieving prove unfounded. Rather than peering, tabloid style, at the horror of an older lady keeping dead bodies in her living room, they discuss stunted grief, how one would keep a corpse, how one would exhume a corpse from a grave, with compassion and empathy.

In another segment, Chavez relates a story from Hollywood history with a clarity and narrative precision reminiscent of You Must Remember This. The final section discusses the practicality of living with corpses, and discusses the case of the “oldest man in Tokyo”. Each segment links in to one another: the structure is really considered.

This podcast isn’t just about grief and the philosophy of the end of life, or strange stories from across the world about weird death. It’s a compassionate, fascinating listen about how people cope, or don’t cope, an illuminating study of how people live around or with death, and the humanity behind them, even when things get very strange.