In Sunday night’s episode, No Good Read Goes Unpunished, The Simpsons creators acknowledged the racial stereotype controversy over Indian character Apu, but their response has not gone down well. Video: The Simpsons/FOX 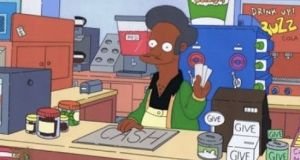 The Simpsons character Apu in the Kwik-E-Mart. Photograph: Fox

The Simpsons is not going to include Indian character Apu in future episodes after a backlash against alleged racial stereotyping, a producer has said.

Kwik-E-Mart owner Apu Nahasapeemapetilon, who been a part of the show since the first season, will be written out of the TV cartoon series to “avoid controversy”, Adi Shankar said.

“I got some disheartening news back, that I’ve verified from multiple sources now: They’re going to drop the Apu character altogether,” he told IndieWire.

“They aren’t going to make a big deal out of it, or anything like that, but they’ll drop him altogether just to avoid the controversy.”

Hank Azaria, the actor who voices Apu, has previously said that he is willing to “step aside” following criticism over the character.

The controversy mainly arises from a documentary last year from comedian Hari Kondabolu, The Problem With Apu, that saw him interview figures from the world of entertainment including Aziz Ansari, Whoopi Goldberg and Kal Penn to look into the problematic nature of the iconic shop owner.

The Simpsons, which first aired in 1989, is currently producing its 30th season.