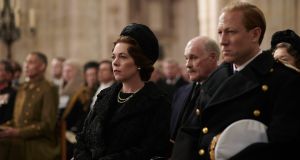 Olivia Colman as Queen Elizabeth II and Tobias Menzies as The Duke of Edinburgh, appearing in the third season of Netflix show, The Crown. Photograph: Des Willie/Netflix/PA Wire

Olivia Colman was recently accused of possessing a “left wing” face by a British newspaper columnist. So it is a relief to report that she has moved on from the firebrand Marxism of Broadchurch and Peep Show and glides snugly into the part of Elizabeth II in season three of The Crown (Netflix).

The changes are ringing out at Buckingham Palace as Peter Morgan’s chronicling of the life, times and private frustrations of the British Monarchy returns. Colman replaces Claire Foy as the Queen, Outlander’s Tobias Menzies is in for Matt Smith as Prince Philip and glamorous Helena Bonham Carter takes up the mantle from Vanessa Kirby as lost party girl Princess Margaret.

Colman is the most successful of the newcomers. She locates early on the stolid dutifulness that is one of the defining qualities of the real Elizabeth. Foy, by contrast, always had something of a movie star playing dress-up about her.

Menzies and Bonham Carter fare less well. The former captures the body language and diction of Philip. But he struggles to bring us the Duke of Edinburgh’s inner turmoil (as Smith did so effectively). And Bonham Carter’s Margaret lacks the subtlety and sense of tragedy Kirby conjured: she’s just a rude bohemian jealous of her big sister.

Because of the challenges of bedding in the new actors Morgan is otherwise determined to stick as closely to The Crown’s formula as possible. It’s 1964 and the Queen is knocking on the door of middle age (“There it is. One must make the best of it”). Britain meanwhile is entering a period of change,too, though The Crown is selective as to how it reflects this on screen.

The Swinging Sixties are ignored, as is England’s World Cup victory, the rise of the Beatles, the Nixon Presidency and - just a small detail - the outbreak of the Northern Ireland Troubles.

Morgan instead has built the 10 episodes around a job lot of headline events seemingly selected on the basis of providing learning opportunities for Elizabeth and the gang. So the 1966 Aberfan slag heap disaster is a vehicle for her overcome her reluctance to show emotion in public. The Moon landing and a visit to Buckingham Palace by the Apollo astronauts draw into focus Philip’s mid-life malaise. And so on.

It looks gorgeous, as you could expect of the $130 million budget. And there are solid second-string performances by Jason Watkins as Labour prime minster Harold Wilson and Charles Dance as Lord Mountbatten (essentially Tywin Lannister in a suit).

Still, the suspicion that Morgan is repeating himself is hard to avoid. Tensions between the sensible Elizabeth and the outrageous Margaret have been explored previously- why bring them up again? And if you’ve been paying attention to Smith’s Philip it will come as little surprise to discover that the older Duke feels unduly constrained by his obligations as husband to the regent.

The Crown discovers its stride in the last several episodes as the Sixties end and we enter the Seventies and the dawn of that most hallowed of Monarchal institutions: the right royal bonkbuster. An affair between Margaret and a young toff brings some much needed spice while foreshadowing the present day hounding by the press of Harry and Meghan. And Charles’s stuttering romance with Camilla Shand sets the table for the arrival of Diana in season four.

But that’s the problem. It is hard to avoid the sense that the show is clearing its throat after the departure of Foy and the gang and killing time before Diana and Margaret Thatcher (to be played by Gillian Anderson) make their grand entrances. Just like the Queen herself The Crown season three is expensively put together yet ever so slightly dull and predictable.