Helen Mirren: ‘Catherine the Great was a serial monogamist’

The granddaughter of Russian immigrants dazzles as the 18th-century empress 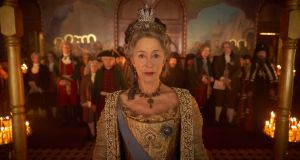 Helen Mirren in Catherine the Great. ‘For me, to show older women as powerful, active, courageous, smart is important.’ Photograph: Sky

Helen Mirren couldn’t look any more Helen Mirren when I meet her. Her light hair is swept back, not one strand out of place. She wears a buttoned-up floral dress, cinched at the waist, and the odd bit of tasteful jewellery. And she has kindly eyes, which make her more approachable than I’d imagined, given her status as one of the highest-standing actors in the industry. But certainly, there’s something undeniably regal about her demeanour, which might explain the full works of awards – we’re talking Tony, Olivier, Academy, Golden Globe, Emmy, SAG and Bafta – for her various portrayals of Elizabeth I and Elizabeth II. While Netflix’s The Crown picks up the baton of dramatising the British monarchy, Mirren has set her sights eastwards, to Russia.

A few years ago, she happened to mention in an interview that she’d like to play Catherine the Great, the German-born aristocrat who married Russia’s heir, and later usurped him to rule for an improbable 34 years, during which she expanded Russian’s dominance, opened it to Western thought, and became the richest woman in history. It says plenty about Mirren’s influence that, magically, the Elizabeth I dream team reassembled for this new project: producers David Thompson and Charlie Pattinson garnered interest from Sky and HBO, and Nigel Williams penned a four-episode script. Phillip Martin, who’d directed Mirren in Prime Suspect, came on board too.

“There are other women like her in history, but she’s an extraordinary female figure,” Mirren says at a considered pace, when asked what piqued her interest in Catherine. “For me, it’s important to remind the world what women are capable of if they’re given the opportunity – or if they take the opportunity, because in Catherine’s case, she just took it.

“Physically she lived for a long time, but also she ruled for a long time too. So to maintain her health and her mental capabilities, and her bodily safety in very dangerous times, was such an extraordinary achievement.”

When Mirren initially talked about playing Catherine, she didn’t consider it feasible, as much of the interest lies around a younger Catherine successfully conspiring against her husband; it’s why Catherine Zeta-Jones and a 33-year-old Marlene Dietrich played her in previous dramatisations. But the tenacity of which Mirren speaks was enough to create a story from the latter part of her life.

“The whole trajectory of Catherine’s life was incredible, [but] so often films suddenly finish at the age of 30. Nothing happens after that. But in real life and certainly in Catherine’s life, that was just the beginning. She got her ‘the Great’ title after the age of 35, when Potemkin started expanding the empire of Russia. For me, to show older women as powerful, active, courageous, smart is important.”

Mirren’s Russian roots strengthened the personal connection. Well before she rose to prominence in films such as Cal, in which she plays a woman widowed by the Troubles, and The Madness of King George, opposite Nigel Hawthorne, she was born Ilyena Lydia Mironoff. Her diplomat grandfather settled in the UK when the Russian Revolution broke out in 1917 and he was unable to return to the family home in Gzhatsk.

“My father, who came to Britain aged two, felt that we were British and we should forget all that, it was gone,” she says. “But my grandfather very much lived in the past, because he was the one who was due to inherit the estates and be the landowner. He wanted to keep our Russian history alive as much as possible.”

Her turn as Catherine the Great is all you’d imagine it to be; she dazzles in her role, aided by lavish costumes and opulent locations, including Russian palaces in Latvia and Lithuania, plus, in Russia, Peterhof Palace and Catherine Palace. “That made an incredible difference,” she says. “As sumptuous and beautiful as our sets were, with incredible attention to detail, nothing is quite like standing in the absolute spot surrounded by those extraordinary buildings.”

It was only to be expected, given the Sky and HBO partnership “is the Rolls-Royce of TV production,” she says. “If you’re doing something about Russia in the 18th century, in Catherine’s court – the wealthiest property in the world at that time – it’s got to have huge production values.”

Helping bring the story to life is Rory Kinnear as the minister Panin, one of the many around Catherine who can’t be fully trusted. Jason Clarke plays Grigory Potemkin and Richard Roxburgh is Grigory Orlov, both of whom are Catherine’s military advisers and, at different times, her lovers.

Of course she was flawed, but there’s a sweetness about her. She didn’t want sex, she wanted love, romance

Indeed, if there’s any knowledge we might have about Catherine the Great, it’s about her libido – and never mind the affairs, she was widely believed to be partial to sex with a horse. The first biopic committed to screen, in 1934, was entitled The Scarlet Empress and alluded to these rumours. But they’re far from the truth, says Mirren.

“We’re all terrible gossips. We love sexy gossip, and the sexy gossip around Catherine was [because of] Frederick the Great,” she says of Catherine’s Prussian counterpart. “He loathed Catherine because he hated women being in power, and didn’t think they should be. He was the one who started this calumny against Catherine.

“When you actually read her letters and you read the real history, you see someone with such humanity and courage. Of course she was flawed, but there’s a sweetness about her. She didn’t want sex, she wanted love, romance. She was a serial monogamist. Yes, she had a series of affairs but she was quite open about it.”

Funny how some things never change. Attempts to undermine powerful women continue on the day we speak, albeit in a different context: it’s the day that reactions to Greta Thunberg’s speech to the UN roll in, featuring a litany of (mainly male) personalities rubbishing her efforts. For starters,commentator Michael Knowles calls her “a mentally ill Swedish child”on Fox News, and former Trump aide Sebastian Gorka tweets that her “performance” was “disturbingly redolent of a victim of a Maoist ‘re-education’ camp”. Later, Jeremy Clarkson chimes in, calling her “a spoilt brat”.

“It’s an interesting question: if Greta was a 16-year-old boy, would he be treated differently? I think he would be treated differently,” says Mirren. “Anyone who pops their head above the parapet is going to be shot at. But because she’s a girl there’s an immediate attitude that you can dismiss her, or demean her.”

In these turbulent times, there’s often comfort in historical dramas, as they remind us that however bleak things look, it’s at least nothing new. Sitting a stone’s throw away from the Houses of Parliament in London as it falls into disarray, I ask if there are any learnings of leadership to be gleaned in Catherine the Great.

“Obviously Catherine wasn’t democratically elected. And therein lies the rub,” says Mirren. “She could be murdered, she could be thrown in prison, but she could not be elected out of office.

“Democracy is incredibly important and a wonderful system. I feel it’s still finding its feet. But one of the problems with it – and I think we’re seeing it in both American and British politics – is that once congressmen or women or members of parliament get a taste of that power, they don’t want to let it let it go. So they will do and say almost anything to make sure they get elected again. That’s the danger because you have people who let go of their personal sense of moral compass for the sake of their own ambition. I so admire the ones who don’t do that. You’ve seen it in recent days, certain politicians here in Britain stand up for what they what they feel is morally and philosophically correct. And then you see others who don’t.”

Without giving the ending away (though, are there really spoilers in historical dramatisations?), we will say it doesn’t lend itself naturally to a second series, which is unusual for a show that’s primed to be a hit.

“History is history,” Mirren shrugs. “History comes to an end, doesn’t it? If there was a second season, it may be the prequel with a young Catherine. Unfortunately, I couldn’t be in it, but it would be a pretty incredible story.”