TV guide: 14 of the best shows to watch this week

Royal babies, the death of Jill Dando, and the return of Graham Norton and Jamie Oliver 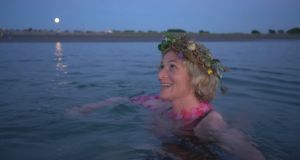 Vitamin Sea
Monday, RTÉ One, 9.35pm
We are surrounded by water. The sea is a source of therapeutic treatment and re-energising for many; for others it’s a place to unwind and let the cares of the world ebb away on the tide. This documentary follows eight people who regularly take to the water for various reasons, whether it’s to deal with grief or loss, manage physical or mental health issues, or simply to hit the refresh button. Among them are Mark Earley, whose wife Liane died in 2017. By swimming daily in the Forty Foot, Mark deals with his grief one day at a time. We also meet Ray Murnane, who is confined to a wheelchair after a serious motorbike accident and hopes to get back into the water. Others include 75-year-old Anne Shanahan, who suffers from polio and finds freedom by swimming; the “Traught mermaids” who meet for swims under a full moon at Traught beach in Kinvara, Co Galway; and Susan Steele, who swims every day and is so convinced of the sea’s benefits to the immune system that she’s writing a book about it.

The Brexit Storm: Laura Kuenssberg’s Inside Story
Monday, BBC2, 9pm
With Westminster in crisis and the prime minister striving to get her deal through Parliament, the BBC’s political editor takes viewers through every twist and turn of the most extraordinary political story of recent times. Cameras follow key politicians as well as Kuenssberg as she reports on exceptional events, from Theresa May’s doomed efforts to secure backing for her Chequers plan to cabinet resignations and backbench plots.

With the Duke and Duchess of Sussex about to become parents in the next month or two, royal baby fever will soon be gripping the world again. Britain’s royal babies used to be born and raised behind closed palace gates – they didn’t even go to school and access was restricted. Today they are part and parcel of the commercialisation of the royal family, and the documentary looks at what expectant mum Meghan can learn from previous royal mothers. Viewers get to see the nanny school in Bath (the go-to place for royal childcare) and Glamis Castle in Scotland, where the young princesses Elizabeth and Margaret escaped the glare of the media and formality of the royal court.

Jill Dando, the popular BBC newsreader and Crimewatch presenter, was shot and killed 20 years ago this month. The crime took place on her doorstep in the middle of the day and remains unsolved. This documentary tells the story of the investigation, drawing on interviews with detectives, as well as Dando’s friends and family, and access to previously unseen photographs and material. The film looks back at how the murder shocked Britain, as well as whether the sheer amount of public scrutiny hampered the investigation. It explores the forensics, theories and decision-making behind the case and asks if it will ever be solved.

Inside Britain’s Storms
Tuesday, UTV, 9pm
Although Brits are famously keen to talk about the weather, there isn’t always a lot to say other than it’s a bit damp or mild for the time of year. But that hasn’t been the case this winter, as the UK experienced floods, gale force winds, lightning strikes and arctic snow fall. Using exclusive footage, eye-witness accounts and satellite tracking, presenter Becky Mantin follows some of these big weather events, in the process revealing the worst Mother Nature can throw at us.

Bailte
Wednesday, TG4, 8.30pm
Síle Nic Chonaonaigh vists the Mac Monagails, whose family have lived on Taobh an Locha in the heart of Co Donegal for generations. She learns just how connected patriarch Hughie and his relatives are to the area.

Silent Witness star Emilia Fox examines how modern policing techniques can be applied to one of the most notorious cold cases in British history. Between August and November 1888, five horrifically violent murders took place in Whitechapel, all of them involving poor, working-class women. The crimes launched a huge manhunt, but the killer was never found. Here Fox is joined by some of the UK’s top forensic experts attempting to identify Jack the Ripper. They also ask how he escaped justice, what motivated his crimes, and if he might have been responsible for more killings. They will also look at the victims, discovering what made them vulnerable to a serial killer.

Celebrity Painting Challenge
Thursday, BBC1, 8pm
Mariella Frostrup presents this four-part competition, in which actress Jane Seymour, musician and presenter George Shelley, cricketer and broadcaster Phil Tufnell, model and DJ Amber “daughter of Simon” Le Bon, presenter Josie D’Arby, and TV personality Laurence Llewelyn-Bowen pick up their brushes and show off their artistic skills. In this opening episode they are asked to capture a nude Keith Allen on canvas. That might prove easier than their second challenge: producng a self-portrait.

Kevin McCloud follows 10 households in Bicester, Oxfordshire as they embark on a five-year mission to construct their own homes and create a new street as part of Britain’s biggest self-build project. The first edition focuses on retirees Terry and Olwen and their neighbour Lynn, the three most senior builders on the street, as they set out to create their bespoke homes. The designs are bold but the construction process throws up several challenges, putting the old friends’ relationships to the test.

Code Blue: Murder
Thursday, UTV, 9pm
The first of two documentaries following separate murder investigations, from the first “code blue” call through to the to the convictions of the killers. Detectives are called to a flat in Cardiff where the body of a young mother has been found with stab wounds. The key suspect is her boyfriend of six weeks, who has gone missing. However, they are able to track his mobile phone to the neighbouring police area around Bristol, where he is still sending text messages to the victim’s family. But then he turns his phone off.

The Graham Norton Show
Friday, BBC1, 10.35pm
Norton is back with a new series. Tonight two-time Oscar winner Sally Field and actor Bill Pullman discuss appearing together on stage in All My Sons at London’s Old Vic Theatre. Set in 1947, Arthur Miller’s play is quite a dark affair, touching on the excesses of commercialism, long-buried truths and family divisions. Plus, The Lumineers perform their new single Gloria.

The first programme in a new six-part series from Fleadh Cheoil na hÉireann, which came from Drogheda, Co Louth for the first time, is presented by John Creedon and Muireann Nic Amhlaoibh. The programme features music from Drogheda native Zöe Conway as well as Tommy Fitzharris and Donal McCague, Roisin O’Flaherty and friends, Spleodar and Téada. Other guests include Stockton’s Wing, The O’Connor Family, Hothouse Flowers, Emma Corbett, The Mac Gabhann Family, Bobby Gardiner and many more. An international flavor is provided by musicians from the US and Japan.