Guardian axing its popular Saturday supplements is an odd decision 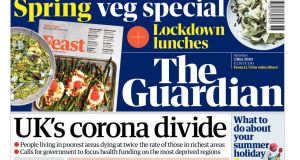 If you’re looking at this on your phone, you may be one of those readers who has forsaken print or never picked up the habit of reading a physical newspaper in the first place. If you’re reading it in print over a cup of coffee, you’re more likely to be one of those who, although they may not buy a paper every day, still enjoy a leisurely Saturday morning browse through the various supplements. These categories are fluid and vary from person to person, of course, but two facts are clear. The migration away from print towards digital continues, but the weekend versions of printed newspapers are holding up better than the rest.

So it was surprising that the Guardian this week announced its Saturday newspaper would bear the brunt of a new round of cost-cutting, with its Guide, Weekend, Review and Travel print sections all getting the chop. It’s unclear as yet what the shape of the new Saturday paper will be, but there’s no doubt it will be considerably smaller. “We will be discussing our proposals for a new Saturday package later on in this process,” an internal Guardian memo stated unhelpfully on Wednesday.

On the face of it, this is an odd call. It clearly came as a shock to high-profile Saturday columnists such as Hadley Freeman, who tweeted that “it has been such an honour to be a Weekend columnist and writer, as well as a contributor to Review. My dream job since I was a teenager, and so many brilliant people who work so hard on those sections. It’s a cliche, I know, but I’m honestly heartbroken.”

Like most dailies (this one included), the Guardian’s circulation has been in decline for more than a decade. But, like other newspapers, weekend sales have fared relatively better, with Saturday’s circulation of 221,000 more than twice the weekday average. Readers who prefer digital for their news and journalism during the week still seem to appreciate the joys of a more leisurely experience over a coffee and croissant on a Saturday or Sunday morning. And the weekend editions, with their multiple supplements and sections focusing on culture, lifestyle, less focused on breaking news and more on longer-form writing, offer a product which is less easily replicable online.

Readers have expressed bafflement at the decision but, for many years now, the Guardian has ploughed its own particular furrow when it comes to coping with digital disruption. While nearly every other quality newspaper in the English-speaking world has introduced a digital subscription model of one sort or another, the Guardian has remained free to access, albeit with an increasingly aggressive drive to monetise audiences through donations and membership schemes. For 20 years, it has been at the forefront of worldwide efforts to move media away from print-centric operations and towards a “digital first” model. This week’s memo proposes “a reorganisation in the ways we produce our journalism so that our editorial processes are truly digital-first”. Anyone who has darkened the door of a media company in the 21st century could copy and paste that phrase from a thousand other restructuring documents. But with the Guardian, it has seemed at times as if the company wanted to accelerate the demise of its printed newspaper so that it could become purely digital as soon as possible.

This bold strategy would be more impressive if it weren’t for the fact that the Guardian has lost vast amounts of money in pursuit of it and would be insolvent by now if it hadn’t been able to draw on the substantial reserves held by its parent company. After years of proflicagy, attempts to get costs under control appeared to be working for a while, but they faltered last year, even before the pandemic hit. Editor-in-chief Katharine Viner and Guardian Media Group chief executive Annette Thomas now say revenues will be down by more than £25 million (€27.6 million) this financial year, and that the pandemic has created an “unsustainable financial outlook.”

The Guardian is not the only media company in dire straits as a result of Covid. The BBC and the owners of the Mirror and Express newspapers have also announced hundreds of job losses. Expect similar stories closer to home very soon as newspapers and broadcasters here begin to reckon with the collapse in advertising and impending recession. Concentrating cuts on the most popular day of the week does seems quixotic, though. Big multi-section weekend papers have not been around forever - they were originally a product of advances in colour printing and production technology in the 1980s – but they have found a place in readers’ affections which they clearly still retain. Without them, would your Saturday morning be the same?