Derry Girls: ‘I’m not enjoying this bomb. I’ve an appointment at Tropicana at 12’

Creator, writer and producer Lisa McGee explains what’s made ‘Derry Girls’ a success, the influence of Dolores O’Riordan, and what she has in store for series two 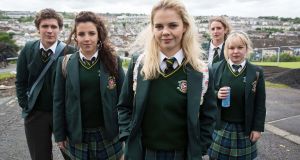 “I don’t think 10 years ago I would have been able to set a show in Derry,” says Lisa McGee, the writer who’s put the city front and centre of comedy in 2018. “Maybe it’s the Netflix phenomenon that we’re watching shows from all over the world, so viewers aren’t afraid of the unknown – if anything, unknown places are now interesting as a setting. I think that’s great.”

It is, if it’s allowed McGee to tell the story of her home city. Channel 4’s Derry Girls is loosely based on her teenage years in a convent school during the Troubles in the 1990s, when she was more preoccupied with boys than bombs, making for a wry and realistic take on growing up in a city-wide battlefield. “I’m not enjoying this bomb. I’ve an appointment in Tropicana at 12 . . . sure I’ll not get over the bridge at this rate,” Aunt Sarah [Kathy Kiera Clarke] sighs in the first episode, setting out its stall. Over 2.5 million viewers tuned in to watch it, making it Channel 4’s highest-rated comedy launch since Ricky Gervais unveiled Derek five years ago. It’s easy to see why; the contrast between the tense political situation and the Inbetweeners-style escapades of a group of 16-year-olds ­– the lead cast of Erin, Orla, Michelle, Clare and James – is ripe for well-written, sharp humour, especially when the characters naturally demonstrate Derry’s hardy nature and colourful language.

“Of course there’s always going to be someone who’ll think it’s not appropriate,” she says of the sensitive nature of the backdrop. “But because I grew up there, I have a good sense of where the line is. I know bomb scares were so frequent they became mundane. I know people complained about not being able to get to the shop. That was my experience, which I’m telling through a 16-year-old’s eyes.”

No stranger to drawing on her own life, McGee, who moved to London a decade ago and is now married to actor/writer Tobias Beer, was also the writer behind London Irish. Another Channel 4 sitcom, its six episodes shone a light on the experience of young expats who moved to find their fortune in the capital, though it wasn’t as unanimously lauded as Derry Girls.

“I think that’s because of what they were about,” she reflects. “London Irish was about a fish-out-of-water group of friends in their 20s who were a little wild. Even though there’s the background of the Troubles, Derry Girls are about more innocent times before life gets complicated, and maybe we all look back at that time fondly. People seem to like the nostalgia of it, maybe.”

It’s an effective device in the sitcom world, employed since comedian Chris Rock appropriated The Wonder Years format to rewind time and narrate his atypical childhood in Everybody Hates Chris, a decade ago. As we continue to look past stereotypes and explore stories of diverse backgrounds, Derry Girls, Fresh Off the Boat (about an American-Taiwanese kid growing up in the 1990s), The Goldbergs (a Jewish family in the 1980s) and Raised by Wolves (a reimagining of Caitlin and Caroline Moran’s working class childhood in Wolverhampton) all highlight that growing pains are common to us all, regardless of background.

We open the series with The Cranberries . . . Their music takes me right back to my childhood

Unsurprisingly, the nostalgia factor is high in Derry Girls. It’s evoked in the 1990s home decor (a source of amusement in itself) and stonewashed denim, and especially the soundtrack, which includes Cypress Hill, Whigfield and The Cranberries. This adds yet another layer to the tragedy of Dolores O’Riordan’s death, which occurred as the show, now mid-way through its run, reminded us about the power of her music.

“We open the series with The Cranberries, and close it with them too, so they frame the whole season,” says Lisa. “Their music takes me right back to my childhood.

“I remember watching [cult series] My So Called Life, and Angela [Claire Danes] was dancing to The Cranberries. I was at home going, ‘they’re Irish!’ It was an important thing to see. It’s just so tragic, she was so young.”

Like the lead Derry Girl Erin, McGee had ambitions to be a writer when she was young. Studying drama in Queen’s University Belfast, she later landed a coveted role as Writer on Attachment at the National Theatre in London in 2006, and scripted plays like Girls and Dolls (her debut, which won both the Stewart Parker Award and the Blackburn Prize) and Jump (later made into a film starring Charlene McKenna and Martin McCann). Moving into TV, she created and led the writing for RTÉ’s restaurant drama Raw, before lending her talents to the BAFTA-nominated Being Human and Indian Summers. So by the time it came to penning her most personal project, she was well-equipped.

“I tinkered with the pilot of Derry Girls for a year, writing most of it while I was pregnant with my first baby,” she explains. “That episode was the hardest part because I didn’t know who the characters were, or what the balance of the show was, or how involved the family would be. Once I’d crossed that pilot and knew the world a bit, it was about finding the stories that worked for the characters. It all clicked in a bit better.

“I handed the script in on my due date and it was green-lit when my son was five months old, so it was a weird time for me. I think it was the only thing I could have written at that time, because it was joyful to reminisce and try to make people laugh. If I had been writing a hard-hitting murder story, I wouldn’t have been in the right frame of mind.”

I wrote when I had a chance to write. I was taking my baby to coffee shops, and writing while he was sleeping

Being a new mum meant that for the rest of the scripts, she was forced to ignore the writerly rules that many swear by.

“All the things that you think help, like buying a new notebook for each project, they don’t help really,” she says. “I wrote when I had a chance to write. I was taking my baby to coffee shops, and writing while he was sleeping.

“The only thing I do make sure of is to give myself an aim when I sit down to write, like I give myself the goal of finishing a scene before I leave the house. And if I have the option, I prefer blocking out a stretch of time. Once I start, I like to keep going because I’m always worried if I stop, it will be gone.”

Given the high bar set with the first series, it’s no surprise that it’s already been commissioned for a second. But she’s also working on a six-part Donegal/Cambridge marital thriller with her husband “about a new marriage where the partner’s not who you thought they were” and another pilot entitled The Half, she’s only just begun plotting their continued adventures.

“I’ve just started to jot down ideas. For example Bill Clinton came to the area in 1995, and all the hoo-ha about him coming was hilarious. I’d love to try and tell that story as part of the next series.”

“We haven’t discussed that yet but because I’m just thinking about writing it, it probably wouldn’t be 2018.”

If it’s anything like the first instalment, it will be worth the wait.

‘Derry Girls’ continues on Channel 4 on Thursdays at 10pm

WB Yeats, the Spanish flu and an experiment in quarantine