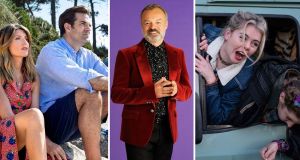 Graham Norton, Aisling Bea, Sharon Horgan, Andrew Scott and the writer of Derry Girls are among the Irish actors, entertainers and writers in the running for this year’s television Baftas.

Derry Girls, written and created by Lisa McGee, and Catastrophe, which Horgan wrote, created and starred in with Rob Delaney, are up for the scripted comedy award, while The Graham Norton Show is up for comedy entertainment programme. Graham Norton has also been nominated for best entertainment performance.

Bea has been nominated in the breakthrough-talent category for her writing on This Way Up, her Channel 4 show, which also costarred Horgan.

Scott has been shortlisted for the confessional scene between his character and Phoebe Waller-Bridge’s in the final season of Fleabag; it is joined in the must-see-moment category, which is decided by public vote, by the BBC police drama Line of Duty, which stars Adrian Dunbar.

This year’s nominees are led by The Crown and Chernobyl. Netflix’s portrayal of the British royal family is up for best drama series. Helena Bonham Carter, who plays Princess Margaret in it, and Josh O’Connor, who plays the young Prince of Wales, have been nominated as supporting actress and supporting actor. But the Oscar-winning Olivia Colman, who plays Queen Elizabeth, has missed out.

Chernobyl, Sky’s unflinching portrayal of the events surrounding the 1986 nuclear disaster, is a heavy hitter in the nominations. It is up for best mini-series, as well as leading actor for Jared Harris and supporting actor for Stellan Skarsgard. Chernobyl is showered with nominations – 11 – in the craft categories, meaning it is the biggest nominee, with 14, for the TV and craft gongs combined.

As well as its confessional scene in the must-see-moment category, Fleabag is up for three of the main TV awards, including scripted comedy. Phoebe Waller-Bridge and Sian Clifford, who played sisters in the show, are both nominated, for best female performance in a comedy programme.

Dominic Cummings’s story, as portrayed in Brexit: The Uncivil War, could win best single drama for Channel 4. It featured Benedict Cumberbatch in the role of the Vote Leave mastermind – before his time as Number 10 adviser – and told the story of the controversial, data-driven political campaign for Brexit.

Glenda Jackson is up for leading actress, for her return to the screen in the BBC One drama Elizabeth Is Missing. She is up for the gong for her role in the drama on a “woman’s struggle with dementia”, 50 years after her first nomination for a Bafta film award. The actress and former MP is up against Jodie Comer in Killing Eve, Samantha Morton in I Am Kirsty and Suranne Jones for Gentleman Jack.

Newsnight’s interview with the Duke of York is in the running for best news coverage.

Leaving Neverland, the explosive documentary that featured interviews with two men who allege the late Michael Jackson routinely abused them as boys, is up for best factual series.

The BBC has 48 TV Bafta nominations, excluding craft, while Channel 4 has 22, ITV has 10, and Netflix and Sky both have eight.

The Virgin Media British Academy Television Awards ceremony will air on Friday, July 31st, on BBC One. The awards will be hosted by Richard Ayoade behind closed doors, and winners will accept their gongs virtually.

TV Baftas: The 2020 nominations in full

The ‘Templemore Miracles’: How a fake bleeding statue led to an IRA truce
10

Life, death and the secrets that lie between
Real news has value SUBSCRIBE