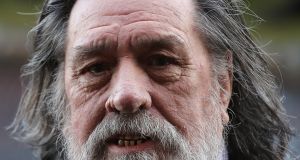 Ricky Tomlinson has campaigned to clear his name after being jailed during a strike in the 1970s. File photograph: Christopher Furlong/Getty Images

The criminal convictions of the British actor Ricky Tomlinson, who starred in the TV comedy The Royle Family, are to be re-examined by UK appeal-court judges after an official body suggested he may have been unjustly jailed.

Tomlinson and other trade unionists have been campaigning for years to clear their names after they were jailed during a strike in the 1970s.

On Tuesday, the Criminal Cases Review Commission, the British public body that scrutinises alleged miscarriages of justice in the UK, announced it had asked the court of appeal to review the cases of Tomlinson and others.

Tomlinson, who is 80, said it was good news, and an opportunity to prove that he and 23 other men were prosecuted in what amounted to a politically motivated attack on the trade-union movement by the government, police and managers.

He worked as a plasterer in the construction industry before becoming well-known as as an actor in films such as Raining Stones and Riff-Raff.

Tomlinson was jailed in 1973 for two years during a strike after he was convicted of conspiring to intimidate and affray. He had taken part in the first national building workers’ strike in 1972 to improve wages and safety regimes on sites.

Months after the strike ended, 24 trade unionists were arrested and prosecuted for offences including unlawful assembly, conspiracy to intimidate, affray and threatening behaviour while picketing.

After a series of three trials at Shrewsbury crown court in Shropshire, they were convicted of sentences ranging from three years’ to three months’ imprisonment suspended for two years.

For years, campaigners have been seeking to clear the names of the convicted – who became known as the Shrewsbury 24 – as they believed that they were persecuted in an attempt to suppress trade unionists at a time of increasing workers’ militancy.

The CCRC has decided to ask the appeal court to re-examine the cases of 14 of those convicted after investigating their claims.

The CCRC initially refused to send the cases to the court of appeal but changed its decision after a legal challenge by some of the trade unionists. Helen Pitcher, the CCRC’s chairman, acknowledged:”Some will think this has not been the commission’s finest hour.”

The CCRC said its decision was based on fresh evidence arising from a 1973 note that showed that some original statements had been destroyed. The commission said this had not been shown to the lawyers defending the men at their original trial.

The CCRC also highlighted a television documentary, Red under the Bed, about leftwing trade unionists, which was broadcast during the first trial in 1972.

Lawyers for defendants had unsuccessfully argued at the trial that the documentary had unfairly influenced the jury.

Documents discovered in the national archives have shown that a covert Whitehall unit had a “discreet but considerable hand” in the programme by supplying its makers with a large dossier about allegedly leftwing trade unionists.

A Whitehall official noted what he called “a good effort” by the Information Research Department, the Foreign Office unit that had been set up during the cold war to produce anti-communist propaganda abroad.

After Tomlinson was convicted, he was blacklisted and struggled to land work. He became an actor and got his break in the 1980s when he played Bobby Grant in the Channel 4 drama Brookside. – Guardian