Including Queer Eye, Dating Around, The Politician, Athlete A, and a Eurovision spoof 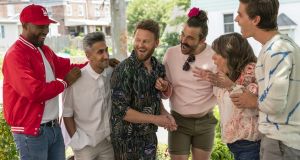 June 5th
Our self-care overlords are back for a fifth season, having travelled to Georgia, Missouri, Kansas and Tokyo among other places, this time the Fab Five are on a mission to spruce up the denizens of ‘The City of Brotherly Love”, Philadelphia. Using their best pomade, sandwich fixings and homespun philosophy they attempt to spread some joy and instil some pride into new “heroes”, who include an insecure gay clergyman who is struggling with his identity and a self-conscious, statuesque woman who feels she’s invisible to men. Queer Eye may not be the untouchable sensation it once was, with criticism directed at the superficial – Antoni’s dubious cooking skills and sponcon overkill to more serious issues like the problematic episode that featured a disabled hero and lifestyle guru Karamo Brown’s ever-more fanciful advice. It proves that the show and their experts are as flawed as their participants and that a more humble Queer Eye is necessary for its promotion of humanity and its future success.

June 10th
Filmed prior to the outbreak of Covid-19, this documentary series follows four doctors at the famous Upper East Side hospital, as they deal with their areas of speciality from brain surgery to obstetrics and gynaecology. It may look like an American amalgamation of the hit Channel 4 shows, 24 Hours in A&E and One Born Every Minute but the noted difference is how it underlines the pressure and frustrations of working within the US healthcare system. It also serves as a timely reminder of the challenges these frontline workers face and the sacrifices they so readily make for others.

June 12th
Spike Lee’s Vietnam war drama focuses on the conflict and turmoil that stewed within black soldiers fighting for a country that still denied their Civil Rights. Upon learning of the death of Martin Luther King at the hands of a racist white American, five young men stationed in VietCong confront an issue that still resonates today, why die for a country that doesn’t think their lives matter anyway? As with all Lee films, Da 5 Bloods is an explosive mix of genres, skipping from combat drama to buddy comedy to crime caper as the tone swings from farcical to righteous outrage. Starring Delroy Lindo, Clarke Peters, celebrated Broadway actor Norm Lewis and The Wire’s Isiah Whitlock Jnr, it tells the story of four veterans returning to Vietnam in search of the remains of their squad leader, Norman (Chadwick Boseman) whilst also attempting to locate a batch of gold bars that were lost in the jungle warzone by the CIA.

June 12th
After the success of the preposterous thriller The Stranger comes The Woods, another Harlan Coben adaptation. With the story re-routed to Poland, it centres around prosecutor Pawel Kopinski (Grzegorz Damiecki) who is dealing with the psychological distress of losing his sister, who went missing in the woods near her summer camp 25 years ago. When the body of a boy is discovered it emerges that he disappeared along with Pawel’s sister, which leads to new hope that she may still be alive. As with all Coben stories, The Woods is full of twists and surprises as dark family secrets come to the fore, which plague the determined prosecutor.

June 12th
Jessica and her wine-connoisseur dog may have captured the cultural conversation on the outrageous Love is Blind, but the almost-forgotten Dating Around could be Netflix best kept secret. Back for a second season, this show with the comically simple premise, is First Dates on steroids. A nervous singleton is put on display, as we accompany them on five separate blind dates in the hope that they will find someone not entirely objectionable to pursue for a second meet up. As various dates are chopped up and spliced together it becomes a montage of first moments that ingeniously forces the viewer to rate the success of the dates as we witness each flutter of the eyelashes, flick of the hair and flirtatious banter. Addictive, infuriating and thrilling, it’s a bittersweet memory of the excitement of dating before the spectre of social distancing.

June 19th
The Sinner returns with this third instalment of the dark anthology melodrama. Bill Pullman reprises his role as craggy detective archetype, Harry Ambrose, who is investigating the seemingly straightforward case of a car crash which leaves passenger Jamie Burns (Matt Bomer) as the sole survivor. When a routine witness questioning uncovers curious new details about the crash, the story surrounding expectant father Jamie and the death of his old college friend begin to unfold. With a supporting cast that includes Chris Messina (The Mindy Project) and Jessica Hecht (Breaking Bad), The Sinner remains a strange beast, a schlocky, sometimes exploitative drama that has an irresistible, compelling quality that keeps viewers captivated.

June 19th
Another month on Netflix means another Ryan Murphy vehicle, this time it’s the second season of his maximalist student council dramedy, The Politician. Following on from its colourful, time-hoping first instalment, Payton Hobart (Ben Platt) is attempting to unseat Senate Majority Leader Dede Standish (Judith Light) in the New York State Senate race. The one-time perfectionist holds a secret about Standish that could derail her campaign and destroy her reputation which leads Hobart into a philosophical predicament as he tries to decide what type of politician he wants to be. Not to be outdone by her son, his pushy mother Georgina (Gwyneth Paltrow) has her own plans that threaten to eclipse Payton’s big moment and steal the limelight from him.

June 19th
Calamitous game shows where participants suffer mild torture are nothing new, from the iconic Takeshi’s Castle to Total Wipeout there has been a parade of perilous obstacle course shows that fill viewers with a certain vicious glee. Floor is Lava is the latest pretender to the throne, taking its name from the children’s game where contact with the ground must be avoided. Contestants swing from giant oversized chandeliers, jump from chairs and glide along curtains to safety or risk slipping into the “lava” beneath. Silly, pointless and utterly futile, it could be a metaphor for modern life.

June 24th
This powerful documentary tracks how investigative journalists from the Indianapolis Star newspaper exposed the abuse of young professional gymnasts by their physician Dr Larry Nasar. Interviews with athletes such as Maggie Nichols, disclose information about a toxic sports institution that endeavoured to conceal Nasar’s criminal behaviour. This empty focus on success at any costs by the executives of USA Gymnastics led to them failing to report Nasar and gaslighting the vulnerable juveniles they should have been protecting. It’s a damning look at the systematic oppression within this elite world, the effective silencing of young women’s voices that struggled to be heard.

June 26th
As audiences were deprived of the surreal spectacle that is Eurovision this year, Will Ferrell’s affectionate parody is a somewhat satisfactory replacement. Co-written by the comedian and directed by Wedding Crashers’ David Dobkin, Eurovision Song Contest: The Story of Fire Saga sees Mean Girls’ Rachel McAdams and Ferrell playing Sigrit and Lars, an Icelandic singing duo who are representing their country at the international event. They are joined by a mullet-sporting Dan Stevens (The Guest) and a game Pierce Brosnan who plays Ferrell’s father “the most handsome man in Iceland”. Set in 1972, it features an abundance of wigs, glitter and shiny leggings to keep avid Eurovision fans happy. While it’s difficult to replicate the peculiar magic of the real thing, the mock video for the duo’s entry, Volcano Man, perfectly lampoons that certain strain of earnest madness that makes the contest so enjoyable.