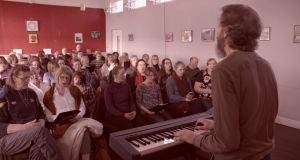 David Brophy is trying to get his choir of family carers to put a bit of punch into a line from (Something Inside) So Strong, telling them that when they sing the words “they insist we’re just not good enough... we know better” there needs to be some anger. “You’ve all been there,” he reminds them, “you’ve all been dealing with the HSE.” They laugh, then sing with all the punch they can muster.

Unsung Heroes (RTÉ One, Wednesday, 9.35pm) follows Brophy’s hugely successful The High Hopes Choir and Choir of Ages, the conductor this time assembling a choir from among Ireland’s 355,000 family carers, most of whom, he says, “feel abandoned by the State”. When he hears their stories, and the lack of support so many of them receive, he is angered enough to tell a meeting of Family Carers Ireland that “I feel ashamed to be Irish.”

Among the stories we hear is that of Jane, who has two sons with autism and whose husband died four years ago, after a heart attack. Brophy stays a night at her home to get a glimpse of her life – one, he discovers, that can be both lonely and exhausting. But he is moved by the loving tenderness she shows her boys, especially Evan, who also has a number of other conditions.

Phil and Betty’s 34-year-old son, Jason, has cerebral palsy and has used a wheelchair all his life. Phil sings to Jason, his rendition of My Forever Friend leaving his son beaming. Phil and Betty’s greatest fear is that Jason will outlive them both and end up in a nursing home, the mere thought of which brings tears to his mother’s eyes.

Fiona and Dave have the same worries for their two sons, both of them also with cerebral palsy, while Hannah cares for Patrick, her husband of 48 years, who was diagnosed with Alzheimer’s disease a year and a half ago. “There is this terrible loneliness for me,” she says, “but I will love him till the end.”

Brophy wants their involvement in the choir both to be therapeutic and to bring “some fun, pleasure and enjoyment to their lives”, a chance to “forget about all their troubles, even for a few minutes”. And meeting up each week in Wexford with people who face many of the same daily challenges gives them the chance to share their stories and offer each other support.

“You can get lost in your caring role,” says Jane. “You know, I’m a person too. But Thursday mornings are ours now.”

Brophy’s natural touch and humour are a delight, his recruits warming to him from their first meeting – and in no time he has them singing with confidence and loving every moment of the experience, one that will conclude in next week’s second part, when they perform at the National Opera House.

“Everyone is smiling now,” says Hannah. “It gives you such a boost. You feel young again.” And when her beloved Christy Dignam walks into the room to hear them sing Aslan’s Crazy World, before he performs it himself with them as his backing choir, Hannah is beside herself. “I am absolutely bursting with joy,” she says before giving Christy the mother of all hugs.

“How can I protect you in this crazy world?” they sing. A question they ask themselves every day as they care for their loved ones.