Dancing with the Stars: who’s going to win?

Anna Geary, Jake Carter and Deirdre O’Kane will tango it out in Sunday’s final 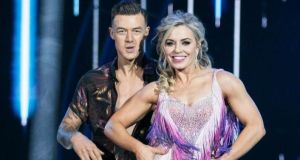 Since January, RTÉ’s Dancing with the Stars has had the “Glenroe Effect” of a Sunday evening, with the start of the show indicating that your weekend is most certainly over and that the alarms have to be reset for Monday morning. The show has guided us through Storm Emma, Grand Slam wins, unshakeable hangovers and more snow.

As Dancing with the Stars quick-steps it’s way to tonight’s final, we’re getting ready to kiss goodbye to all of the celebrities who have tangoed their way across our TV screens since the early days of 2018.

Tonight, after 12 beautiful weeks together, we can finally see whose handwork will be rewarded when they take home the Glitter Ball Trophy. Each couple will perform three routines on Sunday and while the judges will be scoring and critiquing each routine, the winner’s fate relies entirely on the public vote.

We had some good moments this season, most of them coming from 2FM presenter Bernard O’Shea, from his new dance crazed called Bum Bum Belly to uncanny cat impressions during his Viennese waltz to What’s New Pussycat. Some halftime show highlights include singer Gavin James performing his latest single Hearts on Fire, the cast of Flashdance the Musical, along with Strictly dancer Joanne Clifton, performing to Flashdance... What a Feeling and last week’s semi-final saw the DWTS professional dancers collaborate with Riverdance. This week, we will be treated to a performance from Picture This and a very special group dance with all of the previously eliminated celebrities returning to the dance floor.

Who’s in the final?: Actress and comedian Deirdre O’Kane, whose legs deserve their own honourable mention as they stole the show almost every week, Liverpudlian pop star Jake Carter, the 19-year-old brother of Nathan and camogie player, GAA All Star and proud Cork woman Anna Geary. Nicky Byrne and Amanda Byram will also be there, doing their best to read the cue cards and deliver more of their lame jokes and punchlines.

Who’s going to win?: Geary has been the strongest competitor since day one but there’s a fire in O’Kane’s eyes. She wants this and if it was up to me, I’d just give it to her but as it stands, Paddy Power’s betting odds for the outright winner have Geary at 2/7, O’Kane at 3/1 and Carter at 8/1. Carter ticks the boxes as a performer – good smile, nice abs, good rhythm – but Geary and O’Kane have something extra.

What dance routines will they be doing?: There will be no Dreaded Dance Off but each couple will dance three routines; the judges choice, the couple’s favourite dance and the show dance, which is an original dance created by the couple.

Geary and Kai Widdrington’s judges’ choice is the tango to David Bowie’s Rebel Rebel, O’Kane and John Nolan will perform their show dance to Robbie Williams’s Let Me Entertain You and Carter and Karen Byrne’s favourite dance is their jive to Bill Haley’s Rock Around the Clock, which they previously performed in week nine.