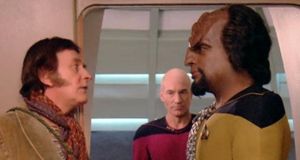 Star Trek – The Next Generation: Picard and Wharf with the pesky Irishman Danilo Odell

Sad as this is to contemplate on our Big Day, it’s not unusual for famous people to culturally appropriate our national name and wander about wearing it like it’s no big thing. So today I’ve taken it upon myself to analyse the Hibernian bona fides of the most famous Pats, Pattis and Patricks. The process will be entirely scientific (Pat-a-logical, if you will). I will endeavour to give each rogue Pat “Pat Points” out of 10 and thus decide whether they are true members of the “Pat-riarchy” (the official name for the League of Patriotic Pats) or are, instead, a Pat-etic sham.

Whenever I go to England, no matter how clever and wise I’m being, it often feels like the locals just see a ginger-bearded simpleton doing a happy jig and saying “diddly-eye, potato!” And, in fairness, I don’t even do that much anymore. I suppose I too have my blind spots. When I watch EastEnders, for example, all I can see is a bunch of pearly kings and queens having a knees-up, eating whelks and saying “lawks!”

Except when Pat Butcher was on it. Something about this scowling dangly-earinged matriarch made me feel patriotic and fighty. Perhaps it was her unrelenting chain-smoking miserablism, or perhaps it was the way she continued to appear to her loved ones in disturbing visions after her death. It just felt so Irish. Whatever it is, I’m giving her 10 Pats out of 10.

On the weird 1960s sci-fi show The Prisoner McGoohan spent most of his time trying to escape from a strange, regressive, time-locked island patrolled by large inflated bags of air. Plus ça change, says you. I mean, the Village was clearly meant to be Ireland. Also, in fairness, McGoohan was literally brought up in Ireland, so there’s that. 10 Pats out of 10!

Patrick Duffy was in Man from Atlantis, in which he played a crime-fighting merman who rejected shirts and lived sexily under the sea, much like the Dingle-based merman Fungie. Later he played Bobby Ewing in Dallas. Bobby was a simple cattle farmer who favoured the old ways while his brother JR cosied up to big business. After a disastrous period in which the family business tanked and Bobby ended up being violently killed by a spurned lover, his wife Pam woke up one morning to find that, to her surprise, he was alive and in the shower. The previous season, he explained, had all been a dream. Don’t worry about it, his happy smile seemed to say, I’m back and I’m never leaving again – have a leaflet! Yes, it’s basically what happened with Fianna Fáil. I grant him 10 Pats out of 10. He’s as Irish as they come.

The anti-heroic protagonist of Bret Easton Ellis’s American Psycho is what we in the Pat-riarchy call a “psycho-Pat”. Bateman likes crisp suits, the music of Genesis, a well-crafted business card, paranoid delusions and misogyny. Much as it pains me to say it, this makes him Irish, at least by the standards of the Celtic Tiger. So I give him 6 Pats out of 10. (I’ve subtracted a few Pats for all of the murdering he’s done, but sure even Michael Collins did a bit of that.)

Pat Benatar’s Love Is a Battlefield: 10 Pats out of 10

Patrick Swayze in Dirty Dancing: Another 10 Pats out of 10

Bright pink, shapeless and dressed in nothing but a tiny pair of shorts, Patrick the starfish is clearly an Irish dad from a summer in the 1980s. Who wouldn’t be proud to have him as a compatriot? We also welcome his unusually garbed aquatic friend, to whose house he moved after he left Mammy. 10 Pats out of 10.

“Love is a battlefield,” she sang as she danced angrily through gritty New York clubs of the 1980s.

“Pshaw!” we said. “You know what else is a battlefield, Benatar? Eight hundred years of Irish history. As for ‘love’, that might be fine for you lot over there in ‘America’, but we’re still getting our heads around all the repression, colonialism, Eurovision losses and iPhone updates we’ve had to contend with.”

On the other hand . . . it really is an excellent song. So I give Pat Benatar 10 Pats. Contact the nearest embassy for your Irish Patport. (It’s like a passport except reserved for Pats.)

During the peltless thespian’s spacefaring adventures he once encountered a bunch of space-Irish people straight from the pages of space-Punch. (They were all barefoot, drunken and literally carrying pigs, which is true of fewer than 25 per cent of Irish people today.) This is one count against him. However, he was also present when Data referred to Irish unification in 2024. So 10 Pats out of 10. Also, just six years to go!

There’s a case for and against Swayze’s Pat-rimony. Jigging germophobes in this country prefer cleanliness in their capering and were nonplussed by the filthy frolicking endorsed by Swayze’s character in the film Dirty Dancing. (They love alliteration, though.) However, in Point Break Swayze and a bunch of other hairy men go on a bank-robbing spree, and that reminds us a bit of the ’Ra . . . Ah who am I kidding? Dirty Dancing is brilliant. 10 Pats out of 10.

He came into this country illegally, refused to assimilate and began converting locals to his weird fundamentalist religion. Years later the place is unrecognisable – all steeples, guilt, estate agents, boiled vegetables, country music and canon law. Barely anyone on my street worships Danu, eats from a bottomless bronze cauldron or goes on cattle raids any more. However, this is The Irish Times, and I know we have a policy of embracing diversity, so 10 Pats out of 10. (This is, clearly, political correctness gone mad.)

I don’t know that much about Meghan Markle’s work colleague’s life and career. However, as the former on-screen love interest of Prince Harry’s fiancee, Patrick J Adams is, if I understand the laws of royal succession correctly, the head of the British armed forces now. If so, excellent infiltration work Agent 406! 10 Pats out of 10.