‘Isle of Dogs’: How Wes Anderson let his imagination off the leash 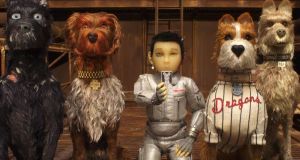 Anderson’s dogs don’t have traditional hind legs, but instead walk on what seems like two sets of front legs, akin to a table

Dog lovers and design lovers, perk up. Wes Anderson has a movie for you. The director, no stranger to the meticulous crafting of worlds, has created a canine-filled universe for the stop-motion animated Isle of Dogs.

The movie takes place in the fictional Japanese city Megasaki, where a dog flu has broken out. Fear sets in, and the humans exile all dogs to Trash Island. Though people are integral to the story, dogs of all colours, shapes and sizes really rule the movie.

Anderson wanted to put on screen dogs that look somewhat familiar to us but have heightened qualities beyond reality. That’s why, for instance, his dogs don’t have traditional hind legs, but instead walk on what seems like two sets of front legs, akin to a table.

“Finding that balance of dog anatomy versus what was more of a caricature,” Anderson said, “that was not preconceived. You sort of had to try it and see. Then try again and adjust.”

He worked closely with Andy Gent, the head of the puppets department, who, instead of sketching ideas, used clay to sculpt sample dogs. Those would be analysed and refined into what became the final characters. Gent had more than 70 artists on his puppet team, building (and sometimes rebuilding) these models. While some 500 dog puppets were made for the movie, here is a closer look at how four key characters came to life.

This dark-maned St Bernard voiced by F Murray Abraham has an air of wisdom and is respected for it. The filmmakers mostly used other dogs for reference, bringing them on set to watch their mannerisms and movements, then designing and animating the characters.

Gent even brought in his own pup, Charlie, as a model. But Anderson had a human in mind when it came to Jupiter. “We talked about Charles Laughton,” he says, the British film and stage actor with a larger-than-life screen presence.

Gent built wisdom and authority into Jupiter’s face with pronounced jowls. And he put folds in his skin and a degree of sagginess to suggest the gravitas of age. The team gave him gray fur for prestige, and a glass eye, which makes him stand out even more.

Scale plays an important part in the film’s design concept, and the differences in size between Jupiter and the tiny pug often by his side, Oracle, voiced by Tilda Swinton, make for an interesting contrast.

The filmmakers used the pug’s big, wide-set eyes and stare-y look as a plot point, making Oracle the dog that could watch television and keep the others informed about impending threats.

Each puppet has an armature — a metal, skeletal structure underneath — for movement. “The trickiest thing with the design with her is the fact that she is the littlest thing you’ve ever seen,” Gent says. “So it was a real challenge for the makers to get the mechanics inside her head to give her range and expression.”

Oracle was first conceived as more of a cream-coloured animal, but they changed her to a silvery white to balance against the darkness of Jupiter. When Swinton posed for publicity photos for the film, Gent says, she liked to wear Oracle on her shoulder like a little bird.

One of the film’s most alluring characters, Nutmeg (voiced by Scarlett Johansson) is a show dog with golden locks that somehow remain spotless on Trash Island. Her fur, and that of many of the dogs, was generated from alpaca and merino wool, the kind often used for teddy bears.

The designers spent the longest time on this character, something like 30 weeks, to get her right. Her colouring was inspired by a Gucci store Anderson had come across. He liked the range of hues in its decorations and clothing, and sent Gent’s team a photo, asking them to generate that tonal mood in the fur.

Bill Murray provides the voice for this pinstripe-jersey-clad dog. “We wanted to have one dog who was a baseball team mascot,” Anderson said, explaining his thought process: The dogs speak in English mostly with American accents, so this was a nod to a tradition, baseball, that the United States and Japan share.

Gent and his team first sculpted Boss as a scrappy, small bull-terrier type, but then decided to mix things up.

“We ended up pulling the head off of a different dog and putting it on a chunkier dog’s body,” says Gent. “So he became sort of a Frankenstein evolution.”

The more barrel-styled body turned out to be the better one to fill out Boss’s Dragons jersey. - New York Times Service