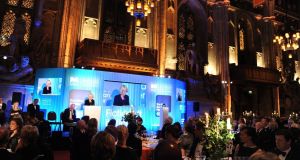 An overwhelming majority of authors in the Folio Academy, which includes Irish writers John Banville, Colm Tóibín, and Belinda McKeown, along with Margaret Atwood, Ian McEwan and Zadie Smith among its ranks, have called upon the Man Booker prize to revert to admitting UK, Irish and Commonwealth writers only, over fears of a new American dominance emerging in the prize.

Three years since the Man Booker began allowing any author writing in English and published in the UK to enter, 99 per cent of Folio Academy members who responded to the question have said that the Booker should change its rules again, with most responses citing the new ubiquity of US authors in the prize’s longlists.

After the 2011 Man Booker chair of judges, Stella Rimington controversially stressed prioritising “readability” and books that “zip along”, the Rathbones Folio prize was established that year as a direct challenge to the prestigious Booker. The Folio, which set out to reward “daunting” fiction by any author writing in English and is overseen by its academy of 300-odd members, was first awarded to US author George Saunders in 2013; that same year, the Man Booker prize announced it would widen its remit to include any author writing in English.

John Banville, who won the Booker in 2005 and originally supported the new rule, revealed he has since changed his mind. “The prize was unique in its original form, but has lost that uniqueness. It is now just another prize among prizes. I am convinced the administrators should take the bold step of conceding the change was wrong, and revert,” he said.

Saunders himself would later win the Booker in 2017, making him the second US winner in a row since the rule was implemented in 2014 – an ill omen for some critics, who believe the character of the prize has been altered by the presence of weighty US writers at the expense of unknown authors in Commonwealth countries, who previously benefitted from a Booker boost.

Golden Hill author Francis Spufford said that as major US literary prizes tended to only allow US citizens to enter, the same protections should be extended to authors from other countries. “The effect of opening the Man Booker to American writers without any corresponding shift in the rules for the Pulitzer, National Book Awards, etc, is therefore to diminish opportunities to British, Irish, Indian, Canadian, Australian, New Zealand and South African writers while making very little appreciable difference in the US,” he said. “In fact it can be argued that with the Americanisation of the Booker, American readers have partially lost a conduit to excellent writing which they would not otherwise have come across. I don’t see any winners in the present situation.”

British novelist Tessa Hadley said she felt that the Booker’s character had changed. “The Man Booker used to provide a point of focus each year for British and Commonwealth fiction: a sense that this had some identity-in-difference, and that British and Commonwealth novels were in some sense ‘talking to one another’ ... now it’s as though we’re perceived – and perceive ourselves – as only a subset of US fiction, lost in its margins – and, eventually, this dilution of the community of writers plays out in the writing.”

However, critic Sam Leith remained in favour of the change. “I think that – angry though it has made a lot of UK writers and publishers – there’s a clear literary sense in the Man Booker having as its constituency the English language, rather than a territorial remit based on a semi-defunct postcolonial trading bloc,” he said.

Ahead of the 2018 Rathbones Folio prize revealing its shortlist on Tuesday night, prize co-founder and literary agent Andrew Kidd said the data gathered from the academy would be offered to the Booker Foundation, which manages the prize. “It’s up to them to decide how to proceed, it is a tricky one,” he said. “Having canvassed the academy, we’ve had this very quick and unified response. I can see they are in a bind – having made this decision, it would be awkward to reverse it. But there is a sense, in some quarters, that voices that might have been heard aren’t getting oxygen any more.”

Kidd said that while the Folio was a response to “frustration” among writers over the Booker in 2011, the relationship between the two prizes was now “collegiate”, with the Folio further differentiating itself in 2017 by also admitting non-fiction. “We’re not saying they should change it back. It is up to them to decide. This is not about us versus the Booker, though it maybe was at the start,” he said.

In February, 30 publishers signed a letter urging the Man Booker organisers to reverse the change, or risk a “homogenised literary future”.

The Booker Foundation responded by saying there was no evidence that the prize’s diversity had been affected. “The trustees believe that this mission cannot be constrained or compromised by national boundaries,” it said.