With one vote left, it seemed Ireland wouldn’t break the ill-luck that has dogged us since 2013 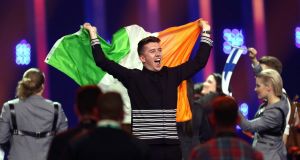 Ryan O’Shaughnessy secures a place in the Eurovision final – in Lisbon, Portugal, 2018 during the first semi-final for the Eurovision Song Contest. Photograph: AP Photo/Armando Franca

Ahoy there, me hearties, the good ship Eurovision set sail from Lisbon on Tuesday with the first of two semi-finals before Saturday’s contest.

An aquatic theme dominated proceedings, or so we were led to expect by the four tremendously well-toned female presenters whose nautical references (“Aye-aye there, captain”) were decidedly fishy and whose ultra-white collective dentistry could have guided shipping through the most treacherous waters.

The 19 entries disported themselves over a set that looked like a large fish bowl, but which unfortunately wasn’t able to gift viewers with a goldfish’s three-second memory span.

The night began with a sweet young woman from Azerbaijan, who emerged from under a cloud of dry ice wearing some nice white togs and angel wings, singing about fireworks and a love stronger than cannonballs.

She was quickly followed by an Icelandic cherub weeping into his shiny white suit about something unrequited (and quite possibly unadvisable). And on and on it went.

A young Belgian woman who worked in Ikea sang something that sounded like a diluted James Bond theme (stirred, not shaken). She was followed by a kooky bloke, wandering around the stage in a bow tie and braces, who looked like he’d escaped from a kindergarden Christmas party.

And then an equally kooky Lithuanian girl sang yet another ballad, called When You’re Old, sharing the stage with a hologram of an elderly couple who may have been representing marital longevity or may have been in an advertisement for double-glazing.

Israel, one of the favourites to win the contest, was a pretty clucking random entry, featuring a female singer making chicken sounds and insisting very loudly that she wasn’t anyone’s toy-toy, while looking like a psychedelic Russian doll.

Meanwhile, the plastic captains, our hostesses for the night, flashed their incisors and reminded us that the hashtag for the night was “All Aboard!” and a bloke from Belarus sang in a tentative falsetto to an artificial rose, seeming genuinely upset by the truly awful choreography his scarlet-frocked backing dancer was being forced to enact.

Then Estonia’s Elina Nechayeva performed an operatic vocal atop a very large animated dress that flowered and pulsed and sparkled, the pyrotechnics quite possibly putting a hole in Portugal’s national grid.

The countdown to Dubliner Ryan O’Shaughnessy performing the catchy love song Together was hotting up.

Before Ryan, the penultimate performer, we still had to wade through Bulgarian man buns, many pouting Macedonians and a Croatian woman singing about horses in the rain while simultaneously losing her mind and shooting across the sky and going crazy crazy crazy for someone to love.

Austria came and went, Greece did a bit of plaintive howling and Finland produced some mind-numbingly awful electropop aided and abetted by a bevy of sexually ambiguous backing dancers in in SS uniforms and a singer who flung herself into their possibly manly arms.

Then there was a Swiss girl in a cowboy hat with a visible navel and possibly more self-belief than musicality.

And, finally, Ireland. Ryan O’Shaughnessy was composed and calm, the song sweet, the sentiment good and hopeful and inclusive, and if the cheering from the packed auditorium was anything to go by, he deserved to make the final.

The voting came after some crucifyingly bad comedy and turgid drawing out of the voting process. The 10 finalists were announced one by one. With one vote left to go, it looked like Ireland wasn’t going to break the ill-luck that has plagued us since 2013.

“Will we announce the last contestant through to the final?” the winsome Portuguese hostesses said through their lipgloss. And, in one big fragrant breath, they shouted out the last winner of the night.