Israel's Netta Barzilai has won the Eurovision Song Contest in Lisbon, bringing Israel its fourth victory in the glitzy pageant, watched by over 200 million people around the world. Video: Reuters 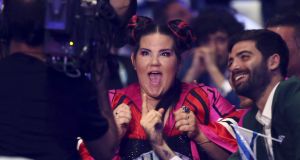 The Irish singer Ryan O’Shaughnessy finished 16th in this year’s contest with his ballad Together. Ireland received 136 points: 74 votes from the professional juries (which count for 50 per cent of the overall score) and 62 votes from the public.

Ireland’s act generated a great deal of buzz during the contest week, qualifying against predictions and then climbing as high as three in the bookmakers’ odds.

“Tonight felt amazing. I felt I had everyone in Ireland behind me,” O’Shaughnessy said after the results were announced.

“We felt such an amazing vibe and I think that was the most important aspect of our performance - we were so connected. Hearing from everyone back home and knowing that we were so supported... I couldn’t be prouder to be Irish.”

“It’s obviously unfortunate that we didn’t get the points we really wanted, but that’s Eurovision,” O’Shaughnessy added.

Here it is, the final results for #Eurovision Song Contest 2018! #ESC2018 #AllAboard pic.twitter.com/FcXZVR6zod

“Ryan produced an absolutely flawless performance. I couldn’t be prouder of the guys; they all gave their hearts and souls to the performance tonight.”

“We were delighted to give the Irish public something to smile about all week,” Kealy said.

O’Shaughnessy’s act was much talked-about for its staging which suggested two romantic stories, one between O’Shaughnessy and backup singer Claire Ann Varley and the other between dancers Alan McGrath and Kevin O’Dwyer.

The Irish delegation used the act to promote tolerance, encouraging voters to support the song with the hashtag #loveislove.

This is the best Irish finish since Jedward finished 8th in 2011. Kealy says he hopes that the strong response to the Irish act “is the start of something, the revival in the Irish Eurovision fortunes.”

Israel’s kitschy pop number Toy is a huge favourite with Eurovision fans, and evidently with the European public. Israel has competed in Eurovision 41 times and one three times before, most recently in 1998.

Cyprus song Fuego, a high-intensity pop number sung by Eleni Foureira, ran neck and neck with Israel in the odds throughout the week and was considered by many as the likely winner.

Austria’s César Sampson was the unexpected winner of the jury vote with his smooth R’n’B number Nobody But You, and placed third overall.

Germany came fourth with the ballad You Let Me Walk Alone co-written and sung by Michael Schulte, and Italy’s Ermal Meta and Fabrizio Moro came in fifth with Non Mi Avete Fatto Niente.

The Czech Republic, Sweden, Estonia, Denmark, and Moldova rounded out the top 10.

The contest took an unexpected turn when a protestor jumped onstage and took the microphone away from the UK’s singer SuRie in the middle of her performance.

Security staff wrestled the intruder off the stage and she finished her performance to a huge audience ovation. The UK declined the offer from contest producers to perform again at the end of the running order, and finished in 11th place.