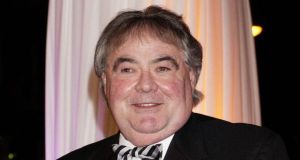 Eddie Large, who has died at the age of 78. Photograph: Yui Mok/PA Wire

The beaming, ebullient, fast-talking comedian and impressionist Eddie Large, who has died aged 78, having contracted coronavirus while being treated for heart failure, was half of a double-act that partially eclipsed Morecambe and Wise on British television in the late 1970s and early 1980s.

After years of success with the BBC had turned them into a national institution, Eric Morecambe and Ernie Wise were enticed to ITV in 1978, but through a combination of inferior scripts and Morecambe’s deteriorating health, the switch proved to be a disappointment, and marked the decline of Britain’s top double-act.

Meanwhile, the BBC groomed Little and Large to take their place in 11 series of extremely popular sketch/standup shows, which lasted from 1977 until 1991 and became a staple of Saturday evenings, attracting audiences of up to 10 million at their peak.

The shows were mostly simple knockabout slapstick and musical parody, unchallenging fare performed with style and often surprising grace – Large was a fine mimic, and the pair’s contrasting physiques resulted in some charming recreations of Laurel and Hardy dance routines.

Eddie Large was born Edward Hugh McGinnis in Glasgow, and when he was 10, his family moved to Manchester - to a terraced house opposite Manchester City football club’s Maine Road stadium. He attended Claremont Road school and tried various menial jobs after leaving school. From early childhood he had liked the idea of being a professional comedian, but had no idea how to go about it.

His comedy relationship with “Supersonic Syd” was grounded in reality and turned out to be his entry into the business. In 1963 Large was in the audience at the Stonemason’s Arms in Wythenshawe, Manchester, when Little (born Cyril Mead) was performing his song-and-guitar act.

Large, an intelligent and articulate man who always had finely tuned comic instincts, found the spectacle of the diffident and awkward Little irresistibly funny, and started to heckle him. They met for a drink after the show and discussed the comic possibilities of developing an act based around Little’s efforts to entertain the public despite constant interruptions from his portly partner.

Little and Large – there was a vogue at the time for double-acts adopting such names; Cannon and Ball being another example – began to appear at Manchester venues, including Bernard Manning’s Embassy Club in Harpurhey. They slogged around the clubs for years until they won a 1971 edition of Opportunity Knocks. But even after this, major success did not come immediately.

Over the next few years they were occasional guests on other artists’ television shows. In 1976 Royston Mayoh, a producer at Thames, persuaded his bosses to give the pair their own vehicle, The Little and Large Tellyshow, with Morecambe and Wise’s writer Eddie Braben contributing to the scripts.

In 1977 they moved to the BBC, where they stayed until 1991. Large, under his real name, wrote some of the material, and many other well-known writers joined Braben in providing scripts for the duo, including David Renwick, Raymond Allen, Barry Cryer and John Junkin. Now firmly established as stars, Little and Large capitalised on their television fame with sellout tours. They also appeared in a Royal Variety Show in 1977.

It exasperated Large when members of the public sometimes told him he was more talented than his dithering and hapless partner and that he should abandon him and go it alone. “Don’t they get it?” he would ask. “That’s the whole point of the act!”

But backstage tensions were beginning to build. Large was a perfectionist, constantly checking props and cues, while Little took a more laidback approach. Years after the act split up, Large revealed that he was constantly worried that Little would forget his lines onstage.

As time went on, their amiable and undemanding act started to look stale. It had about it a whiff of the northern clubs, while a new generation of talent was being forged in universities and comedy clubs. In 1988 and 1989 they appeared in the televised Comic Relief shows, but were missing from the next one, in 1991. The stars of that show – French and Saunders, Jonathan Ross, Paul Whitehouse, Harry Enfield, Vic Reeves – made Little and Large seem very much a part of the previous decade’s entertainment scene. Little and Large were dropped by the BBC in the same year.

They continued to tour theatres and clubs, but the law of diminishing returns had set in and Little and Large became bywords for everything that was uncool in British comedy, a sad fate for two skilled entertainers who had earned millions at the pinnacle of their success.

In 2003, Large underwent a heart transplant operation at Papworth hospital, Cambridge. It marked the end of Little and Large as a regular team. In an interview with TV Times in 2010 Large revealed that they had not spoken for the previous eight years: “He lives up near Blackpool and I live near Bristol, so I haven’t spoken to him in a long time.”

When fully recovered from the transplant, Large would never again operate at the hectic pace of the Little and Large heyday. His recent years were spent as a successful after-dinner speaker, an occasional TV actor in cameo roles, and a guest star on quiz and game shows.

In spite of their estrangement, Little and Large did eventually become friends again and reunited for a couple of TV appearances - on Ant and Dec’s Saturday Night Takeaway (2018) and Pointless Celebrities (2019).

Large was a lifelong fan of Manchester City and a keen golfer.

He is survived by his second wife, Patsy (nee Scott), whom he married in 1983, and by a son and two daughters, and three grandchildren. His first marriage in 1965, to Sandra Baywood, ended in divorce. – Guardian