Review: These two jaw-dropping break-up stories would really be better off apart 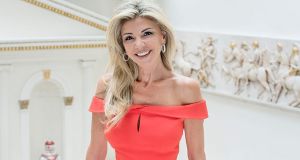 Lisa Tchenguiz, an Iranian heiress in her early 50s, to whom the years have been obsequiously kind, if love, alas, has not.

It’s a tawdry and clichéd story, I know, but that doesn’t make it any less engrossing. Two people meet and hit it off, spend all their time together and make a major commitment. But the attraction begins to flicker as they settle into a routine, and soon one of them develops a wandering eye. Another person comes into the picture, and passion flares. Let the acrimony begin.

That, near enough, is the shape of Millionaires’ Ex-Wives Club (BBC Two, Wednesday, 9pm), a documentary featuring two high-profile divorcées which itself seems to have commitment issues.

At first it seems deliciously tacky, gawping at the gilded lifestyle of Lisa Tchenguiz, an Iranian heiress in her early 50s, to whom the years have been obsequiously kind, if love, alas, has not. Twice divorced, first to the radio DJ Gary Davies and then to tinned fruit magnate Vivian Imerman (the actual Man from Del Monte), Chengez’s days are filled with scuttling servants, daily lunches and lavish celebrations of herself.

These are not entirely subsidised by her divorce settlement because Tchenguiz is of independently means (her father ran the mint for the Shah of Iran). Still, standing in a London home of almost suffocating opulence, in an outfit based on the style and proportions of a Power Suit Barbie, she admits that money cannot take the pain away.

Indeed, while documentary maker Lynn Alleway may pause to admire her lapdog’s bespoke settee, it construes a much lonelier picture. “Where are we going today?” Alleway asks, as though out of habit, and you suspect Tchenguiz is making herself far too available. The magic begins to go out.

In London, “the divorce capital of the world”, a spouse can expect to be awarded 50 per cent of the couple’s accrued wealth, which would have given Tchenguiz £120m. In the end, after a squabble over the family Rolls Royce, and Immerman’s successful case taken against her meddlesome brothers, she settled for £15.

That sum wouldn’t even cover the legal costs of Michelle Young, the younger and blonder woman Alleway takes up with, who spent 11 years seeking a settlement with her ex-husband, the property developer Scot Young. Now bankrupt, trading a jaw-dropping mansion for a basement flat, she has never received a penny.

Here Alleway’s documentary takes a sharp pivot, acquiring an interest beyond the kitsch. At one point Michelle estimated her husband’s worth to be around £400m. Claiming a mysterious bankruptcy, while making himself contemptuously unaccountable, he put that figure closer to zero. There have been 65 court hearings.

As this story gets murkier and murkier, introducing the possibility that Scot was money laundering for Russian clients, a determined Michelle goes deeper into debt. Eventually awarded £26m by the courts, which she never sees, Michelle is later offered £30m by Scot. That he will not make good on the promise comes as no surprise, but this time not for characteristic reasons. Shortly after the phone call, he plunges several storeys to his death in events still shrouded in mystery.

This story, sensational and scandalous, is material enough for a single documentary of skill and substance. Alleway, however, can’t bring herself to jilt either party: it’s 50-50. They may be held together by titillating sound bytes from London divorce lawyers, but finally the two stories don’t quite belong with each other. Breaking up is never easy, but here, at least, they might have arrived at a more amicable split.

Dublin International Film Festival: A guide to the best movies
8