The actor was unprepared for the success of the series. With season two on its way, she’d better get used to celebrity 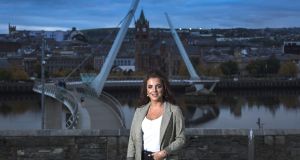 Jamie-Lee O’Donnell: “I love putting on the Christmas jumpers and big coats and going out for Christmas pints.”

Rewind back to the start of 2018 and we’d find a time when Derry Girls was still a little-known TV title, an entity for its programme-makers only. But over the course of January, it did the unthinkable and turned Britain and Ireland’s televisual attention towards the formerly war-torn city, by way of a headstrong set of schoolgirls, a bit of nostalgia, and exactly the right amount of reminding about the Troubles.

In a divine cast, also featuring the comedic talents of Nicola Coughlan, Saoirse Jackson and Louisa Harland, it was Michelle, played by Jamie-Lee O’Donnell, who stole the show with her bolshy attitude, about everything from parents (“You can’t ring Childline every time your mother threatens to kill you”) to the Great Famine (“We got the gist. They ran out of spuds, everyone was raging”).

“Derry Girls did really well really quickly, so we didn’t even have to wait for the season to finish before we saw the impact,” recalls O’Donnell, a softer and self-effacing person in real life.

“I had a few friends around my house for when it aired and they were genuinely laughing. And right away, the reaction on Twitter was insane. People absolutely loved it, and saying things like they used to be the Michelle when they were at school. She’s really fun to play.”

The accolades kept rolling in: the series earned an average audience of 2.5 million in Britain, making it Channel 4’s most successful original comedy since 2004, and it became the most-watched series in Northern Ireland.

As one of the few cast members who lives in Derry, O’Donnell sees the success in her everyday life. Indeed, she’s still working out how to deal with the attention she receives.

“I didn’t realise I’d be so intimidated by [the fame]. I never expected to be at this level for a start, and I definitely didn’t expect to get recognised, six, seven times a day, or for it to happen to my family.

“But I understand why it happens and everyone who comes up is a fan of the show. There are times that I have to say no to a photograph, like at 8.30am when I’m out to buy bread and I look like absolute roadkill. I’d probably end up breaking their phone. I’m sure it will die down at some point, but probably not until well after series two.”

We speak the day the next instalment starts in earnest. The cast have just reunited for an initial read-through of the script; filming begins the next working day. And while her lips are sealed about any possible spoilers – though rumours are about that it tackles the ceasefire and Bill Clinton’s visit in 1995 – she professes that “it’s definitely as good, if not better, than the first season”.

“Lisa [McGee, creator and writer] has really outdone herself. We hit the nail on the head for the first season so the humour is quite similar,” she says. “Already I’ve noticed that we’re more confident this time around. For the first season, we couldn’t believe our luck that we got the job, so we were quite nervous. Now we know the characters so well, so the read-through felt more fun.”

When she joined Derry Girls, O’Donnell had already achieved a strong start to her career. A Derry native, she was active in school productions at St Anne’s Primary School and St Cecilia’s College, and eventually went on to the North West Regional College.

The first in her large family to pursue acting, she spent time in Britain studying performing arts and dance at De Montford University in Bedfordshire before moving to Manchester.

The study paid off – aside from theatre roles, viewers might recognise her as the equally fiery Eva from BBC Northern Ireland’s 6 Degrees, or the theatre-turned-BBC2 piece I Told My Mum I Was Going on an RE Trip, which shed light on real-life abortion stories.

O’Donnell returned to her hometown for Derry Girls and has settled there since; as well as having her family and childhood friends around her, it’s where the 26-year-old lives with her DJ boyfriend Paul McCay.

Knocks along the way

This year, after the success of Derry Girls, she toured McGee’s two-person play Girls and Dolls, and is due to announce another theatre show in the coming weeks. As is the nature of the job, there are always knocks along the way, but with this success under her belt, the confidence strengthens her resilience.

“Like recently I went for a role in London for an upcoming show called The Farmhouse Murders,” she explains. “The script seemed fantastic, it was a great director, and the part was between a few other girls and myself. I heard that they liked my audition, but someone walked in the room and they just thought it was her right away.

“There’s just no preparing for that. You just have to go and give the best version of what you think they want, to the best of your ability. If that’s not what they’re looking for then there’s nothing you can do. Sometimes, it just doesn’t fit and that’s the end of it. As hard as it is – and sometimes you can feel quite bad after – you just have to think, onwards and upwards. So I was just happy I got to audition and I’m looking forward to watching it on TV, because it’s going to be brilliant.”

And at least means she can have some time off at Christmas – which is just the way she likes it.

“I love Christmas. I don’t have any children, so more than the day itself, it’s about the build-up,” she says. “I love putting on the Christmas jumpers and big coats and going out for Christmas pints. Or brandy – Christmas is the time of year I’d be up for having a brandy. And because nights set in earlier, it’s acceptable to go to the pubs earlier. I can’t wait for that to start up again.”

The day itself is spent dropping in to relatives’ houses to give out presents and spend time in their company. When it comes to the family dinner: “I don’t really do the cooking, I just do the eating and drinking,” she grins.

Certainly, with the monumental year she’s had, and another one on the way, there’s cause for an extra glass of celebratory brandy for O’Donnell this Christmas.