Dancing With The Stars: Same-sex celeb-pro performances are a first for Ireland and UK

‘I’ve never been so nervous in my life,’ says Brian Dowling of his ‘incredibly brave’ move 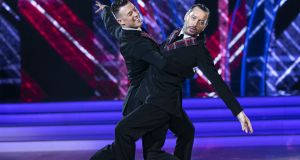 Brian Dowling with Kai Widdrington in Dancing with the Stars. Photograph: Kyran O’Brien

Breathtaking contortions, desperate floundering, huge egos wilting beneath the spotlight. Yes, thank goodness the general election is drawing to a close. And as we await the outcome what better diversion than the mildly less ridiculous Dancing with the Stars.

With so much blood on the carpet in the political sphere, DTWS is skipping eliminations this week. Instead the contestants have been challenged to switch-up and pair with another of the professional dancers. It’s crazy – do we like it?

The big switcheroo gives DWTS an opportunity to create history. Brian Dowling and Kai Widdrington dance together and Lottie Ryan teams up with Emily Barker. It’s a first for a dance series in Ireland (and the UK! the RTÉ press release trumpets). So bravo to all.

“Actions speak louder than words,” says Dowling after he and Widdrington scorch up the floor. “If this dance helps just one person \[then\] all the stress, all the pressure, all the rehearsals will be so worth it.”

However, the episode is off to a relatively gentle start. Mary Kennedy and Ryan McShane jive to Twistin’ The Night Away by Sam Cooke

“It’s great to hear a golden oldie,” says judge Loraine Barry, referring to the little jig Kennedy does around her handbag. There is a caveat, though. “When you got into the solo work it was a little bit unsure.”

“It probably needed a little more energy,” says fellow adjudicator Brian Redmond. “We only had three days– it was a lot of fun,” Kennedy ripostes.

Kennedy then takes the opportunity to pay tribute to RTÉ current affairs presenter Keelin Shanley, who has passed away. “She was so young … kindness itself, always obliging. A lovely, lovely person.” Kennedy scores 14.

Then it’s Fair City actor Ryan Andrews and ballroom champion Laura Nolan. They waltz their way through Journey’s Open Arms (what do you mean Journey have a song that isn’t called Don’t Stop Believin’?)

“The beautiful rise and flow … you were a masculine leading man on the floor,” says judge Julian Benson. “You’re just going from strength to strength.”

And then the moment we’ve all dreaded and also secretly and guiltily looked forward to. No, not another leaders’ debate. It’s Father Ray Kelly, one of the clunkiest dancers in the history of the competition and thus naturally the people’s champion.

“I have trouble moving my hands and feet together,” he explains in his introductory video. He illustrates the point as, dressed as a bus conductor, he performs a Charleston with Giulia Dotta to the National Express by the Divine Comedy.

That song holds the unique distinction of being both the most popular Divine Comedy song and also the worst Divine Comedy song. It’s a neat trick. Almost as neat as Kelly lifting Dotta and twirling her ever so slightly.

“Given the dancing we’ve seen, I’d have expected you to be the bus to Oldcastle,” says Redmond. This is a reference to Kelly’s Co Meath parish, not a dungeon complex reserved for expunged Dancing With the Stars contestants (otherwise Marty Morrissey and Des Cahill would live there and presumably share a cell).

“You’re so good together, so cute together,” agrees Loraine Barry. “It didn’t have the power … but you did all the steps.”

“He. Did. All. The. Steps,” says Jennifer Zamparelli. She is shortly afterwards rendered speechless as Benson declaims to Kelly: “I’d definitely go for a ride on your bus.” What more is to be said? Fr Ray scores 14 – his highest yet! Sing, or at least very enthusiastically hum, hallelujah.

They are followed Sinead O’Carroll formerly of B*witched (essentially a mix of the Spice Girls and the front window of a Carroll’s gift shop) with John Nolan. They perform a Viennese Walt to Guilty by Paloma Faith (the song is indeed guilty of being a crashingly unsubtle Bond theme knockoff).

“Wow, I did not expect that, says Loraine Barry. “Really good. A little bit of a timing issue ... but just outstanding.”

“The drama!” says Julian Benson, praising the “Bob Fosse, Chicago-esque” choreography. “This is a switch-up that works.”

She sweeps the board with 27.

Then it’s time for Kilkenny All-Ireland winner Aidan Fogarty and Kyle Vincent, who seems to be enjoying having the week off from Father Re stepping on her feet. They bop to Feels Like Home by Sigala.

“This has a great beach party feel to it but not up to your usual standard,”says Redmond. “Brian Cody wouldn’t’ have let you switch off at half time.” The hurler scores a below-par 18. Not so timber-licking’ good.

And then the big emotional moment as Dowling and Widdrington, in matching suits, quickstep to Out of Our Heads by Take That.

“I’ve never been so nervous in all my life,” says Dowling, revealed to be a bit of Schrödinger’s contestant in that he is simultaneously speechless and unable to stop talking.

“An incredibly brave thing to do. Not to go out there and dance with a man,” says Redmond. “That’s normal. You are brave because you agreed to take on the added pressure of being first.”

“I believe in visibility and starting a conversation,” says Dowling. “It’s the first time I’ve ever done something like this and who better to do it with that someone like Brian,” adds Widdrington.

He scores a well-deserved 23.

A less welcome landmark is reached next as we are subjected to our first Ed Sheeran song of the series. Gráinne Gallanagh, fresh from topping the leaderboard last week, pairs up with Pasquale La Rocca for a rumba to the ginger avenger’s hit Beautiful People. What’s really beautiful is that the song is only three minutes 17 seconds long.

“You put time into it – to really show off the striking girl that you are. You looked stunning tonight,” says Loraine Barry.

“This was a romantic, authentic rumba,” says Julian Benson. “You create beautiful lines ... W I would have liked to have seen is a little more commitment to the dance. Letting yourself go.”

Her score is 18 – not terrible but a step backwards from last week. “It is what it is. I get nervous,” she admits.

Such stutters are quickly forgotten as Lottie Ryan and Emily Barker bring down the curtains, and the house, with a Charleston to Meghan Trainor’s Woman Up.

“So much fun, so much sass, so much hair,” says Zamparelli. “Never mind J-Lo and Shakira,” says Benson. “The power, the energy the precision. You took traditional Charleston steps and turned it upside down on its head.”

He praises, in particular, the “remarkable splits section” and the Single Ladies “nod to Beyoncé”.

“To do it side by side with one of the pros … it’s really brave,” says Redmond. “And you knocked it out of the park.” She scores 26.

How to top that? Julian Benson does his best with his charity single Cha Cha Boom. Che-Che-cheers Julian. It’s for a good cause – the judge’s Cystic Fibrosis Foundation charity – and is accompanied by a dance routine that suggests Andrew Lloyd Webber if he was obsessed with the Matrix.

The real blockbuster action will, however, be next week as the eliminations return and with them the first celebrity dance-off. Unlike the election it’s still all to play for.