Kenny may be out of step with the restive public mood, but his interviews are memorable 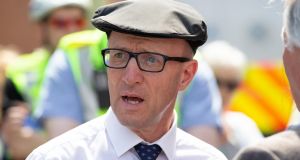 It’s the theme of the election: outstripped by a disruptive insurgent with a populist touch, the faltering establishment incumbent searches through his opponent’s murky past to uncover incriminating secrets. Sure enough, with polling day imminent, it happens: Pat Kenny comes up with embarrassing material on Ivan Yates, the rabble-rousing upstart who has displaced him as top dog on Newstalk.

On Tuesday’s edition of The Pat Kenny Show (Newstalk, weekdays), reporter Seán Defoe trawls through audio archives from previous elections, uncovering a clip from 1981 featuring a youthful-sounding Yates, then a newly elected TD, talking about his “honour and privilege” to serve in the Dáil. After listening to his colleague in such uncharacteristically modest form, Kenny can’t resist a dig. “Ivan Yates, such a humble country TD,” he chuckles. “What on earth went wrong?”

It’s only friendly ribbing, of course, but the same question could be asked about Kenny’s performance during the election. Compared to his stiffly brainy style, Yates’s scorched-earth approach seems more in tune with the restive public mood. Kenny’s interviews with the likes of Minister for Housing Eoghan Murphy have been certainly thorough, but haven’t produced many fireworks.

Requiring a late campaign surge, Kenny finally brings out the big guns and gets the memorable political interviews he needs. He also talks to Leo Varadkar. But while his encounter with the Taoiseach has its revealing moments, it’s far less absorbing than his conversations with two political mavericks, independent TD Michael Healy-Rae and Senator David Norris.

The presenter talks to Healy-Rae after a poll suggests a drop in support for him and his TD brother, Danny, in their Kerry constituency. Kenny suggests that Danny in particular could be in jeopardy, as there is less “gravy” in the form of vote transfers from Michael. Whatever about the political ramifications of this possible result, it would be a catastrophe for radio producers, who have long relied on Danny’s singular presence and eccentric opinions to liven up slow shows.

Kenny wonders whether Danny’s views on climate change and drink-driving – tactfully described by the host as “Neanderthal” – are losing votes, but Michael is hopeful that their electoral strategy will work. “We carved up the constituency in a very thoughtful way,” he says, not at all sinisterly. He then switches from mafia capo slang to salesman’s patter: “We like to think we offer a full and complete service to the people of Kerry.”

For all the spiel, he notes that his family’s defiant “us-versus-them” attitude isn’t without foundation. “We’ve been ridiculed over and over again,” he says. And while he remarks that his family “go very hard at politics”, the normally strident TD also strikes an unusually elegiac note as he urges people to vote. “Whoever you’re going to vote for, isn’t it a great thing to be able to say, ‘I exercised my democratic right’?” On this showing, no wonder Kenny is concerned the Healy-Raes mightn’t be back.

Norris is an outlier of an altogether different stripe, but similarly adds spark to the show. The Senator, scholar and long-time gay rights activist is promoting a cancer charity pop-up shop and, having survived the illness himself, reflects on mortality with deceptively flippant candour. “We’re all perishable goods,” he says. Kenny, meanwhile, indulges in typically heavy-handed banter with his guest: “Much to everyone’s surprise, you’re still here.” More work needed on that bedside manner, Pat.

When it comes to politics, Norris can still ruffle feathers. Noting the mood for change, as evidenced by Sinn Féin’s poll numbers, he bemoans the two main parties’ refusal to countenance coalition with them. “They did terrible things,” he says of the republican movement, but thinks it’s time to forgive and forget. “I mean, I got a note 35 years ago saying they’d sentenced me to death. I think it was for being a fairy,” he recalls. “They’ve changed on that big time.” If only all election interviews were so entertaining.

In comparison the Taoiseach sounds vaguely desperate as he attacks Sinn Féin. He paints the opposing party’s economic manifesto in lurid terms – “These policies didn’t work in East Germany or Venezuela” – and sounds alarm at the prospect of Sinn Féin appointing judges. At times like this, Kenny’s informed style is put to good use, as when he asks if Varadkar had any idea of former FAI chief executive John Delaney’s dubious practices when he was minister for sport. “No,” comes the forlorn-sounding reply, undercutting his sense of authority somewhat. Raising the temperature may work for ambitious broadcasters and nonconformist politicians, but it’s not a great move for established incumbents.

Over on The Last Word (Today FM, weekdays), Matt Cooper heads into the election’s home straight by finishing his series of interviews with party leaders. Cooper prefers to politely but insistently question his guests rather than ferociously grill them, but his encounters are illuminating nonetheless. For one thing, the Taoiseach sounded more composed when Cooper spoke to him earlier in the campaign than he did on Kenny’s show.

The final round of interviews throws up some telling moments too. Richard Boyd Barrett of Solidarity-People Before Profit welcomes the fact that people want to follow his party’s slogan and “break the cycle”, but concedes Cooper’s point that he and his colleagues may be swept away in the process. Meanwhile, Aontú leader Peadar Tóibín strikingly characterises his former colleagues in Sinn Féin as “a party of maximalist opposition”, while setting out the credentials of his own, avowedly anti-abortion party. “We stand outside groupthink,” Tóibín says earnestly, using a phrase that signifies groupthink of its own, generally involving complaints about politically correct liberal elites.

Throughout it all Cooper knows when to press and when to hold back, with effective results. Presenters don’t have to choose between disruption and authority. Sometimes they can get the balance right.

Rugby legend’s try at hurling
On Tuesday’s Morning Ireland (RTÉ Radio 1), sports reporter Darren Frehill previews Ireland’s rugby clash with Wales in unusual fashion, by playing a clip from Sunday Sport’s coverage of the 1982 All-Ireland hurling final. The recording features youthful-sounding presenter Michael Lyster talking to Welsh rugby great Gareth Edwards, who commends the skill and toughness of the hurlers. “Would you fancy being down there on the field with a camán in your hand, slashing it about?” Lyster asks his guest. “Well, I wouldn’t like to be down there without one,” comes Edwards’s instant reply. Hat’s off to Frehill for unearthing the clip – sometimes the old ones are the best.

Gawping at other Irish people’s houses. It’s who we are
6