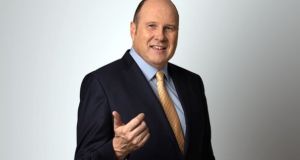 Former radio show presenter Ivan Yates made ‘dismissive remarks about the Government and the HSE’s ‘stay at home’ guidance dealing with the pandemic’, the complainant said. Photograph: Newstalk

Newstalk said its former presenter Ivan Yates could be “perceived” by some to be “harsh or reckless at times”.

The comment was made by the station in response to a complaint to the Broadcasting Authority of Ireland (BAI) over remarks Mr Yates made on his former programme The Hard Shoulder last April about Covid-19 restrictions.

The complainant said Mr Yates made “dismissive remarks about the Government and the HSE’s ‘stay at home’ guidance dealing with the pandemic”, according to details published by the BAI on Wednesday.

“The complainant claims that the presenter questioned the validity of the guidance and flippantly encouraged a lack of compliance.

“The complainant also considers the presenter degraded the lockdown with what he deems to be Trumpian ‘Leo’s lockdown’ phraseology. The complainant found the presenter’s comments lacked responsibility and recognition of the importance of these life-saving guidelines.”

In response, Newstalk said Mr Yates has “always called things as he sees it and is of the view that it would have been a disservice to all those who tune in to hear his honest and blunt take on matters of the day, to silence him at such a significant time”.

Mr Yates stepped down from his presenting role last week and said he was planning to move back to Enniscorthy, Co Wexford with his wife.

The BAI rejected the complaint along with 11 others during May and June. It said the format of the programme is such that “the presenter provides his own view regarding issues, often in a robust manner”.

“In this regard, the comments made by the presenter were in line with audience expectations in the context of the format of the programme,” it said.

Separately, a complaint was made to the BAI regarding the way in which a section on domestic violence was presented on RTÉ’s Late Late Show on April 10th.

The show featured domestic violence survivor Jessica Bowes who was violently attacked by her former partner in 2015 and required reconstructive surgery.

The complainant said by featuring women only in the segment, “the programme gave the impression that victims of domestic abuse are exclusively female, and the perpetrators are exclusively male”.

“The complainant claims that by its content and presentation, the programme was not balanced in that it gave a one-sided story,” the BAI noted.

RTÉ said it “rejects completely” the complainant’s claim that this part of the programme suggested that domestic violence was an exclusively male act against females.

“The broadcaster maintains that the presenter’s introduction to this item was entirely gender neutral. At no point did the presenter mention men or women,” the BAI’s report states.

“Further, the broadcaster notes that it is a fact that domestic abuse impacts women more than men, and, for that reason, it was entirely appropriate to feature a female victim and a representative from Women’s Aid.”

The BAI said the broadcaster retains editorial freedom and may choose which contributors it features on a programme, “along with the approach and format adopted for the programme”.

“Further, the forum noted that the discussion remained gender neutral and did not find that the programme was rendered sexist or biased due to the fact that men were not specifically mentioned or interviewed during the programme,” it added.