A €29k cottage? A €90k church? One woman’s search for Ireland’s cheapest houses 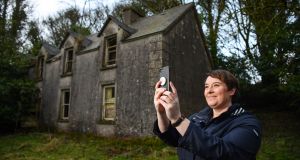 This may sound like the pricelist from some circa 1972 estate agent’s books, but these are current listings, as confirmed by one Maggie Molloy. She’s a woman with something of an interest in the area. These and other properties in a similar price bracket are at the heart of her steadily growing online business.

“It all started in 2013,” explains Molloy. “That’s when I finally got mortgage approval.”

Mortgage approval-in-hand, Molloy set off on a house-hunt. Along the way, travels in search of a home within her €100,000 price range prompted a new hobby for the Wexford native. Noticing a lot of “forgotten” houses dotted throughout villages and the countryside, she started to take pictures of old, derelict buildings whenever she came across them.

She set up an Instagram profile. People started to make contact, asking if particular houses were for sale. Molloy set up another profile, featuring pictures of properties on the market for under €100,000, with links to the relevant estate agents. That profile – Cheap Irish Houses – now has 46,000 followers, and Molloy is currently in the middle of recording a related six-part series for RTÉ. It’s due to be aired in April.

“I’ve always had a love of old houses,” Molloy explains. “The whole Instagram thing, and now the series, started with my own experiences of trying to find a place I could afford and what I discovered along the way.”

In the early stages of her own house-hunting, with mortgage approval for €110,000, it hadn’t really crossed Molloy’s mind that she might have difficulty finding something within her budget in Wexford. Having suffered from homesickness for a few years when she worked away after college, she was itching to re-settle in her home county.

Her needs were simple. She wanted a little house in the Wexford countryside, but the Wexford property market said a resounding “no”. A little house on an estate? Nope, bit beyond budget. A derelict cottage even? Not a hope so close to the commuter belt.

“Initially Wexford was definitely where I wanted to be, but I just couldn’t afford it. My search started to expand to surrounding counties and beyond.”

Getting over her homesickness, Molloy widened her search into Carlow and Kilkenny and even ventured as far as Roscommon, before finding a two-storey farmhouse with outbuildings, on half a hectare (1 acre), in north Tipperary. It was within her price range. She made an offer and six years later it’s still home, but now also office and workspace to her and her husband, who she married a year ago in the garden of that home.

“People are really interested in property. When I started up on Instagram, it was just a hobby. I was trying to help people out.”

Molloy’s Instagram mission was to bring a bit of life back into budget properties that needed some TLC and new owners. It was, she says, a bit slow at first, but then it started taking off. “Now if I don’t put something new up every day I get messages asking why.”

Each featured property gets a personal description and comment from Molloy. Every entry is her own choice, a subjective collection of what she finds appealing. She’s not sponsored, her comments are independent. The response has been so strong that she now offers a weekly paid subscription newsletter (at €5 per month) which includes a wider range of properties besides those featured on the Instagram feed.

It is, she says, a subjective selection. What captures her imagination might not be everyone’s cup of tea.

And what are the things that catch her subjective eye when she’s making a shortlist of homes to feature on the Instagram feed?

Her own experience comes into play. When she settled on her own home, for example, she knew she was taking on a big project, but felt the solidity of the building made it feasible.

While the inside was a “concrete shell”, it was dry, the roof didn’t leak and the setting was idyllic. It was in the countryside, but if she walked across the fields, in just five minutes she could get to a village with pubs, a national school and other amenities.

“One of the things I look for is easy access to services. So having an available electricity supply, water, septic tank or whatever. Something with a garden or a bit of land, that can grow with you, or that you can do up over time, is another plus.”

You must, she says, use your imagination to see the potential in many of the houses that feature. Some people, says Molloy, will see an overgrown site and think it’s not for them. You’ve got to open your mind.

Another of her recommended advantages of buying a property at an affordable price is that if it’s in any way habitable you can potter away at the renovations at your own pace, without the burden of massive debts.

Over the years Molloy and her husband have been in the house, they’ve had some financial ups and downs. Hur husband, a former plumber, has re-trained as a graphic designer. Molloy works as an illustrator. Cash is not always in abundant supply, but the pair haven’t gone into further debt. Even in dry work spells they’ve managed to keep on top of the long-term, ongoing project that goes hand-in-hand with owning a big old country house.

One of the most satisfying aspects of it all has been, in Molloy’s words: “helping real people with real needs”. She has kept in contact with a number of people who found their forever home via her Cheap Irish Houses.

She’s keen to explain that she is not an estate agent and has no involvement in the direct sales. However she does do some consultation work and can help people starting out on what can be an arduous and time-consuming process.

She’s anxious to respect people’s privacy, but she describes one couple who had saved and saved to get a deposit together for a house in Dublin. When they found their dream home (in need of work) on the Instagram feed, they decided to take the plunge. For the price of the deposit they had saved - that would have been a downpayment on a modest home in Dublin - they were able to buy a substantial property outright.

Molloy is keen to maintain a sense of integrity about her most recent engagement. When she was approached about doing the TV series she had to stop and think. She agreed, on the condition that she would look for houses based on her own criteria.

“It’s a huge life decision for people. I made it really clear that I didn’t want it to be a vanity project or some search to find celebrity holiday homes or fill communities with transient tourists or whatever. Of course you want money coming into a community, there are positive sides to that, but most importantly it needed to be about helping people.

For some it can be a very private experience and one that makes some people quite vulnerable. Everyone’s situation is different. People will sacrifice a lot for home. You have to be careful about that.”

Core blimey: How a 62-year-old man planked for eight hours
5