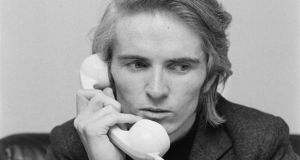 Ronan O’Rahilly, the founder of the celebrated pirate radio station Radio Caroline, has died at the age of 79.

Mr O’Rahilly revolutionised commercial radio in 1964 when he set up Radio Caroline outside UK territorial waters and broadcast to the mainland.

The station, which played the pop artists of the day, broke the monopoly that the BBC had on radio in the UK.

At the time BBC did not take the pop and rock music revolution seriously and only broadcast an hour a week of pop music programme.

The setting up of Radio Caroline inspired the 2009 Richard Curtis film, The Boat that Rocked.

Mr O’Rahilly came from a wealthy background. His parents owned the private port of Greenore which allowed him to fit out a ship to broadcast.

His grandfather was Michael O’Rahilly (The O’Rahilly) who participated in the Easter Rising and died off Moore Street on the last day of the Rising.

Mr O’Rahilly was born in 1940 and emigrated to the UK in the 1960s where he set up the Scene club in London’s Soho district.

He also managed musicians Georgie Fame and Alex Korner and the Australian actor George Lazenby who had one turn as James Bond.

When Mr O’Rahilly discovered that the BBC and Radio Luxembourg, its only commercial competitor though based in continental Europe, were only playing artists by certain record labels, he founded Radio Caroline.

He discovered a loophole in the strict radio licencing laws at the time which he later explained in a BBC Arena programme: “A small survey on the south coast has been carried out and it has been established that if a ship was parked off the coast, three miles outside, the whole f***ing country would tune in and turn on.”

Radio Caroline still exists as a radio station off the Essex coast and they paid tribute to him on Monday.

Broadcaster Johnny Walker, who made his reputation on the station, described Mr O’Rahilly as the man “who made the impossible possible and changed radio forever.

“Thanks Ronan for the incredible experience of being a Caroline deejay and to challenge the Government. You were an amazing man.”

Dire Straits’ founder member David Knopfler paid tribute to Mr O’Rahilly who said had been instrumental in “promoting Dire Straits when we most needed it and for that we will ever be grateful”.

Mr O’Rahilly was inducted into the Hall Of Fame at the PPI Radio Award in 2012.

He moved back to Ireland in 2013 after being diagnosed with vascular dementia.