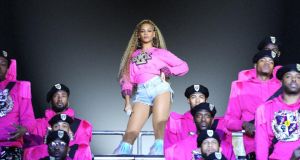 “Instead of me pulling out my flower crown, it was more important that I brought our culture to Coachella,” Beyoncé says in Homecoming, the new documentary about her landmark performance at the California music festival this time last year, which has just landed on Netflix – alongside a surprise 40-track live album of the set that also dropped today.

Beychella, as it came to be known, was a showcase not only for the singer but also for African-American culture. Staged to mimic a homecoming at one of the United States’ historically black colleges, it featured a marching band, majorettes, fraternity pledges and step-dancing. The set sampled Nina Simone, Fela Kuti, Dawn Penn, Juvenile and Fast Life Yungstaz, among many other black artists. It also included Lift Every Voice and Sing – the United States’ “black national anthem” – as well as the words of Malcolm X and even Queen Nefertiti.

Which is to say it was new terrain for a festival usually associated with fringe tops, peace signs and, yes, flower crowns – so much so that Beyoncé’s mother had worried the set’s references would be lost on the predominantly white audience. (Beyoncé told her she had “a responsibility to do what’s best for the world and not what is most popular”.)

After watching her sing, sashay and swag-surf for two hours, you’d be hard pressed to name a greater living entertainer

The result upped the ante for live music and reimagined what a festival show could look like. After watching her sing, sashay and swag-surf for two hours, you’d be hard pressed to name a greater living entertainer. “I studied my history, I studied my past and I put every mistake and all my triumphs from my 22-year career into my two-hour homecoming performance,” the singer says in the new film, which credits her as a director, writer and executive producer.

Like the live album, Homecoming features the full set, switching so seamlessly between her performances at each weekend of the festival that the only way you can tell one from the other is through her different ensembles.

Between the musical performances we are brought behind the curtain to the spartan sound stages where the show’s bold concept took shape: Beychella was the culmination of eight gruelling months of rehearsals, and we see Beyoncé pushing herself and those around her to their limits.

Indeed, the film hammers home how much input she had in everything the world wound up seeing on stage, both conceptually and musically. “Every tiny detail had an intention,” she says. Beyoncé, we learn, is a perfectionist to the extreme.

The singer was initially due to perform at the 2017 festival, but she had to postpone her appearance after becoming pregnant with her twins, Rumi and Sir – a pregnancy she opens up about in Homecoming. “My body went through more than I knew it could,” she says. “I was 218lb” – 15st 8lb, or 99kg – “the day I gave birth,” she says. “I had an extremely difficult pregnancy. I had high blood pressure as well as toxemia” – aka pre-eclampsia. “In the womb, one of my babies’ heartbeats paused a few times, so I had to get an emergency C-section.”

To get fighting fit, she abstained from bread, carbs, dairy, sugar, meat, fish and alcohol. She juggled dance rehearsals with breastfeeding, and fought the urge to stay at home with her newborn babies. It is here, when she sets out the odds stacked against working mothers, that Beyoncé is at her most vulnerable and relatable. “I definitely pushed myself further than I knew I could, and I learned a very valuable lesson. I will never push myself that far again.”

Watching the Coachella set is like taking a Berocca: an instant burst of energy and effervescence. If you’ve been forced to make do with grainy versions of the concert ripped from YouTube, Homecoming is a home-entertainment experience par excellence.

The film is also a love letter to historically black colleges and universities – aka HBCUs – including footage from homecomings at Jackson State University, in Mississippi, and Grambling State University, in Louisiana. Indeed, Beyoncé dedicates the documentary to those institutions.

“So many people who are culturally aware and intellectually sound are graduates of HBCUs, including my father,” the singer’s note reads. “There is something incredibly important about the HBCU experience that must be celebrated and protected.” In the credits, she thanks them for “promoting and elevating our culture through education”.

Last year Beyoncé dared to bring a celebration of black culture to Coachella. Now she has brought it to a streaming audience of millions. She is pursuing something bigger than herself, and educating and entertaining the masses while she’s at it. We’re just lucky to be able to witness it.