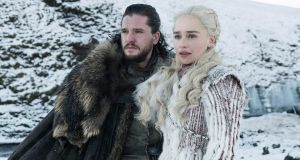 Game of Thrones: setting up for the endgame. Photograph: HBO

So, where were we?. . . It has been almost two years since we watched the Wall come tumbling down in Game of Thrones (Sky Atlantic, Monday, 2am and 9pm). That vast and formidable border between the Seven Kingdoms and the icy reaches beyond Westeros had become the last thing separating the living and the dead.

Now the Night Walkers approach, although with no sight of them yet, that allows the opening episode of the eighth and final season of the world’s most absorbing distraction to concentrate instead on matters of survival – principally shelter, sustenance and sex. That’s all reassuring. There’s life in this series yet.

It’s no secret that we’re heading for a showdown, although even in a clash between zombies and dragons, the greater confrontation may still be among family members.

The episode begins with a mass procession of Daenerys Targaryen’s armies, where the Dothraki hordes and phalanxes of Unsullied given a frosty reception, but otherwise stand up well to the Winterfell cold.

As Arya Stark watches discreetly from the crowd, it’s hard not to see this march of familiar characters as her own personal “previously on” recap. There’s the ultimate power couple, Dany and Jon, the Mother of Dragons and her controversial supplicant, the former King of the North. There’s the Hound, Arya’s one-time captor and surly sidekick. There’s Gendry, bastard son of a king, capable blacksmith, old mate.

Actually, it’s an episode full of reunions and brisk catch ups: such as Tyrion and Sansa, still technically a married couple, but who haven’t laid eyes on each other since Joffrey’s wedding/assassination. “Miserable affair,” notes Tyrion. “It had its moments,” quips Sansa. The Lady of Winterfell is a much changed character; not only more savvy than Tyrion’s professional cynic, dismissing the idea that Cersei will join them, but also getting the better lines.

Indeed, just as grain, fuel and weapon supplies are being carefully rationed in preparation for a siege, so the show’s zingers are distributed quite equitably. “What do dragons eat anyway?” Sansa asks, sceptical of Dany and annoyed to find so many fortress crashers. “Anything they want,” Dany replies.

“Look at you,” Jon says to his long-separated half-brother, Bran, “you’re a man!” “Almost,” replies Bran. Since becoming the Three-Eyed Raven, he is actually something else: a powerful seer with the gnomic humour of a man who knows all the spoilers.

Dany and Jon are still in the dark about one thing, though: the fact that they are blood relatives, which dooms the romance between aunt and nephew (the true heir to the throne, remember) to either a treasonous breakup, or, at the very least, an excruciatingly awkward conversation. For the moment, though, it’s hard not to be happy for them, watching the fur-clad couple embark on a dragon-mounted joyride through the tundra (facilitated by improved, stomach-dipping special effects). “You’ve completely ruined horses for me,” says Jon. He may regret the ride.

In King’s Landing, the royal seat of villainy, people area little more heedless. Nothing seems to motivate the dastardly over-actor Euron Greyjoy more than getting laid, which, upon delivering Cersei a mercenary army and his iron fleet, he does. While indisposed, his long-suffering, slowly-redeeming nephew Theon frees his sister Yara and resigns to join the fray. “What is dead may never die,” Yara counsels him. That nails the show’s predicament. “But kill the bastards anyway,” she adds. That nails its spirt.

Reeling from the death of his own family, at the hands of Dany and the breath of her dragons, the gentle, scholarly Sam must break the news of Jon’s true identity to his fellow former Night’s Watchman. “I’m sorry, I know it’s a lot to take in,” Sam tells Jon, or rather Aegon Targaryan, the bastard turned leader, the once-and-future king, the resurrected saviour. It says something about the wit of the writing, by Dave Hill (whose own rise on the show, from production assistant to head writer, has a similarly Targaryen trajectory), that the most grandiose message should come from the most unassuming character.

There, in the catacombs of Winterfell, beside the statue of the man Jon believed his father, you can appreciate how much we’ve all grown over a decade of Game of Thrones. When another hugely transformed character arrives, to find the boy he once pushed from a window waiting for him, now “almost” a man, showrunners David Benioff and D.B. Weiss appear to be doing what the book’s author, George R. R. Martin, seems unable to do. They’re drawing its many plot threads back together. For avid watchers, the implication is bittersweet. The show’s endgame is now in sight. The Game’s pieces are in position.

Béatrice Dalle: ‘I’ve never thought I’m beautiful, but I have a power of attraction’
9