Registrations this year have so far fallen 20.5%, with used imports also down 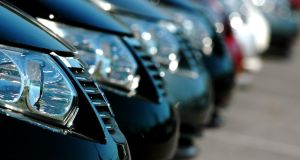 New car sales tumbled 63 per cent in March compared to the same month last year as the spread of Covid-19 prompted the motor industry to close showrooms and cease other activities.

Some 6,174 new cars were sold in March, compared to 16,687 in the same month in 2019, with registrations so far this year down 20.5 per cent, according to data from the Society of the Irish Motor Industry (Simi).

Used car imports for the month were also down, falling 48 per cent to 4,656. So far this year there have been almost 35 per cent fewer used cars imported to the State.

“The motor industry and its employees, like so many industries, is feeling the devastating impact of Covid-19,” said Simi director general Brian Cooke.

“Even before the crisis commenced the new car market was in decline, and this fall has accelerated rapidly in the last fortnight, with new car activity down nearly two-thirds on last year. Whatever the duration of this crisis, once we emerge we will need to see decisive and ambitious action from Government to protect the nearly 50,000 jobs in our sector.”

Diesel sales continued to decline, falling 27 per cent on last year with 22,375 sales. However, the category still accounted for the largest share of the new car market, with 43.8 per cent.

Some 19,600 petrol vehicles were sold, down by more than a quarter on last year.

Toyota remains the best-selling car brand in the Republic, with 6,230 registrations, representing a 12.2 per cent market share. It was followed last month by Volkswagen on 5,727, Hyundai with 5,118, and Skoda with 4, 390. Ford overtook Nissan for fifth place.

Significant growth was seen among some of the premium brands, albeit from a considerably lower base than the mass market manufacturers. Tesla’s sales so far this year have risen to 358 compared to 22 in 2019, while Porsche has seen growth of 243 per cent, although that represents a total of 55 vehicles registered this year.

Meanwhile, the best-selling model remains the Toyota Corolla, with 2,424 registrations, ahead of the Hyundai Tucson with 1,976, and the Volkswagen Tiguan with 1,667.

Heavy goods vehicles sales have risen 12.6 per cent to 993 so far this year.